Mazda's third take on The Answer to Everything, now available from £4K

The first hint of the third generation NC

came with the unveiling of the Ibuki concept at the 2003 Tokyo motor show. It was a further two years before Mazda launched the replacement for the popular NB model in mid-2005 after an initial reveal of the production model earlier that year at the Geneva motor show. 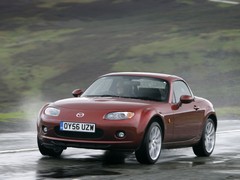 At first glance the NC was more of the same, but under the skin it was a much more thorough re-interpretation of Mazda's high-selling sports car. The basics were still the same: a relatively lightweight two-seat open top with classic front-engine, rear-drive set-up. Mazda was never going to tamper with this, but in came all-new Ford-sourced 1.8- and 2.0-litre petrol engines with 126- and 160hp respectively. They offered 0-62mph in 9.4 seconds for the 1.8 and 7.9 seconds for the 2.0-litre. The 1.8 cost from £15,600 and the 2.0 started at £16,600.

Also new was the multi-link rear suspension design that was aimed at further enhancing the MX-5's famous handling balance. Many motoring journalists felt the NC had taken a backwards step in handling and steering response, though much of this was down to personal grousing rather than any fathomable, objective reason. 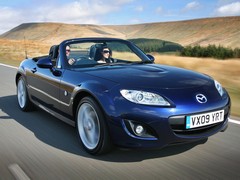 In the summer of 2006, Mazda further pushed the NC into new territory with the launch of the

. This replaced the usual fabric roof with a folding two-piece hard-top that retracted into the same space as the soft-top to retain the same boot capacity. Widely referred to as the RC, the Roadster Coupe tipped the scales at 40kg more than the 1,139kg soft-top models.

To answer those critics of the NC's handling and steering, a revised NC2 model pitched up in October 2008. The front roll centre was lowered to improve turn-in and cornering feel. It also has lightly reworked engines, which increases the rev limit from 6,750rpm in the 2.0 to 7,000rpm. Engine sound was also improved, while a new six-speed manual gearbox was also fitted. Restyled headlights are the obvious exterior clue to the NC2 over the original NC. 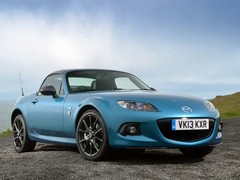 Another revision of this MX-5 resulted in the NC3 being announced in July 2012 and on sale for the 2013 model year. It has reworked headlights and a more prominent front air intake to mimic those of the CX-5 and 6 models, while a new chin spoiler improves aerodynamics. The NC3 also comes with Mazda's Active Bonnet that uses explosive charges to push the bonnet up and away from the engine in the event of a pedestrian collision to better protect the pedestrian's head and torso. There was also a modified throttle for the six-speed manual gearbox models to give sharper response, while all NC3s benefitted from a new brake return control to give better pedal feel.

There have been a plethora of special editions based on the MX-5 NC models. For the UK, this has included the Special Edition Launch model, Icon, Niseko, 20th Anniversary Limited Edition with a production run of 2,000 cars, Miyako, Kendo, Venture, Kuro and Sport Venture.

We won't go into the equipment upgrades of each of the special editions, but will instead concentrate on the standard SE and Sport models that make up the bulk of used NC MX-5s for sale. With prices now dipping below £4,000 for early NCs, the Mazda continues to offer reliable sports car fun on a tight budget and they needn't cost much to run.

PHer's view:
"I found my MX-5 to a fantastic car to use as a second car - having a blast cross-country was brilliant. Handled great and went pretty well too. It loved to be 'wound up'."
Phil Grover