. It had 1300 orders banked, complete with £1000 deposits, by the time the first car was delivered to its owner in August 1996. In theory, that should have been the first three years' production accounted for, but by this stage Lotus' management had decided to up the output from 400 cars per year to 2500.

Much of the Julian Thomson-penned Elise's early success stemmed from its superglue handling, unerring steering feel and brisk, if not outright fast, performance. These factors were helped by an all-up weight of just 723kg for the early car. Here was the true British sports car successor to the original Lotus Elan, so ably aped by the Mazda MX-5 that showed there was still massive demand for simple roadsters. 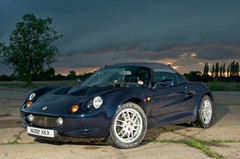 Brett may think it looks best in the dark...

Another key factor in the Elise's runaway success from the off was its price. The original and basic 1.8-litre car started at £18,950, though most buyers added extras such as leather seats, metallic paint and front driving lamps to push the price above £20,000.

Only a handful of Sport 190s were built, and it was soon followed by the more affordable Sport 135 in 1998. It cost £28,950, covered 0-60mph in 5.8 seconds and had a 127mph. Production numbers for the Sport 190 and 135 models are included in the overall figures for the Series 1 Elise, of which 8,613 were made between 1996 and the last one leaving the showroom in 2001 as the S2 Elise arrived. Lotus also supplied 180 completely knocked down kits to its parent company Proton for assembly abroad and eight GT1 Elise-based racers were produced with a 3.5-litre V8 and power up to 550bhp. 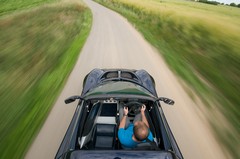 The Sport 160 was the final version of the Elise based on the basic model. It had 160bhp to give 0-62mph in 5.0 seconds and a top speed of 129mph. There were also the Exige models based on the same chassis as the Elise, the Sport Elise with 203bhp 1.8-litre engine that cost £55,000 for a season's racing, and the stripped to the bones 340R. However, here we'll concentrate on the Elise S1 rather than its more exotic derivatives.

(PS. Please share general comments, thoughts and feedback about Elise S1 ownership on this article thread. For specific comments about any of the 'detail' topics listed above - they've all got their own threads. Cheers! Ed.)