Unloved as 911s go, the 996 can be a used sports car bargain if chosen carefully

is one of the most seminal models in this car's development. While the purists huffed at the switch from air cooling to water cooling for the flat-six engine, this change guaranteed the 911 a future in a world where emissions and noise regulations simply made an air-cooled engine an anachronism. 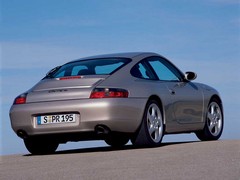 What Porsche came up with in when it unveiled the new 996 at the Frankfurt Motor Show in September 1997 was a car with the same silhouette but it was 190mm longer. There was also a lot in common with the Boxster from the A-pillar forwards.

However, the engine remained out at the back, but the water cooledwater cooling allowed 3.4-litre unit produced 300hp. Four valves per cylinder were standard and a first for a mainstream 911 model, while power was delivered via a six-speed manual or five-speed Tiptronic auto gearbox. The Carrera 4 with all-wheel drive pitched up towards the end of 1998 and was offered in both Coupe and Cabriolet forms. 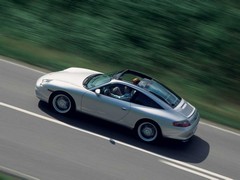 At the same time as the new engine, Porsche changed the original 'fried egg' headlights to units with the Turbo's headlight design to differentiate the car from the Boxster. There were also new bumpers and the Cabriolet gained a glass rear screen. A Targa version also arrived with a retracting glass panel.

Late in the 996's life, Porsche added the Carrera 4S in Coupe and Cabriolet bodies. It offered the wide body style of the Turbo, along with that model's brakes and suspension set-up but the standard 3.6-litre motor. Many regard this as the ultimate standard 996 and it's spotted by the full width rear reflector.

By 2004, enough stories of engine problems were emerging for the 996 to earn a reputation as a 911 designed by accountants and it was replaced by the 997. Partly due to this reputation and partly because there are simply far more 996s out there than its predecessor, the much sought after 993, this first water-cooled 911 represents superb value for money and cars start from as little as £8,500. Picking a good one requires a little more effort, but you'll be hard-pressed to spend more than £23,000 on even a low miles C4S. The Turbo and limited production 996 models fetch more money, but for this guide we'll stick with the standard models.

PHer's view:
Wonderfully nimble car and utterly faultless. Apart from regular servicing it was perfect. Put on a roof rack and took my bike to triathlons up and down the country so really can be used as a daily. Only sold it because I was doing 23,000 miles in a year and it was having an horrendous impact on its value.
Philipp Neatsmith