As DTM fans will know, the bonkers 190 Evo II is far more than a Merc in a bad bodykit

Big enough wing for you, sir?

The smell of glass fibre resin can do strange things to a man. And when bodykits come to mind we've all seen the effects of an overactive imagination and an inadequately ventilated garage inflicted upon otherwise innocent motors. 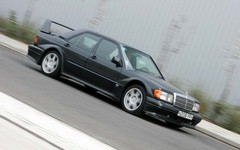 In that context, the Mercedes 190E 2.5-16 Evo II looks like the result of a particularly long night in a lock-up and an apparently endless supply of fibreglass sheeting. Blessed with a wing that would make even the most ardent modder blush, a chin splitter low enough to chisel cat's eyes out of the tarmac and blistered arches that look like a bad afterthought, to the uneducated the mad Merc looks like a relic from the heyday of the dearly departed Max Power.

PHers aren't uneducated, though, and hopefully the bodykitted 190 will be recognised for what it is - namely one of the most extreme homologation specials to ever be unleashed on the public road. But extreme in a very Mercedes way, because for all its bewinged madness the 190 Evo II is still a Merc to its core.

The Evo II's bodykit is perhaps the most outrageous ever applied to a production car and the fact it was a product of the ultra-conservative world of early-90s Mercedes-Benz is even more incredible. But when it comes to competition, Mercedes doesn't mess about, especially when it comes to beating BMW. The 190 had to win. And it had to win against one of the best touring cars of all time - the E30 M3. Compromise was out of the question. 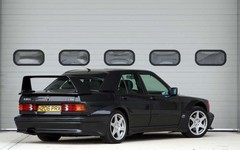 A brief timeline, then. When the 190 appeared in 1982 it was a big move for Mercedes, the relatively edgy styling and sophisticated multi-link rear suspension as significant as the arrival of a BMW-chasing 'baby Benz'.

Initial plans for a sporty 190 to underline its youthful appeal were to rally it, but a change of tack to track competition resulted in the famously Cosworth-enhanced 2.3-16 in 1985. This was followed by the 2.5-16 in 1988, the bodykitted, revvy 16-valve 190s incongruous in the Mercedes range, but popular nonetheless.

Mercedes was keen to race the 190 in the DTM and other touring car competitions and, in 1989, the 190 2.5-16 Evolution homologation special appeared. Superficially similar in appearance to the regular 2.5-16, a bigger rear wing, 16-inch versions of the standard wheels and bigger inner wings and arches to accommodate racing wheels were significant changes. Ditto the revisions to the engine that meant although the overall capacity was similar, the Evo engine was in fact reduced in stroke and much more oversquare to allow a higher race rev limit. Three-stage height adjustable suspension, bigger brakes and quicker steering finished off the hardcore spec. 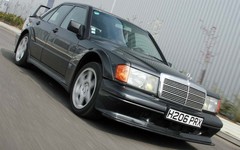 Parked alongside a regular 2.5-16, the Evo mods are obvious, but in isolation only the clued-up can tell it apart from the standard car.

No such issue with the Evo II from the following year. Like the Evolution, 502 road cars were built to satisfy homologation rules, the mechanical spec similar, but the addition of a wild bodykit and bespoke 17-inch wheels offering the presence the Evo so obviously lacked.

Even today the Evo II's looks are astonishing, the pumped-up Merc bristling with aggression and looking like it was trying to intimidate the M3 Evo into second place before even turning a wheel.

As we all know though, the M3 isn't a car to be underestimated and it's a measure of how good the BMW was that Mercedes went to such extraordinary lengths to beat it. 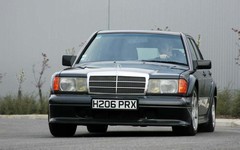 Push hard and the 190 responds eagerly

Like all 16-valve 190s the Evo II has a clattery, cammy idle that doesn't inspire confidence in its mechanical wellbeing. The dark, oppressive interior is, again, much like any other 16-valve 190 bar a number on the gearstick and a little switch beside the headlight control to adjust the ride height on the hydro-pneumatic dampers. Race Evos had automatic, computer controlled roll bars too, the road car getting a simplified version of the adjustable suspension but fully tweakable aero should you find downforce balance lacking on that final roundabout on the way into the office.

Anyone who's ever driven an M3 will talk of almost telepathic connection between driver and controls. In comparison, the 190 is an ergonomic mess, the pedals widely spaced, the flaccid dog-leg gearbox baulky in engagement, the clutch imprecise and the steering - still recirculating ball in the old Merc style - lacking in feel.

Smooth progress in the Evo, as with any 16-valve 190, takes time and dedication to perfect. This is not a car that welcomes you in with open arms. You have to adapt to its quirks, not the other way round.

It is comfy, though, the oppressive darkness of the cabin offset by leather that still feels factory fresh, the beautifully supportive Recaro seats gripping you hard and all the bells and whistles you'd expect. But as your eyes flit from the star on the bonnet to a rev-counter redlining in the high sevens, you realise this isn't your usual wafty Benz.

By modern standards 235hp isn't much. But despite the sense it's built from inch-thick armour plate, the 1340kg Evo II weighs nearly 50kg less than a Renaultsport Megane 250 and, suitably prodded, makes exciting progress.

Incredibly exciting, it turns out. All hot 190s are cammy, revvy beasts, but the Evo II feels stronger throughout the rev-range, erupting into a truly dramatic top-end howl as that maximum 235hp is deployed at 7200rpm. Keeping it in that sweet spot takes planning and a heavy right foot, the Getrag 'box's dog-leg pattern finally making sense, even if the pedal spacing never feels entirely intuitive.

As befits its racing pedigree, the Evo II only really comes alive in the very upper reaches of its performance envelope and, all of a sudden, those wild looks seem entirely appropriate. It's brute force against the elegance and balance of the M3 but, boy, driving the Evo hard is every bit as dramatic and entertainingly incongruous as the looks suggest. Once loaded up the steering has real feel, this and the surprisingly compliant suspension making it an effective road weapon and, when pushed, still a seriously rapid car.

The looks may be an acquired taste, but the driving is a lot easier to appreciate, ditto the provenance of driving a car that squared up to the legendary M3 on equal terms. Reason enough for those aware of the Evo II's charms to value it highly, a mint example recently selling for nearly £70K and even barely average ones making half that. That's more than double what Evolutions go for, the II's mad, bad looks and uncompromising character clearly a huge draw still, nearly 20 years after those epic battles on track.

Thanks to Mark Donaldson for supplying the featured car