We'll be driving a new Subaru this week, but before we do let's celebrate a blast from the brand's past...

Before we go any further let's make it clear: we're not about to initiate a 'what's the greatest Impreza?' slanging match. Crumbs, the debate about what's the best classic Scooby alone is more than toxic enough to be getting into here. 22B? Exotic and super hardcore. RB5? That Burns connection and arguably the closest to the Impreza as all-round, usable four-door B-road weapon. 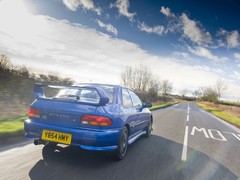 But we're focusing here on the P1. Not because it's necessarily the best Impreza ever built. But perhaps because it neatly embodies all that's wonderful about the classic Impreza in one single package.

Definitely not SOTW
With regular Impreza Turbos entering Shed Of The Week territory, now is the time the more exotic and celebrated versions like the P1 should start appreciating a little. As well they ought, because it's a truly wonderful car.

It's also a celebration of the British love affair with the Impreza, symbolising an era where not one but two British drivers won world rally championships in Prodrive-preparedSubarus. The cachet of Prodrive's involvement in the P1 only adds to the provenance, the P1 name a reflection of the fact this was the firm's first road car project. 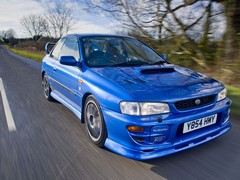 It's more than 12 years now since the P1 first appeared and it's a measure of how far things have come since that you can get an all-wheel-drive Golf with nearly as much power as the P1's official 280hp. And that, as much as any reason, is why the market for hot Imprezas is a shadow of what it once was.

Back in the days of 18-month waiting lists for new Impreza Turbos, there was nothing else offering comparable bang-for-buck. But with hot hatches getting hotter and the arrival of cars like the 370Z and Cayman, the niche inhabited by Imprezas and Evos has got smaller and smaller.

And though the P1 is little over a decade old, the classic Impreza dates back almost twice that - getting into one today it feels truly like a car from another era. A recent one, admittedly, but definitely from a slightly different age. 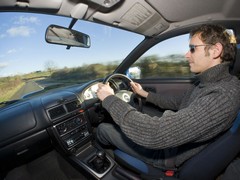 It's evocative as ever though, that brilliant view of the road framed by slim pillars and, of course, the back of that trademark bonnet scoop, resplendent in WR Blue. You could only be aboard a Scooby, the wing-backed blue buckets and flashes of pink STI badging livening up the otherwise workmanlike Impreza cabin. Yup, there are cheap plastics about, as per any Japanese car of the era. But the bits you hold or touch are solid and tactile, the mechanical interface thing very, well, mechanical.

Creating the P1 meant losing some of the JDM Type R STI's fancier bits, the adjustable centre diff among them. But, strictly limited 22B UK aside, this was the first two-door Impreza you could buy officially in the UK, instantly elevating the P1 above regular saloons and wagons. True purists may prefer to stick with the Japanese market rarities, but the P1 leaves few questions unanswered, the Peter Stevens designed bodykit and anthracite OZ wheels giving it a unique look. It's also telling that the tyres covering them are only 205 in section, this relatively modest rubber the same as that employed by the forthcoming stripped-out version of the new BRZ. In both cases it's a welcome riposte to the idea that grip is the be-all end-all. 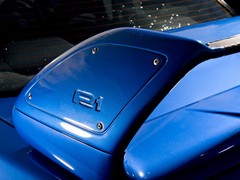 An Impreza is about grip, of course, but the P1 doesn't forget tactility and an ability to entertain. And it sounds brilliantly raw, the Scorpion exhaust on this example giving just the perfect amount of trademark flat-four warble.

It spools up with real urgency too, the throttle response noticeably more aggressive than a standard Turbo or even WRX of the era. The noises are brilliant, a hard-edged exhaust note overlayed with a whistle of turbo - a perfect accompaniment to performance that still feels potent. And it revs too, if not with quite the manic enthusiasm of some JDM versions.

But it feels really light and responsive. Modern hot hatches may boast similar power outputs, but many are also carrying another couple of hundred kilos over the P1's 1,275kg and you really feel it in the way the Impreza bounds along, eager to carve up the kind of B-roads cars like this were built for. And it feels really compact compared with more modern cars, this and the superb visibility giving you bags of confidence. 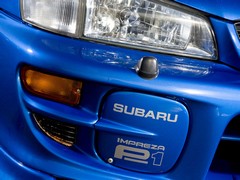 Like any classic Impreza, you want to get it turned in before you really get on the power and, though fast enough to respond, the front end has never been the old Scooby's strongest point. Once pointing the right direction you can really lean on it hard and a settled Subaru is a very, very rapid one.

The P1 ran 20mm lower than standard Turbos on Eibach springs, STI dampers and standard Turbo anti-roll bars and Prodrive's influence means it rides well over the lumps and bumps of yer typical British B-road. Only the brakes let it down a little, recognised by the fact Prodrive also offered an AP big brake kit as an option and later included it on the uprated WR version.

It's not how fast you go, it's how quick you get there
Topping out at 155mph, the P1 isn't about top-end bragging rights. Focus more on that 4.7-second 0-60 time and you see where this car's talents lie - on the road the P1's pace is right where you want it. It's the kind of car you strike up a rhythm with; perhaps not the manic, frenzied attack of an Evo but a slightly more nuanced approach, working with the terrain rather than just pummelling it into quivering submission. It may be feeling its age, but a P1 and a twisty backroad are still a pretty compelling combination. 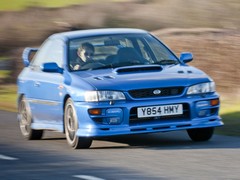 Which goes to explain why they still command a healthy premium over 'lesser' classic Imprezas. Crossroads Subaru, agents for this particular car, say you can pick them up for six grand or so now but wouldn't advise it. A low mileage, original one like this could cost double that, though, and the mintest of the mint could cost up to £15K, so it remains a reasonably committed purchase.

Though true fans like Crossroads are still flying the flag for the hot Subaru , it's hard to avoid the sense the world has moved on slightly from glory days in which the P1 was conceived.

That's fine - fashions change after all. But the concept of the P1 remains as valid as it ever was and the things we always loved about the classic Impreza - its charisma, its unique character, its appropriateness to UK driving conditions - are still as relevant today as they ever were.

Which is why, if you're going to pin your colours to one mast in the Impreza world, the P1 makes as good a case as any. And remains a worthy PH hero.