So, you want a Caterham - great choice. But which one should it be? 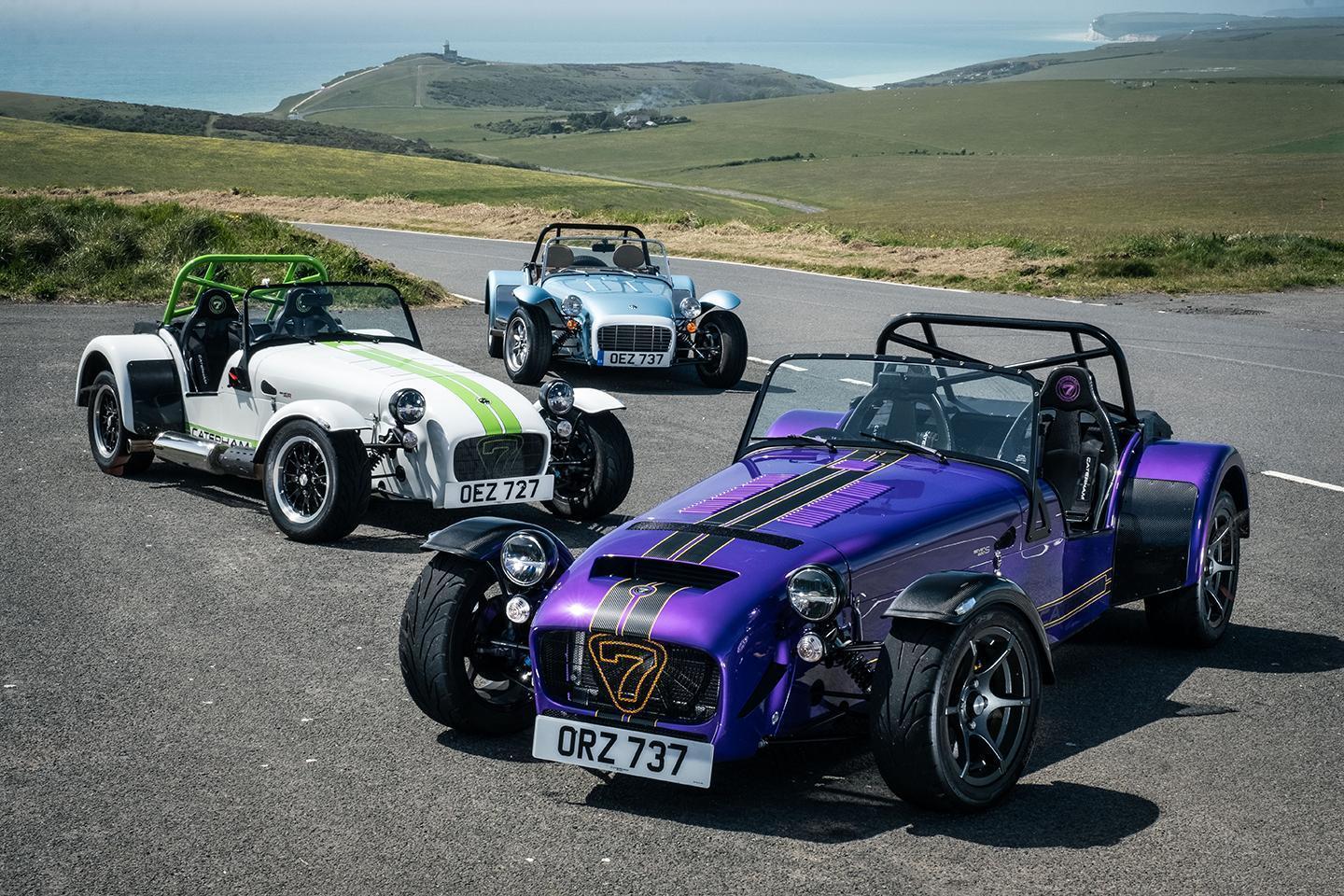 There’s never been a bad time in the past half a century to buy a Caterham 7, but 2021 feels especially apposite. Not only have the past 15 months served to remind us all how vital it is to live life while we can, there’s the future of fast cars to think about as well. When even Caterham is considering a Caterham without an engine, it’s clear that pretty seismic change is coming. As electrification and automation become more prominent themes in automotive, so a car that hardwires its driver to the mechanical experience will appeal even more to a select few. Us, basically.

Moreover, it’s Caterham or nothing, surely, for those eyeing up a 7. The British sports car industry is globally renowned for the quality of its sports cars, but the Caterham is still arguably unmatched. The latest Ariel Atom is utterly superb, but imposes even greater usability restrictions on its driver; a Westfield would be cheaper, but notably less famous; Morgan doesn’t seek to deliver quite the same involvement; and even though an Elise in its dotage remains a wonderful thing, the exhilaration of a 7 remains uniquely captivating - there’s nothing like it.

Hence comparing Caterham with Caterham; the decision to be made is much more likely to be Super 1600 vs. 310 R than it is Seven against Plus 4. The supercharged 620S is here to see whether it’s worth paying extra for performance that makes you weep. Consider this in-depth consumer testing, PH style; especially if you’re eyeing up a Seven for trips to the seaside to get an ice cream - because that's exactly what we did.

A brief reminder of the cars. The Super 1600 is the most recent, launched last year as “the new old school” and with DCOE throttle bodies, the wider body and a look inspired by the seventies. It’s powered by the 1.6-litre Ford Sigma engine - as is the 310 R, which has had its peak power increased by 17hp to 154hp courtesy of naughtier camshafts, a new air filter and ECU work. The 620S has more than double that (!), 314hp in total, thanks a to supercharged 2.0-litre engine, again from Ford. This 620S is the less intense supercharged Caterham, with the wider track and softer suspension than the 620R; it also has a manual gearbox in place of that car’s sequential transmission. It’s also less intense than the R in the same way that a base jumping is less intense than skydiving.

But we’ll get to that. The test begins in the 310R, a 7 pitched as the successor to the old R300 and referred to by many as the sweet spot of the range - it’s fast enough to be fun, without being so maniacally rapid that every drive is a lesson in restraint. And although a story is more engrossing when refuting accepted beliefs, the 310R is a fairly compelling little Caterham.

Beyond needing more space inside (they were definitely bigger pre-lockdown), it’s a pretty hard car to fault. Those after four-wheeled nirvana, the unfettered joy of a naturally aspirated engine, a manual gearbox and rear-wheel drive, need look no further. It remains as habitable as a prison cell and as hard to get out of, but there really is no roadgoing joy quite like a racy (yet not rabidly fast) 7.

The engine needs coaxing into life and a few prods of throttle to help it idle, making a distinctly ordinary Ford four-cylinder feel a lot more special. Even when warm it idles lumpily and grumpily, desperate to have several thousand revs showing rather than just several hundred. The nature of a Caterham means that even a non-turbo diesel would feel urgent - making almost 100hp per litre from a 1.6 means it’s insatiably frantic, goading you towards peak power at every opportunity. Look at the stats against the Super 1600 for how it feels: there’s a noticeable improvement in power (at higher revs) but precious little extra torque, the 310’s output gains really needing revs to prove their worth. Which it’s an absolute joy to indulge, of course, a screaming little twin cam getting faster and faster and angrier and angrier as it rips to 7,500rpm, even if it’s hamstrung a tad by the five-speed manual - second will take you to 70mph in a car only just capable of 120. It still feels like the six-speed would be a better fit for the rev-happy character.

Otherwise, the 310 is bliss, with just the right amount of power to exploit what the 7 does best. Which is, specifically, drive whichever way you so desire. There’s power to make neat and precise feel really fast and exciting, and just enough torque for slow in and silly out if that takes your fancy. All with absolute clarity about exactly what the car is doing through pedals, wheel and seat, without a drive setting or Drift Mode in sight. The 310R remains an absorbing experience on a great country road - any road, in fact - a reminder that driving really can be an absolute pleasure when the car itself is so unfailingly excellent.

After it, the Super 1600 feels like climbing aboard a yacht after a day’s white-water rafting. There’s space to move (the 1600 is only available with the wider S5 chassis; this 310 is a narrower S3), there are luxurious accoutrements like carpet and direction changes seem somewhat more ponderous - not helped by a wheel that could be twice the size. It isn't actually ponderous by any standard gauge, but the 310’s immediacy makes anything short of a superbike seem like it's coming up short.

The more relaxed remit means it doesn’t reward the same approach as the 310R; its front end is less grippy (note different tyre treads) and its rear less precise without the limited-slip diff. But no bother; this is meant as discrete, Morgan-rivalling kind of Caterham anyway, and it suits a different driving style. And by any other standard than a direct 310R comparison, it’s a joy through bends, with great brakes, joyous steering and the agility conferred by a 600kg kerbweight. Although the joy of this 7 is the engine, snorting and snarling through those throttle bodies like something your dad would call a proper sports car.

Consequently, and perhaps even more than the 620, the Super 1600 is a Caterham that’s most rewarding in a straight line. Partly since it doesn’t handle as sharply, but mainly because, as well as being amply fast, the sound reminds us all why internal combustion must be preserved and protected like the endangered species it feels close to becoming. There’s more to enjoy here in one zip from 2,000rpm to the limiter than a thousand upshift parps or a million blink-and-it’s-gone 0-60mph runs. This isn’t to deny the future, but space must be kept for this sort of thing as well. The way a Super 1600 gurgles, gargles, barks and growls through seven thousand revs is nothing short of gleeful; in this respect the manual is the perfect accompaniment. It’s more expensive and slower than the 310, yes, but don’t be at all surprised if a bigger smile ends up on your face - especially when you're not taking things too seriously.

Which brings us to the 620S. Which is not about smiling - not until you’re out and safe, that is. After the other two training exercises this is the real battle; you’ve been shown what to do, only it’s all rather more serious now. With potentially quite severe consequences if it goes wrong.

Perhaps that’s overstating it a bit, but the fact that the 620 remains pretty intimidating after a day with other fast, very light cars says a lot. It’s obscenely quick, rushing through revs and gears and scenery like a Fast & Furious montage - then you find there’s still an inch of throttle to go. And some more wheelspin. And swearing. Then, actually, something strange happens. Because despite the fear, you line up another go, emboldened by survival, and there comes a point where exhilaration finally wins out over intimidation, and you start enjoying the prospect of a car powered by a bomb. It is, after all, still a 7 - you’re still there feeling and controlling every last thing that’s going on, collaborating with the car like the best of partners; there’s just an awful lot more going on than before…

If the Super 1600 encourages a more relaxed pace and the 310R feels pert and precise at any speed, the 620 - even as an S rather than an R - demands all your attention, all the time. Partly because of speed limits, and partly because Avon’s finest are always fighting a losing battle. A bigger engine means more weight, which means a balance that’s ever so slightly less perfect, too, but with that famed adjustability even easier to manipulate thanks to the torque.

That’s the key to the 620; once over the initial shock (or at least with it lessened), you can appreciate the traits that make all 7s great. And power becomes a lot less intimidating when it’s clear you have absolute control over what happens; nothing should ever really come as a surprise. Apart from when second gear is actually fourth. But every range-topping Caterham has been overpowered; it doesn't mean it has to be overwhelming. And that’s a pretty intoxicating offering.

In the same way that 10 per cent beer is pretty intoxicating every now and then, though, the 620 is probably not the Caterham to recommend for even semi regular use. Not only do cars further down the range feel better suited to the chassis’ abilities, it becomes hard to ignore the Ariel Atom 4 if you really need more than 300hp in a skeletal sports car, because that really is epic on the limit. The Caterham is hilarious because it has too much power; the Atom is brilliant because it feels built around 320hp, rather than being in thrall to it. Yet still weighs as much as a flip-flop.

That said, the steroidal effect is missed when switching back. For all the 310’s sweetly matched power, performance, grip and traction, it can feel to err little more heavily on the side of outright purchase; for a car as perfect over the limit as a 7, it’s almost missed opportunity. And brilliant though it sounds, angrily rasping all the way to almost 8,000rpm, the Super’s noise is even better still.

Probably, and perhaps predictably, the ideal 7 is likely a combination of everything you see here. Something that drives a lot like a 310R, sounds like a Super 1600 and goes, if not quite like a 620, then with the edge that a 2.0-litre motor brings. And that car doesn’t exist. However, a 420R does, priced from just £1,000 more than the Super 1600 and with a naturally aspirated version of the 620’s supercharged engine. As the finest exponent of what a 7 can really do - fast yet forgiving and endlessly engaging - it might still be the best. But of the cars present on the day, the 310 is hard to fault, and keenly priced. Really though, everyone is a winner because no matter which flavour you opt for, each 7 retains the ability to entertain and enrapture like precious little else. So maybe one of each?