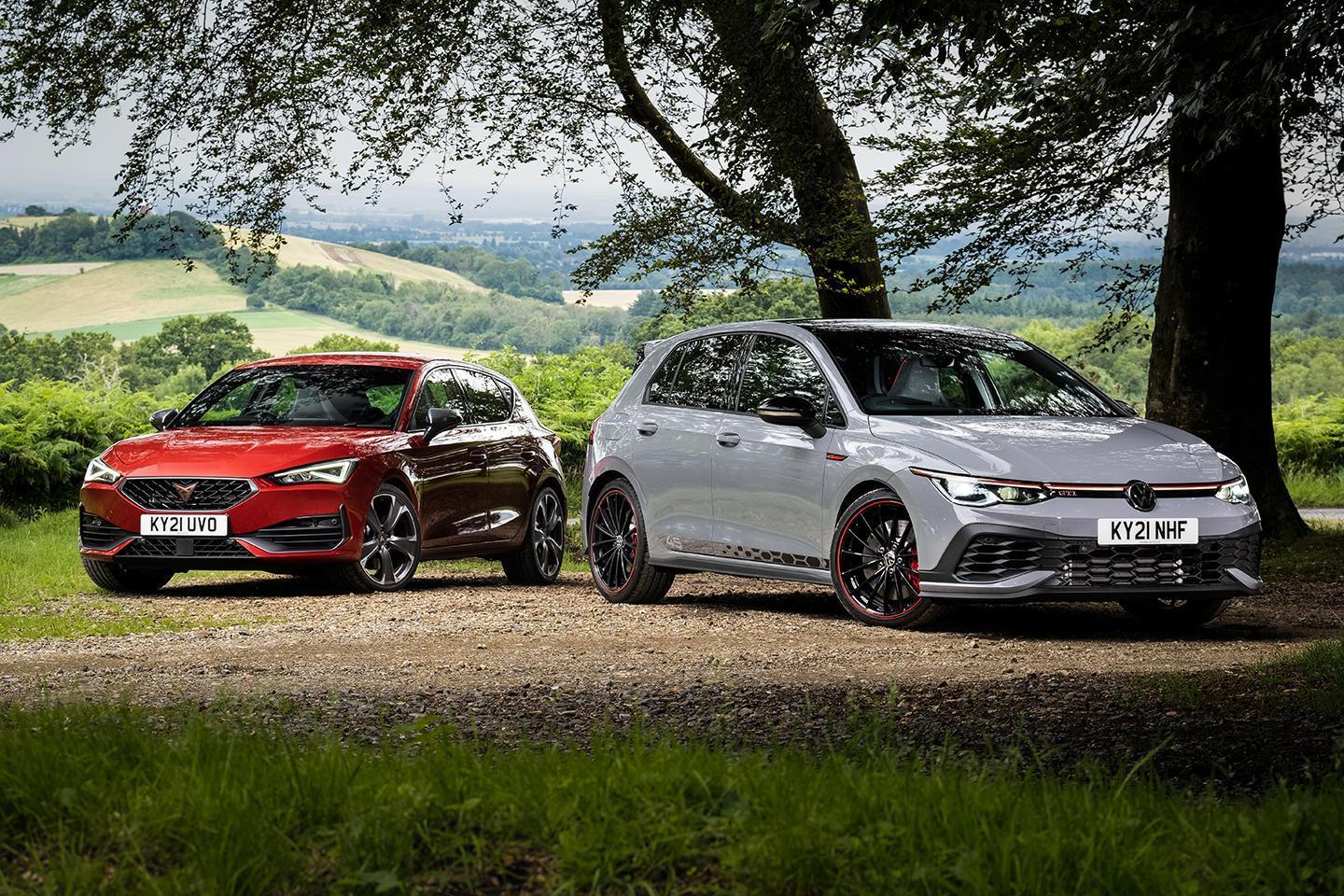 For more than 20 years now, a fast SEAT Leon of some kind has taken on the Golf GTI, having taken quite a lot from it. The results of sibling rivalry have been mixed. Back when the Golf was at its nadir - remember the 115hp Mk4 GTI? - the Leon burst onto the scene with the 20VT, later the first Leon Cupra. Back when SEAT was cool and had those awesome old Ibiza rally cars, the Leon was cheaper, faster, better looking and much more yellow than the Golf, with a minimum of 180hp - rising to 225hp for the final Cupra Rs. Perhaps it still wasn't the most rewarding drive in the world, but that first Leon emphatically announced the Cupra SEATs to the world. And made the Golf look really staid.

Then the next one came along, and undid a lot of that hard work. Despite using the much-improved Mk5 Golf underpinnings, SEAT housed them in a weird MPV-esque shape; it was cheaper than the GTI once more, though the VW walked it on desirability. Even a Cupra R with 265hp couldn't fully resolve the situation thanks to a choppy ride. So call that 1-1, then, if Mk5 and Mk6 Golf are combined. In their most recent iterations, Golf and Leon were almost impossible to separate: there were three-door, manual, front-wheel drive ones, Nurburgring record-breaking ones, five-door DSG ones and even four-wheel-drive estate ones (if the Golf R is included). Where the Leon was cheaper, the Golf was plusher; the SEAT more powerful on paper, the VW just as fast.

But that was the old days, and at no point has 2014 looked longer ago than when comparing Golf and Leon. You can't buy a manual Cupra Leon anymore, and the days of three-door Golf GTIs are done as well. Nurburgring lap records seem as much a priority for VW and Cupra now as diesel convertibles, so notable has the sea change been in automotive trends. One might wonder if, rather than one being better than the other, they're actually worth considering at all.

Alright, that's a tad facetious. But the fact is that five-door, automatic hot hatches are the ones that sell, so - guess what - that's what VW is going to build. And the Golf GTI has proven nothing if not a capable addition to the segment thus far. But outright excitement has been in short supply. Maybe the Leon is the car to provide it: once again it offers more power for little more money than a GTI in an attempt to prove Cupra can make cars more enthusiast-worthy than just SUVs and electric city cars.

The latest, best version of this Golf GTI is the Clubsport 45. It matches the Leon on power with 300hp and has impressed with a sharper driving experience than standard. As it well should, for £40,000; yes, a non-anniversary Clubsport would have been a better match and, yes, there was a healthy options spend on this particular Golf but, as they sit here, the two cars are separated by £10,285. Which is crazy, really, even when you account for the comparative rarity of one versus the other.

Fortunately, the Golf does a good job of justifying some of the premium in the metal. It looks like a proper hot hatch, for starters, where the Leon is unassuming to the point of anonymity. The Clubsport's ride height, spoilers and exhausts set just the right tone, whereas the Cupra logo sits a little awkwardly on quite a conservative hatchback shape. It's far from an ugly car, but even four exhausts and a sort-of diffuser can't make it look sporty. Subtle and discreet is good; plain is not.

The Golf leads the way on the interior, too, though primarily in being slightly less infuriating than the Leon. As a VZ2 model (rather than the VZ3 estate we tested recently), this Cupra goes without the steering wheel-mounted mode toggle or ESC switch ahead of the start button. Sounds minor, but to have four drive modes - and the 15 different suspension settings in each - accessible only through a sluggish touchscreen is daft. Yes, you won't change settings as often as you do gears, but having them within easy reach encourages exploitation. As it is, the Leon tends to be left in Sport as a catch-all compromise. The Golf, along with a mode switch on the centre console, has better seats - again, as might reasonably be expected - and the carefully engineered impression that it is delivering a bit more on the quality front than the Cupra.

In a way, the Leon drives how it looks: there is sporting intent and ability, but it's all delivered quite modestly and inoffensively. The willingness of the powertrain and the relative pliancy of the chassis mean you're soon carrying great speed - without much idea of how it's happened. There's decent traction, nice balance and good body control, which makes it all the more frustrating that the driver feels kept at such a distance. It should be noted, in addition, that a few details made this car feel less impressive than the LHD car tested in May; that car had both the Brembo brakes and Bridgestone tyres (this car had standard calipers and Hankook rubber) which lent some extra bite in every sense.

If there's a very good hot hatch inside the Cupra waiting to get out, the Golf makes an impressive case for being it. The Akrapovic exhaust may not actually make any extra noise (yeah, really) but otherwise the GTI is all to the good. Turn-in is more urgent and more trustworthy, the tweaks brought in for the Clubsport - negative camber increase, new control arms, firmer damper bearings, plus a unique steering tune - feel their worth within a couple of bends. The differences are subtle, perhaps, including slightly better brake feel (with Clubsport-specific pads and calipers) as well as marginally better wheel and body control: thank the reworked dampers, and perhaps the forged wheels. But they are noticeable, and very welcome.

In fact, back-to-back driving shows what an improvement the Clubsport upgrades have delivered; everything that the Cupra does well - and there's plenty - the Golf does that bit better. Torrential rain on test day only magnified those advantages. As the Leon struggles a bit to transmit its power to the road, so the GTI more decisively apportions the same torque. The Golf stays true to its line as the Cupra begins to wash out; you can brake later and more confidently into bends, then accelerate sooner (and just a little bit faster, thanks to shorter gear ratios) out of them. And it isn't like the Golf is some hardcore hotshot that loses out on duller journeys.

Still, the Cupra Leon is hardly lagging behind; very similar performance and a very similar platform means it's never far from the Clubsport's exhaust pipes, even if the experience is less finessed. To some, its moments of raggedness might be construed as a bit of character, but it's hard to argue with the Golf's more measured way of doing things, especially when neither is going to fizz with feedback quite like the best in the class.

Which, in fact, is how these two end up feeling a little conflicted. It's clear they are more objectively capable cars than the ones they replace - see the Golf's 7:54 'ring lap time as proof, and their ability to get 300hp down in the rain - but without a significant uplift in terms of thrill. A Megane or a Civic or an i30 all leave an impression that never quite materialises in either of the VW Group cars, even if in many areas both the Golf and Leon can objectively match - or exceed - what others are capable of. It's the intangible side of a great hot hatch where they come up short. And this is significant when the previous overriding reason for buying - unimpeachable ergonomics and switchgear placement - have been undermined.

Nevertheless, all things considered, the Cupra is more than decent. Fast, dynamically proficient, and good value, there's plenty to recommend. Yet on this experience, it doesn't do enough to force its way to the top of the hot-hatch rankings, which is disappointing when the whole reason for Cupra's being is to make a bigger splash among quality opposition. Easier said than done perhaps, given the outgoing Civic Type R's death-grip on top spot.

For now at least it is still left to a high-spec Golf GTI to provide the VW Group's most convincing pretender to the throne. Its chassis modifications have created a more eager and more engaging driver's car from the MQB box of bits than the Cupra without impinging on its viability as everyday transport. Let's not forget, either, that the 45th is mechanically identical to the £37k Clubsport; the Akrapovic looks cool but doesn't really add much, and once the £785 dampers are added there's a Golf that drives as smartly as this one for £2k more than the Leon - a premium it easily warrants.