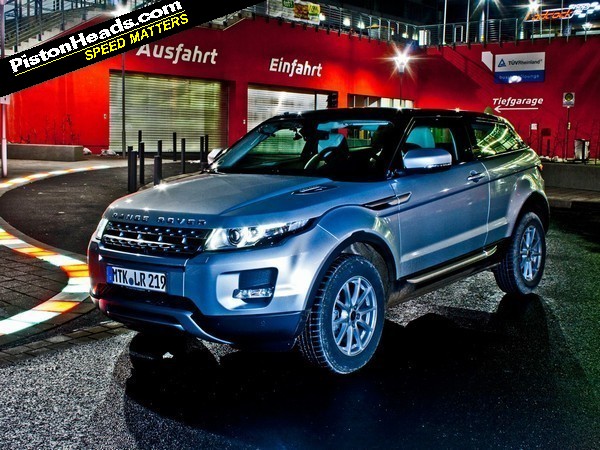 This is what a class traitor must feel like. I've never wanted a Range Rover, never even thought about one. Cars should be fast or practical. And certainly not two metres tall with an automatic gearbox. And yet here I am, driving around in an

and bloody well enjoying it too. I feel like a lifelong socialist winning the lottery and buying a mansion with a heart-shaped swimming pool. 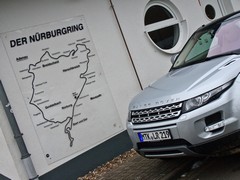 Snow no show scuppers plan A

The plan for the Evoque is to take it for an irreverent, hoon-tastic lap of a snow-covered Nordschleife. Kinda like what Dan did

the other
day in Finland

, but with bells on and real armco to dodge, not just snow banks.

Where's the snow then?
Everything looked bloody perfect too; cold front approaching fast, massive snowfall predicted by every single weather site and Range Rover confirming it had the full-monty, 240hp turbo, Si4 available to pick up at zero notice.

Of course, we arrive a week ahead of the snow. Typical. But the lack of white stuff means the Nurburgring is open for tourist laps. 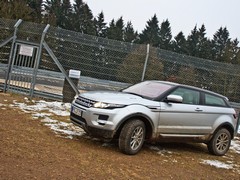 Evoque impresses on 'ring and off

A gearbox and engine that feel a little bit over-keen on the road make a bit more sense surging through the cones and onto the Nordschleife and the Evoque's lack of body roll is amazing. The brakes are less so, and only just able to keep up with the power and weight.

Gearbox in S and suspension on Dynamic, the steering feedback actually encourages you to chop the throttle and oversteer into a corner. Close to two tonnes of roll-over-risk insanity. The acceleration alone is enough to raise a grin - no way should a 2.0-litre automatic SUV be chasing a BMW 330i down the back straight. But it does. And then we overtake into the next corner...

So to the Sudschleife...
Only when stopped, inhaling what's left of the brake pads, do I look at the ground clearance and chunky 17-inch winter tyres. Why stop with the Nordschleife? 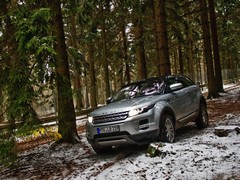 Deep in the Eifel forest are parts of the 'ring that, technically, it's not possible to drive any more. Not only are they fenced off from the public behind big signs promising prosecution and worse, but they're not even connected to the outside world any more.

Sections like the old Sudschleife, or south loop. Much of it is now a public road, the K72 from Mullenbach to the Lindner complex. Drive it for yourself and you'll see it's a frustrated race track. Other parts were ripped up in the early 80s to lay the new GP track over the top.

But nestled between the L93 and the current GP track are stretches of the original 1927 circuit. Were one to drive an Evoque on such hallowed ground, trees within arm's reach, I'm sure it would send a shiver down the spine, especially imagining what it would have been like to race a 500hp-plus GP car down here. Obviously I'm not allowed to poke the Range Rover through a narrow gully and over a two-metre dirt embankment, so you'll have to check out the computer simulation of how it would look to drive the old Sudschleife in an Evoque... 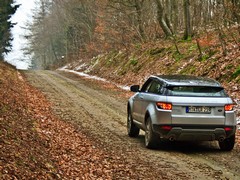 Next stop on this imagined tour is the amazing

Nearly 300 metres of concrete climbing 100 metres with, maths fans, a sturdy 33 per cent gradient. Accessible today only by a narrow forestry lane with deep, tractor-gouged ruts. And the sort of thing an Evoque on winter tyres would easily shrug off, were one to attempt it. I wouldn't, obviously. It's illegal.

Nor would I then drive the Evoque, without any dramas whatsoever, up a one-in-three gradient on slippery concrete. Or go back down again, practically hands-free on the Hill Descent Control. Just as well, because heading down a slope like that covered in icy patches towards a massive steel gate and oncoming Nordschleife tourist traffic with no feet on the pedals would be quite scary. I imagine.

To then be able to take the same car, caked in mud and ice from this fantasy off-road tour, and go out for another lap on the Nordschleife would be incredible. Enough to overturn a lifetime's anti-SUV prejudice. And perhaps crave that heart-shaped swimming pool too.