The Korean manufacturing behemoth is new to hot hatches, but the i30N has easily enough early promise to take the fight to Seat's lusty Cupra

Consider for a moment the size of the hill Hyundai's new N division has had to climb. The Korean firm's previous enthusiast ventures (remember the Coupe? Or Veloster?) have proven either false starts or dead ends. Instead the manufacturer has marched triumphantly into the sunlit uplands of colossal volume production, and rather left the idea of performance variants to others. Ultimately, of course, this was never going to be good enough: in Europe, Hyundai grades itself on VW Group's curve, which was always eventually going to mean engaging with much more than a buyer's sense of value. 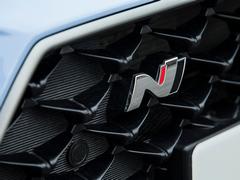 Thus a performance sub division was born. It's not quite a standing start of course: Hyundai has been going rallying for a few years now, most notably in the WRC. But the i30N is its first properly branded road car. And this time around, the brand has really put its shoulder into the exercise; not only assembling a crack mercenary squad under Albert Biermann (formerly of BMW's rather more illustrious M division) but also rather going to town on what is - let's face it - a drearily conventional front-drive hatchback.

As a result, the N does not merely use a lower and firmer variant of the i30's suspension: it sits on revised axles front and back, with completely recalibrated kinematics and the kind of costly adaptive dampers which aren't even an option on the cooking model. If you opt for the Performance version - which naturally we have - you get an electronically activated limited slip-diff, too, and 18-inch vented discs to go with Pirelli P-Zero rubber. 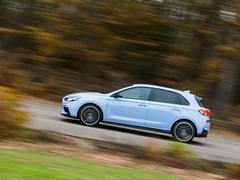 You also get 275hp (the standard, cheaper N comes with 250hp) which makes the car a ready-made rival for a number of front-drive, family-sized hot hatches - foremost among them the latest Seat Leon Cupra. This is useful for Hyundai, because Martorell's version of the Volkswagen Golf GTI comes with less heritage and badge appeal than its more famous sibling - attributes the N division can't hope to overcome at its first try.

Nevertheless, the Leon's immediate advantage over the N is obvious enough: the current Cupra is remarkably good-looking in a way that doesn't need the supplementary body tinsel obligated by the i30's staid appearance - and, to a lesser degree, it's nicer inside, too. Again, this has much to do with the stock blueprint each hot hatch has to work from: the Seat is simply better reconciled and slightly more stylish (possessing the superior infotainment system does it no harm either). However - and this is a significant however - the N does come fully loaded and the Leon does not (there are nearly £2,500 worth of extras on our test car not including the six-speed DSG that pushes the standard price beyond £30k). 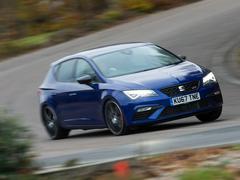 Seat's primary justification for the recent inflation of Cupra prices has much to do with engine output. With 300hp, the four-cylinder EA888 motor is essentially running in the old Golf R guise, providing the current model with a healthy advantage over both the i30N and even the front-drive Golf.

Twinned with the generally sleek shifting dual-clutch 'box, the benefit is obvious enough, too: the Cupra is express-grade brisk, especially in that burly mid-range way that makes a car feel mightily pleasing in the real-world. Inevitably there's some low ratio, front-axle scrabble to go with its extra potency, but it's rarely of the indecent sort. In fact, nothing the Leon does could be called indecent: it's as rounded as a squash ball and agreeably capable of accelerating like one.

Hyundai agrees that the N is almost half a second slower than its automatic rival to 62mph, although it's at middling revs (away from the obviously quicker upshifts) that the difference really plays out. The new division has worked wonders with its parent's run-of-the-mill 2.0-litre Theta petrol engine - but only so much is possible, and beneath the obviously heightened gruntiness that comes with a bigger turbocharger, there's still a stock unit not built to rev with much vigour. In isolation it's fine; being driven back to back against the EA888's fast-spinning thrust does it no favours, though - and there are times in the latter cogs when you sometimes notice how long you're waiting for the shift lights to ignite. 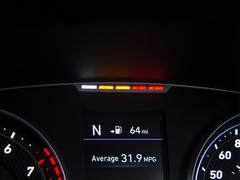 Fortunately, when they do go from amber to red, there's much to like about the gearbox. Stocky, sturdy and ultra positive, the lever moves through the gate with a pleasing and heavyset certainty - making it no smoother than the manual transmission standard to the Cupra, but certainly heftier. This robust level of control weighting is a prominent and unexpected theme: the electric powered steering too has been made unapologetically sinewy - meaning that the i30N is palpably less amenable around a car park than the Leon.

The real distinction, though, lies in the forthright character of the trick chassis. Where the engineers - or, even more feasibly, the executives who sign off the engineers' work - might have diplomatically opted for a tentative sort of hot hatch (i.e. one as inoffensive and as benign as the underlying i30) the firm has instead collectively taken hold of the 'proper' knob, and knowingly cranked it around to about an 8. 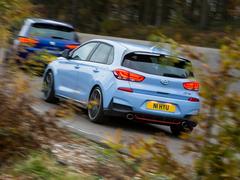 This nonconformist side - about as prevalent in Hyundai's lineup as a lit firecracker at church - is enormously welcome; not least because it provides the N with an instantaneous and trenchant identity. Where the Cupra toddles blamelessly about the place like a stock issue Leon, its rival - even with its adaptive dampers in 'normal' mode - makes a point of feeling magnetized to the ground in a way that makes it feel around two inches lower and ten times more purposeful.

Naturally there is a dynamic pay-off for all this single-mindedness: the N's obvious vertical stiffness occasionally degrading into the kind of downright abruptness that has your head incessantly nodding - but it doesn't take long to appreciate that while the wick may have been turned up, Hyundai has not wholly jettisoned its commitment to refinement. Stiffer it may very well be, but compared to the rather airy Leon, the car's running gear is as muffled as a diver's watch. 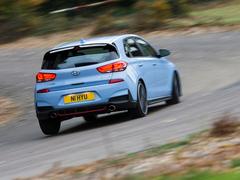 This makes the suspension's somewhat terse wheel control much easier to forgive; indeed, the N feels as though it's doing everything crisply - and all-of-a-piece. Rather splendidly, the latter quality extends to how it changes direction, too. No-one would suggest that the Leon doesn't corner keenly and capably - it evinces all the adhesiveness and accuracy we've come to expect from a hot hatch balanced on the laudably rigid MQB architecture - but there's still a perceptible amount of lean left in the handling; something Hyundai has seen to with gusto.

Where the Cupra starts to faintly toil under shifting weight, the much tauter N hunkers down into the kind of flat- and phat-bodied posture which has you attacking fast corners with genuine, suck-it-and-see relish. True - the steering response isn't quite up to the same level of feedback as the messages filtering up the seat backs (the Leon's rack attains weight much more convincingly) but it is easily astute enough to have you threading corners together with the kind of moreish enthusiasm that all well-sorted hot hatches tend to indulge. 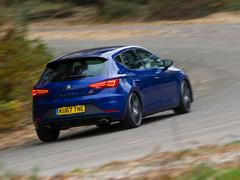 Bottom line? It's very easy to like. While there's often a nagging suspicion that the EA888 would have you charging away from apexes with greater verve, you're rarely as invested in proceedings as you are aboard the N. It cajoles you into an honest sort of enjoyment - and that's despite the faintly ridiculous number of drive mode permutations offered for each of its major components. (For the record, we tended to have the engine tweaked up, with the dampers and e-diff in their most relaxed setting.)

Certainly you'll want to avoid the N mode, that - on British roads - immediately curdles the fun with the kind of try-hard chassis tune that virtually forfeits decent road manners on standard 19-inch alloys. But keep the car in 'normal' (or single out the right option for each component) and the compromise seems neatly struck - not least for the nicely balanced, line-tightening way it comes unstuck when provoked.

The Leon is less interested in the possibilities afforded by lifting-off mid-corner - although its claim to superior all-rounder status is hard to refute. Undeniably it has the better, keener and quicker engine, finer looks and the sort of (adaptive) suspension setup which doesn't try your patience when you've inevitably flicked back into commuter mode. 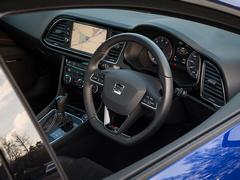 But where's the fun in that? Hyundai could've turned out a hot hatch very much like the Leon - and pointedly hasn't. Until now, the firm's unshakeable commitment to benchmarking (together with a fastidious approach to development) has produced a worthy but ultimately insipid-to-drive product lineup. Consequently, the N serves as a long-awaited vindication of the process; much of the accolade obviously going to Biermann and the people around him - but also to Hyundai directly for not foisting too much compromise on the result.

The car they have produced is quite unlike any other current Hyundai, and easily the best among them. It's better than the Cupra, too - not in every way perhaps and certainly not for every purpose - but better where it counts. If that's destined to be the N division way, the tuner is already halfway to the only reputation that matters.