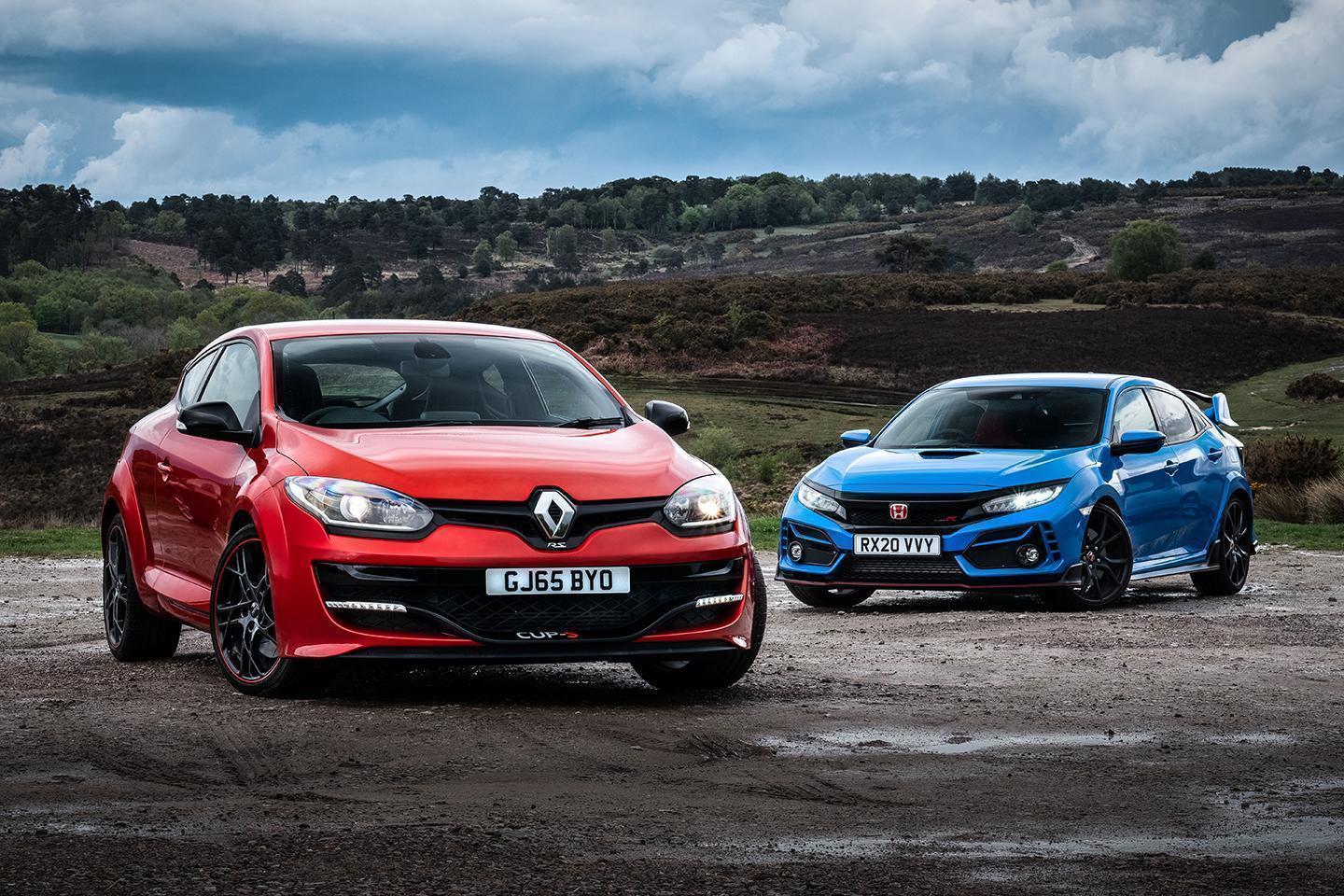 Despite being fairly different cars for sale years apart, there's a common thread running through the Renault Sport Megane 275 and Honda Civic Type R. Specifically, those who love them won't stop bleating on about just how good these odd-looking, front-wheel drive hatchbacks are. Just as it was pretty much from the Megane's launch in 2009, now it is with the Civic: in the eyes of testers, it can do no wrong, winning every comparison test at a canter and bringing joy to those jammy enough to secure a long-term loan. Owners are equally obsessed too, it would seem. Which probably gets a tad repetitive for everyone else, who tend to just buy Golfs regardless.

But we'll continue to bang the drum for cars like the Megane and Civic, because they prove that mainstream manufacturers can summon genuinely great driver's cars from workaday hatchbacks. Of course, Renault Sport has already changed tack somewhat, and is about to adopt a very different course altogether; Honda will surely have to follow suit in time. But right now, Honda sells brand-new one of the very best front-wheel drive cars ever, with perhaps the best manual gearboxes on sale, for comfortably less than £40k. In 2021, that's cause for celebration. At the same time, really good examples of Renault Sport's finest, like the car seen here (and which you might recognise as Ben Lowden's very own), are available for comfortably less than £20k. With almost five years having passed since a Megane like this one lined up against a turbo Type R, a rematch opportunity was obviously too good to pass up.

Honestly, it's so nice to see one of these Meganes up close again, to have the time to appreciate it rather than snatch a glance of Flame Red as it whooshes past in the opposite direction. Obviously, it's more muted against the Civic, the stance quite narrow and almost perched on its springs. Like the Clios of this era, however - and rather unlike the Civic, broadly speaking - it's the little details that mark the Megane out. The bulky arches to fit wider wheels and RevoKnuckles, the centre exit Akrapovic, the way the whole car points to the diamond on the front grille, informing how it will drive - it's all there, for those who want to look.

It's a similar story inside, where fripperies are eschewed for nailing the basics that only the dedicated few will appreciate. Maybe you're sat a bit high against the Civic, but the Recaro is a great seat, the wheel is pretty much spot on, and the dials are clear and the pedals perfectly placed. The interior encapsulates all that's great about the car; there's precious little fuss, in the grand scheme of things, with absolute focus instead on whatever will make it as great to drive as possible.

Which we'll get to in a second. Before then, it's worth reiterating - in case you hadn't heard - just how good this Civic Type R is. It flies in the face of all current convention - it's manual only, it looks how it looks and it doesn't have 15 suspension settings - yet it operates with total aplomb. The 320hp engine has turbocharged torque alongside a vibrant top end, the chassis is immensely grippy yet communicative, the brakes are firm but still progressive - you name a compelling hot hatch trait, chances are the Civic has it nailed. Even when conditions don't suit it, the car draws incredible traction and purchase from the surface, inspiring confidence and ensuring enormous speed. The way it melds usability with engagement is seldom seen at any price point or executed so well; the Type R can be driven like any other Civic with no fuss at all - or you could never use the rear seats and enormous boot and still have the best driving hot hatch around. You'd drive it to the Nurburgring tomorrow if possible, and enjoy every second. And before the affordability of the old Megane is mentioned, its £32,555 as tested price in 2016 is £36,280 in today's money - the Civic currently starts at £36,320...

That said, not even a car of the Honda's calibre threatens to overawe the Megane experience. Despite the fact this car is now five years old and apparently in need of an Ohlins rebuild. Nor can the weather. Because truly great cars remain so indefinitely, and will reveal something of that quality whether you have five minutes or five years behind the wheel - the Megane remains unequivocally brilliant.

You need make no allowances or concessions for the Megane's age; the car is so finely honed that even after so many years away it takes no time to get familiar. Where the current R.S. 300 has a tendency to baffle its driver with 4Control steering, here the wheel and front axle response are immediate, fast yet completely faithful and sufficient to make even the Civic look a tad soft. The delay in the Honda's throttle has gone, too, replaced with an accelerator pedal of millimetric precision. And if the brakes aren't quite a match, then they're still brimming with feel.

As always with Renault Sport cars, it's the chassis' star that shines brightest. Where the Civic would rather you drive to its style, the Megane is apparently endlessly malleable and accommodating, with the immediacy and tenacity of its LSD-equipped front end dictating it all. It can do fast, poised and accurate as well as any other, though it can also play at a more traditional hot hatch cornering approach, simply manipulated by throttle and brake. Like an old 911, the Megane's dynamic repertoire is sufficiently broad to keep its owner engrossed and entertained for a very long time indeed. It's a trick that hasn't yet been replicated, either, the Civic far more about outright grip and composure than a multi-faceted, immersive approach. If time has been kind to the Honda thanks to sympathetic model year updates, it's been equally favourable - if not more so - to the Megane. Sure, they really don't make them like they used to; but here's a hot hatch with a flavour of the old school alongside contemporary performance, equipment and manners. No wonder Ben had to buy another one.

For the sake of the narrative, it would have been nice to say the Megane's relative lack of popularity in period was a mystery - but we all know that isn't true. With dorky looks, no automatic option and three doors only, Renault Sport's laudable commitment to the purist was always likely to hobble its attractiveness to the broader buying public. That's before considering the ride; perhaps trying Ben's car on timeworn Ohlins was unfair, but there isn't any denying the Civic is markedly comfier on a pockmarked road - and no less capable in outright terms.

The Megane's appeal was narrow, then, but laser guided in its accuracy. The Renault Sport models tapped into exactly what a small bunch of hardcore enthusiasts - and motoring journalists - wanted from their hot hatches, and that continues to this day. Which is probably why they were all so upset when it was replaced; this isn't an experience that can be repeated anywhere else, no hot hatch that's better combined all the attributes that make a fantastic driver's car.

Which isn't to say the Civic doesn't have its advantages. Despite that soft initial throttle response, the powertrain is more exciting, revving out with greater vigour than the Megane's 2.0-litre turbo and matched to an exemplary six-speed manual. There's no doubt, either, that most (if not all) drivers would be faster in the Honda than the Renault on any road or track, in a far more accommodating car for the journey home as well. It's a mighty achievement, the FK8 Civic Type R, especially with this facelift, one that will eventually assume its place in the hot hatch hall of fame once people have gotten over the fact it doesn't look like an Audi S3. It is certainly an icon of this decade, and deserves all the praise that has been (and will continue to be) heaped upon it.

On the other hand, that an old Megane worth less than half as much can deliver an equally vivid and absorbing drive serves to highlight just what a special car it is, come rain or shine, road or circuit. If any doubt lingered, if there was any residual suspicion that we looked back on the Megane too fondly, a comparison with the current class best has reasserted its copper-bottomed claim to greatness. Ben's one isn't for sale (not yet, anyway), but plenty more are - and it's hard to think of many better ways to spend the money.