Two very different, yet very entertaining, ways of spending around £100,000 - which is better? 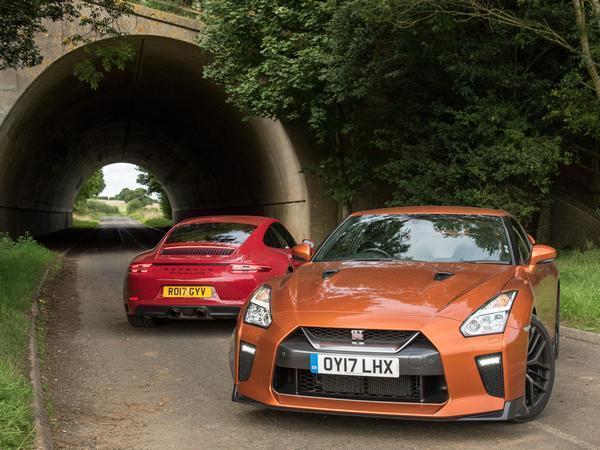 Should you be in the fortunate position to have £100,000 to spend on a sports car in 2017, the choice is surprisingly - yet encouragingly - varied. Beyond the two cars here there are F-Types, AMG GTs, Lotus Evoras, Aston V8s and Maserati GTs to choose from. A remarkable breadth of options given the price bracket.

So why these two? Well the GT-R is a vehicle we've only experienced very briefly in the latest MY17 spec, a facelift that promises to fulfil the 'GT' part of that iconic badge with a "new sense of elegance and civility." And there remains no better benchmark for an everyday sports car, in our opinion, than that Porsche with the engine in the wrong place. 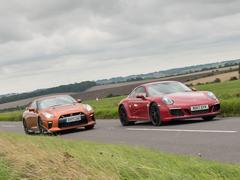 Different, yes, but with similarities too...

There's more to this comparison than simply another 911 vs. GT-R story though, as these two particular cars each feature an intriguing mix of classic and contemporary sports car traits. It will therefore be fascinating to see which incorporates them best.

Examples? The Porsche is a manual, yet has more ratios than the dual-clutch Nissan. The GT-R is an old-school turbo installation - embracing the lag and using both blowers to generate big power, lots of whistles, and ferocious on-boost performance. The 911 uses forced induction as part of a downsizing push, its two turbos solely aiming to improve economy, with everything possible done to hide their presence. The GT-R has hydraulic steering; the GTS has electric. The big Nissan is supposed to be the tech-fest, but don't forget the Porsche has four-wheel steer, adaptive dampers, rev-matching and variable steering weight. Which is the best mix?

Same difference
Our day begins on the M4, the location of many an early-morning test trundle, sat behind the lovely Alcantara wheel of the Porsche on the way to Membury services. It won't surprise you to hear the 911 is fantastic at the ordinary stuff - it does more than 30mpg on the motorway, it's impeccably refined and CarPlay is really well integrated. It's a cinch, quite frankly, and a very relaxing start to the day. But that's been the case with every 991; where they've struggled - and where in particular the PDK C4 GTS didn't deliver - was in being exciting. 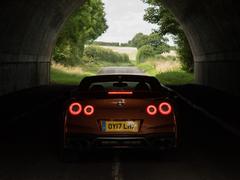 Facelifted, yes, but you'll recognise it

While pondering whether this car can be that, any semblance of peace or calm is shattered by a Katsura Orange thug steaming up behind with its unmistakable visage in view. Nik's here then. As is the Nissan.

Time may have softened the severity of the GT-R's presence to some extent - and this facelift aims to do that even further - but there's little that can touch an R35 for aggression and intent. It looks like nothing else on the road, and even painted magnolia and styled like a Figaro its sheer size would guarantee attention.

Read the manual? Use it!
Fuelled up and on the road I stay in the 911. What a joy it is to have a manual gearbox in a 450hp sports car; it may seem old fashioned to some, but when it's as good as this a manual improves the experience markedly. The seven-speed has come on leaps and bounds since its introduction half a dozen years ago, to the point where it now stands comparison with Porsche's six-speed as used in the 718 cars. It's precise, short of travel and beautifully weighted; the ratios are shorter than in the four-cylinder cars - a D-Type probably has shorter ones too - which means there's slightly more scope for exploring each gear. 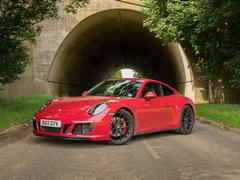 It's fun, too. Really fun. Ditching the PDK and four-wheel drive has saved 65kg from this GTS, while having just the two driven wheels has refreshed the dynamics. You're not suddenly fighting the pendulum and battling unwanted understeer, rather you have a car that gives the driver more of a challenge and therefore more of a reward.

Now the torque can challenge the available traction, the steering gives more back to the driver too, the car feeling all the more agile with that reduced weight. Where that PDK C4 would rather you just held on and admired it, this manual C2 demands more of your attention. And that's a good thing.

By the time we swap, I'm largely smitten by the Porsche - proof, if any were required, that the best 911s have two driven wheels and three pedals. The GT-R feels like a Nissan Maxima immediately after, the seating position high and the dash plastics shiny. While an improvement on previous R35s, the interior still cannot challenge the 911's.

PlayStation generation
Does it matter though? Run through the first three gears - if you dare - and the GT-R's interior will seem about as important as your next dental appointment. There's more inertia to the Nissan's 3.8-litre V6 than the Porsche's flat-six 3.0-litre, yet after all this time there's little to match the brutal, hilarious, insatiable acceleration of a GT-R. 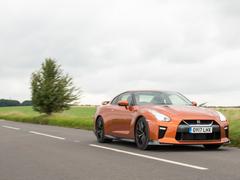 It's so, so much more than that though. People will continue to dismiss the Nissan as one-dimensional, lacking the depth, challenge, or intrigue of a 'proper' sports car. They - you know who you are - will say it's like driving a computer game but, frankly, that's absolute tosh.

This is an immersive, thrilling, demanding car to drive fast, the appeal and relevance of which arguably grows with each passing year. The Porsche's EPAS is good, but the Nissan's hydraulic system is fantastic; light off-centre but weighting up with load, it gives the driver great confidence from the off in directing this huge car. The brake pedal is perhaps a bit longer than you'd like, though the brakes themselves are reassuringly powerful and very easy to modulate.

There's just so much happening when you really get going in a GT-R. The steering picks up cambers, the diffs clonk and the speed just will not subside. Corners are a fascinating challenge, one that you must keep working at. Brake hard and turn in (understeer doesn't happen on the road; if it does then you're crashing soon after). Feel the load of the tyres through the wheel and get on the throttle again early, anticipating the lag. Get it wrong one way and you'll trundle out of the corner, boost not arriving until the straight and the whole experience a little underwhelming. Get it wrong the other and you'll get a spike of oversteer, which is quite frankly a little scary. Get it right though and the GT-R will slingshot away, boost having arrived at the right time and four-wheel drive delivering just enough torque back to unwind the steering for you. The wheel is straight, the car is doing the last bit of steering on the throttle, and it feels absolutely fantastic. 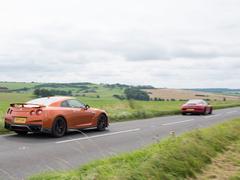 Won't stay behind for long, if you try...

There's more to enjoy as well - the GT-R's Bilstein Damptronic dampers may sound like an incontinence aid but they deliver fabulous control, this latest revision also allowing the mid-way setting to be used on a B-road where you previously went straight to Comfort. The seats are high, but tremendously comfortable, and the novelty of something so large being so agile will not wear off.

The Nissan is familiar then, though arguably none the worse for it. If anything this is perhaps the most successful reimagining of the formula yet, the additional comfort seemingly not at the expense of that trademark GT-R intensity. It remains an experience like no other, and a fantastic driver's car.

Dial 911? Drive 911!
Thing is, so is the 911. In fact it's the best non-Motorsport 991 thus far. The new 3.0-litre turbo is a fantastic engine: punchy at low revs, sharp at high, and with a lovely flat-six gargle throughout. The final few revs perhaps aren't quite as worth savouring as in the 3.8, but for 95 per cent of customers this engine will be brilliant - the other five per cent will of course look at a pre-facelift 991 GTS. 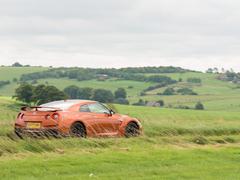 Thing is, as someone who would have previously counted themselves as one of the five per cent, the new car warrants serious consideration. It's not a trendy thing to say but, nice though both the N/A GTS 911s and Caymans were, their brilliance was only shown right at the limit. Wide rubber, great inherent traction and limited torque meant at ordinary speeds they felt a bit overtyred. And a bit distant, actually. While the turbochargers have not made 305-section P Zeros into spacesavers, the limits feel a bit more easily accessible. Put simply, a GTS with turbos feels more alive, more adjustable and more exciting dynamically than one without. Is that worth trading the old engine for? Possibly.

The GT-R's not done yet though. Regardless of its new softly-softly facelift, this is still a fierce, angry car, one that thrills and intimidates in equal measure. It's still quicker than the 911 everywhere, and that would remain true on track. You could cover ground very rapidly and not feel challenged, but the GT-R is always willing to raise its game if you are. If you've not driven one you really must, because this remains an extraordinary car even after so long.

It feels a familiar GT-R experience though, with familiar GT-R gripes. You would be disappointed if you'd spent £90K on a car and the plastic under the steering column was loose, right? It's deeply endearing, the GT-R, but even in this guise it's hard to call well-rounded. 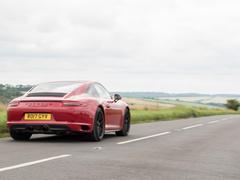 Best sports car here, and one of the best around

The 911, on the other hand, is the best regular production 991 yet. The improvements are modest, but this car finally seems to have fulfilled the potential that's been there since 2011. It's as usable and accommodating as any other model in the range, only now with some traditional excitement and reward in the mix as well. No longer does a complete sports car means a cold sports car, this 911 is as involving, as immediate and intoxicating as you would hope from a Porsche with a GTS badge on its bum. The GT-R still has the ability to thrill like nothing else, and still looks very good value, but the 911 - in this specification - is the best sports car here. Take off a few of the frivolous options and it could well be the best sports car at £100,000, in fact.