The route to Zenos: My Dream Drive

How better to start a Sunday morning than with a terrific B-road to a Sunday Service?

B1077, Ipswich to Wymondham 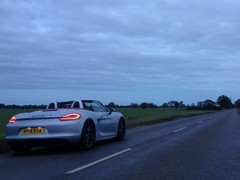 See, there is an upside to the east being flat

"This route is a fairly simple one as, apart from a small diversion at Diss, it follows one route all the way up through Suffolk and Norfolk. The B1077 begins in Ipswich but I picked it up at Westerfield. From there it follows up through Debenham, Aspall, Eye, Buckenham and Attleborough until you hit the A11 and follow that into Zenos. It would surely be a great route for a Sunday Service based at a nearby sports car manufacturer too...

"When the B1077 reaches Diss you need to follow the A1066 for a few hundred metres. It's effectively the main route through and you'll soon see a sign to the right heading back to the B-road. It will be directing you toward Shelfanger, which is the next village along. And that really is it. Ipswich to Wymondham on pretty much one road and superb fun the whole way. It's ace!" 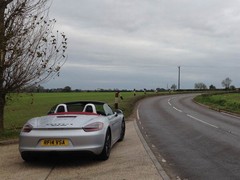 And it didn't even rain!

Why it's a dream drive:

, it's another example of a great rural B-road. There are sections with high hedgerows that feel quite narrow and place an emphasis on precise driving and then faster, more open parts as the fields are exposed. A fun road offers different challenges, right? There aren't too many settlements along the route either meaning you can establish a good flow most of the time, not always feeling like you're stopping and starting along a decent road. It's certainly not Wales but it's good enough.

"Furthermore, the B1077 runs along a similar route to the A140 from Ipswich to Norwich. The A-road should of course get you there faster (not always guaranteed with the A140!) but that does mean the B-road is even more sparsely used. If you want to get somewhere you would use the A140 whereas the B1077 appears to just connect the villages. And make for a dream drive. Driving at 7am on a Sunday probably helps with traffic too!" 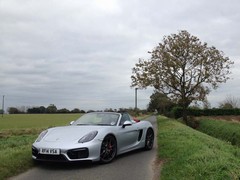 "Coming from Ipswich, you know the route has started with the long straight out of Ashbocking. The first few miles are quite narrow and populated but don't lose faith; leaving Ashbocking is fairly clear and then the dream drive begins.

"There's a great section around Quidenham as well, quite fast and especially well-sighted compared to the rest of the route. Many of course complain that the east is too flat but it makes picking out sight lines far easier. Add in a couple of tight bends it's a real highlight.

"The best part of this route though is about half way through between Occold to Debenham (it seemed to be most enjoyable this way but it's still excellent in the other direction). It put me in mind of Scotland actually, with parts of it relatively wide and then immediately followed by twistier section with railings to stop you falling off. With a couple of braking zone bumps it's a really rewarding and challenging few miles of road.

"Downsides? Whenever the B1077 does get anywhere near the A140 it become less enjoyable. Crossing it is usually a pain and of course industry is more likely to be based near the major road. So keep an eye out for 40mph speed limits and traffic at industrial units. Yep, even on a Sunday! With this being such a rural dream drive as well there are the usual warnings to heed. Mud can be on the road quite frequently, animals can pop out of anywhere and there are always tractors to be wary of. Finally, don't forget if you are in a convertible that the countryside can smell a bit too; you have been warned!" 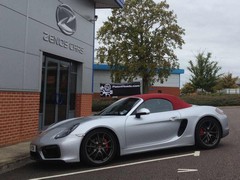 Great roads and a good destination as well!

"Though it seems an awfully long way off now, there's an excellent car show at Helmingham Hall in August. If old houses and gardens are your thing it's probably quite a nice place to visit at other points during the year too.

"This wouldn't be a rural dream drive without mention of a country pub or two either. Obviously I was driving but I can point you in the direction of places that looked very nice. The Gamekeeper in Buckenham is located on East Anglia's largest village green (woo!) and is a 17th century Grade II listed pub (that's more interesting). The Mulberry Tree in Attleborough also looked like one of those places where you could happily spend a whole Sunday afternoon if you wanted. And yes, Aspall is indeed where the cider is made!

"Or you could do what I did and go into Norwich from Wymondham and stuff your face with waffles at The Waffle House. The chocolate mousse comes highly recommended. There's a joke in here about excessive talking on trivial matters... Anyway, the B1077 is a great road. Go and drive it. And if it's on the way to a Sunday Service then even better!"