Yes, the new V7 III does look identical to the outgoing V7 II model. And to be fair, it also looks pretty darn similar to the first V7 Guzzi ever produced way back in 1967, but that's what you get with retro styling. In terms of overall look, once a firm decides on a retro image it tends to stick with it because, by its very nature, retro doesn't date. But under the old-school façade is a heavily updated V7 that has been absolutely transformed in terms of ride and performance. 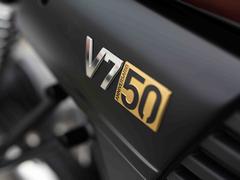 50 years later and they've cracked it!

As the name says, this is Guzzi's third incarnation of its modern V7 model. First re-released in 2008, the V7 was updated in 2014 with traction control and ABS as well as a few other mods to become the V7 II, a bike that has proven extremely popular thanks to its blend of classic looks and relaxed spirit. So what's new for this year? As it transpires, considerably more than meets the eye.

The V7 III has a revised chassis with sharper geometry for more agility as well as new dampers. The riding position has been tweaked to make it more comfortable, the seat's design changed and the overall look subtly altered with even a locking fuel cap added. Now that's change! However, the most significant updates happen within the classic transverse V-twin.

With the threat of Euro4 hanging over the air-cooled motor's head, Guzzi have made a big effort to clean up its emissions and noise. As with the V9 models that PH2 tested last year, the V7 now has a new head with improved cooling ducts (it is effectively a V9 head) while internally the gearbox has been updated, the clutch's action lightened and the power boosted by 10 per cent - on a bike that only makes 53hp, that's a very significant gain.

And you know what? These updates have made what was a good but slightly frustrating retro into a really fantastic machine, especially in the chrome Anniversario paint scheme I rode. If you can call chrome a paint scheme... 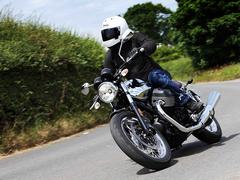 Far more than meets the eye

It's hard to overemphasise just how much better the V7 III is when compared to the V7 II. The old bike was charming enough in its styling, but it was typical Guzzi - as well as looking old, it felt dated to ride. Looking old is all very well and good on a retro, but when you are faced with terrible suspension and a gearbox that feels like it was designed by Farmer Giles it's not a winning combination. Well, for 2017 all this has been banished.

As well as delivering all the spirit you want from a Guzzi through an engine that lurches to the side thanks to its torque reaction and sounds beautiful and thumping, the V7 III is so much more refined to ride. When you engage a gear it snicks home with the faintest of clunks and the clutch action is feather-light. The throttle response is beautifully fluid and smooth and when you are on the go the V-twin engine is a joy. At low revs it still has a wonderfully pleasing raw feel about it, which is exactly what you want, but up the pace and in the higher revs it smoothes out so that you left with a motor that feels plush and vibration-free. For me this is an ideal combination as you get all the fun of an air-cooled motor that feels like it has some heritage when you want it at slow speed, but a thoroughly modern ride when you are cruising at 60mph-plus. With just 53hp it's not the fastest out there, but that has never bothered V7 II owners in the past and it has bags more character than Triumph's small capacity parallel twin. Moreover, it boasts the safety nets of ABS and traction control, not that you really need the latter. As good as the new motor is though, the real star of the show is the updated chassis.

I didn't expect the updated Guzzi to handle particularly well as to be truthful most Guzzis are fairly horrible in bends. But the V7 III once again surprised. The updates to the chassis have taken the pogo-effect out of the dampers' performance and delivered a bike that can really be enjoyed in the bends while also delivering a pleasant cruising experience. OK, the ground clearance is still limited, but for gentle back road rides the Guzzi is spot on and I thoroughly enjoyed my sunny ride on it. And that's what the V7 III is all about - getting out and about and enjoying the experience of two wheels at a fairly sedate pace. 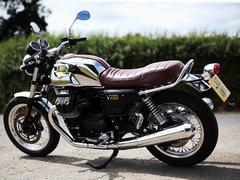 Ok, the Anniversario with all its chrome may be a bit blingy for some, but as only 750 units are being made worldwide it will be quite a rarity. If you want something a bit subtler the Special comes in a few classy paint schemes while the more budget Stone version is the same bike but with less chrome and cast, not spoke, wheels.

Whichever model you plump for you won't be disappointed because as relaxed retros go, the V7 III finally hits the mark. It's only taken Guzzi 50 years to get it right...