SVO sets its mind to a Project car, with suitably spectacular results... 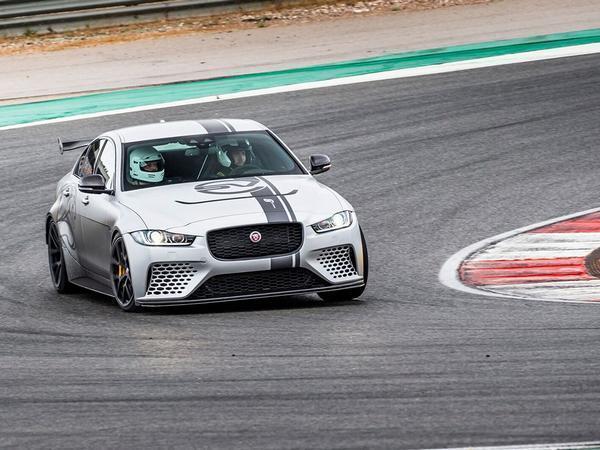 You would need to be uncomfortably familiar with the front end of Jaguar's smallest saloon car to realise it, but the XE SV Project 8's headlights aren't where they ought to be. In fact, compared to an everyday XE, the Project 8's feline peepers are 14mm further forward. As is all of the bodywork that surrounds them.

That was one the measures Jaguar's Special Vehicle Operations department had to take just to stop the 20-inch Michelin Pilot Sport Cup 2 tyres from fouling the backs of the two light units. According to vehicle dynamics engineer David Pook, if he and his team hadn't been able to make the rubber fit within the wheel arch, the Project 8 would have been killed off then and there. No other tyre, says Pook, would have been up to the job.

Ordinarily, that's the sort of complication a car manufacturer would give two or three minutes' consideration to before canning the project for good. Performing reconstructive facial surgery on a production car - even a very low volume one - just so a certain type of tyre can be used demonstrates an extraordinary level of determination. But that stubborn single-mindedness didn't merely get the Project 8 through to production; it also made it unbelievably good fun to drive.

Special Vehicle Operations, or SVO for short, is the part of Jaguar Land Rover where the overgrown children work. It's responsible for high performance SVR versions of Range Rovers and F-types, as well as the more unusual, low-volume models, such as the F-type Project 7 from four years ago. If some of those earlier SVO projects could be criticised for being a little too conservative, the same absolutely cannot be said about this one. Pook says he and his colleagues basically set out to build a car they all really wanted to drive, and I can think of no better reason for a motor vehicle to exist than that.

It'll be limited to just 300 units worldwide, with between 60 and 80 expected to stay here in the UK. All 300 cars will be left-hand drive because the Project 8's engine - the familiar 5-litre supercharged V8 that you'll find in various Range Rovers and very quick Jaguars - couldn't be made to fit inside a right-hand drive body. The cost of the car is £149,995, which means it's comfortably the world's most expensive super saloon, as well as the fastest (Jaguar has the Nurburgring lap time to back that last bit up).

The Project 8 has been so comprehensively reengineered that it's pretty close to being a new car altogether. The body-in-white is shared with the base model, but almost every body panel is new. On top of that the suspension has been completely reworked, the carbon ceramic brakes are unique to the Project 8 - the 400mm discs on the front axle look like dustbin lids - the aero package is bespoke and, well, just about everything else has either been upgraded or redesigned.

Rated at 600hp and 516lb ft of torque, the V8 is in a higher state of tune here than in any other JLR product. In fact, the Project 8 is Jaguar's most powerful road car ever. Driving through an intelligent four-wheel drive system and an eight-speed automatic transmission the motor thumps the Project 8 along to a 200mph top speed, registering 62mph just 3.7 seconds after it sets off.

Before I'm let loose on the tumbling curves of Portimao circuit in the most potent Jaguar ever, I'm ushered towards a second Project 8 that's been set aside for road driving. Despite the soggy weather, some gnarly Portuguese back roads, and springs that are four and a half times stiffer than those fitted to any other XE, the Project 8 somehow works.

Aggressive Michelin tyres and absurdly stiff springs should make it unbearable on anything other than a smooth, dry road, but it's actually very drivable. The damping is so well resolved that a firm ride never becomes ruinous, while those Cup 2 tyres actually find stable and consistent grip even on a wet surface. Traction is very good, too, thanks to the four-wheel drive system and the engine's linear torque delivery.

And on track? Well, it's just off-the-scale good. The Verbier Silver car that I drove at Portimao - by then bathed in early summer sunshine, the track surface bone dry - was fitted with the optional Track Pack, which costs £10,000. It ditches the rear seats in favour of a half roll cage and replaces the front seats with fixed-back carbon items. Kitted out like that the Project 8 feels more like a racing car than I ever thought a road legal saloon possibly could.

The Project 8 sort of has two track modes. You can manually lower the ride height by 15mm - a wheel-off job - and fully extend the rear wing and front splitter, and you can also switch into the track driving mode using the buttons beside the gear lever, which knocks the dampers into a stiffer setting and diverts more of the torque to the rear axle more of the time.

With both track modes engaged the Project 8 is addictive on circuit. There is almost no body roll; just flat, inertia-free responses. Grip levels are enormous, the brakes simply refuse to overheat and the steering is pinpoint accurate. The four-wheel drive system, meanwhile, is astonishingly effective. Most of the time it only powers the rear axle, so when you turn into a corner you'll swear you're driving a two-wheel drive car. It's only when you get on the power in the second half of the bend that it sends up to 50 per cent of the available torque forwards. What that means in practice is that the car just doesn't oversteer. Instead, the Project 8 simply launches off down the next straight as though it's been kicked up the jacksie by the Almighty himself.

The gearbox is probably the weakest link. It does its job well enough, but without distinction. The engine, however, is a delight; gloriously old-fashioned and with a furious soundtrack, like a hundred thunderstorms happening at once.

Yep, it really is quite a car, the Project 8. Jaguar deserves a lot of credit for having the nerve to follow through with it. Having said that... It is a shame, is it not, that Jaguar builds a high performance, V8-powered XE, but it does so in the form of a very limited edition car that costs £150,000, rather than a series production model that costs half as much?