GTI 30th becomes by Peugeot Sport; is it the same terrific hot hatch in the UK?

Time moves fast in the supermini hot hatch world. In December 2014, the

was described on these pages as a "genuinely superb little hot hatch". Since then it has not only become the series production 'by Peugeot Sport' car, but there's also been the introduction of a

and, of course, the

. Get used to hearing that F-word, because it will come up pretty frequently. The question here is simple though: is the fastest 208 GTI as entertaining on the road as it was slithering around a Parisian test track? 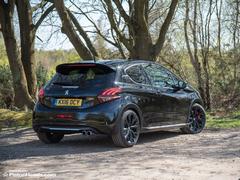 The 208 gets off to a very good start by just being painted one colour. In fact, all one colour, the wheels colour coded to the black paint. Not only does it arguably have the best styling in the sector - the Fiesta looks awkwardly tall by comparison, the Clio overdone and the SEAT a bit plain - there are a few clues pointing to what lies in store for the drive too. There's some really aggressive negative camber on the front, the top of the 18-inch wheels pointing in noticeably more than the bottom. The brakes behind those wheels look suitably large too, even if the rears look a little meek by comparison. The stance is screaming "drive me!" before the door is opened.

In the main it's a very good interior, certainly of a higher quality than the Ford and more stylish than the SEAT's. The touchscreen can prove irritatingly sluggish at times but that's about the biggest gripe. Moreover, Peugeot's feature of using a small wheel makes more sense in the 208 than the larger 308; you can even see most of the dials here... 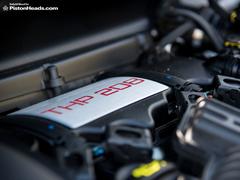 There's a refreshing simplicity to operating the GTI also. It starts on a key, the traction control is on or it's off and the car drives just one way; there are no steering weights to cycle through or damper settings to adjust. You may not think that's an especially valid concern to supermini hot hatches, but remember that the Ibiza has adaptive dampers and the Mini its 'maximum go-kart feel' setting. Here's proof they aren't really needed.

While the photos here were taken close to the office, we did venture across to Wales for an afternoon in an attempt of a proper road test. As you might have been able to guess, most of the Severn seemed to fall on our test route and there was no chance of getting any usable photos. Still, what better real world test than a wet and bumpy Wales? 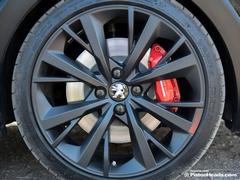 The Peugeot Sport GTI is tremendous, in a word. Even allowing for some flaws, it's a pleasant reminder that Peugeot hasn't forgotten how to build a great hot hatch. It's eager, rapid, effervescent, tenacious, exciting and, above all else, jolly good fun. All those traits we thought had gone missing from the small hot hatch are present and correct in this little Peugeot.

New dog, old tricks
The steering is quick and, combined with that camber, means that turn is super sharp; but because the whole car is so agile and alive, it's never unsettling. Body control is very good, if lacking the final layer of finesse found in something like a Megane Renaultsport. But a level of feistiness suits a smaller hatch, and it's only over successive harsh bumps that the Peugeot struggles slightly. 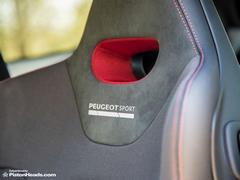 A standard limited-slip diff gives the 208 another dimension to its handling, plus an advantage over the Fiesta. In the rain it's a real asset, dragging the car from corners and just slightly tugging at the wheel to let you know it's working hard. As far as we could discover it will allow brake and throttle to be overlapped as well, so the car can be held with your left foot on the brake and then driven out hard with the diff helping.

That it's taken this long to mention the powertrain should hopefully suggest it's not the star of the show here. On the road it certainly has a nice, usable level of performance (unlike in the more senior hot hatches that are so fast you're frequently lifting), but doesn't want to rev as willingly as the ostensibly similar unit in the RCZ R. It was pretty boomy at high revs too. The Peugeot's case is at least helped by the fact that none of its rivals have especially brilliant engines. The gearbox throw still feels rather too long and vague though, even when sitting on the right. 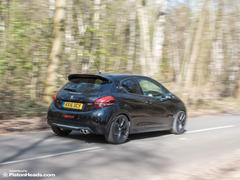 Given the driving rain and fairly narrow roads, you'll hopefully excuse the omission of any claims to on-limit performance. What there's always an impression of though is that lively and exciting car tested in France. Even when the direction of travel isn't out through the side window, the GTI is keen and, overused though the term is, adjustable. Misjudge how much the diff will tighten the line and a small lift will do it for you, without threatening anything more. Stop hard into a bend with the fantastically strong brakes and it relishes the weight remaining on the front, keeping the nose right where you've aimed it.

Then when your all-too-brief drive in Wales has finished, it will trudge back along the M4 with probably more refinement than the Ford. An Ibiza would be better still, but then you aren't likely to have gone to Wales with that... While the seats are very good in the Peugeot, the driving position is a little peculiar. The pedals seem too close and the wheel too far away, without sufficient adjustment. It's not as uncomfortable as it sounds, but certainly worth trying out. 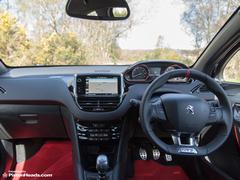 It's a minor blot on the Peugeot's record though, the final verdict overwhelmingly positive. So it's the supermini hot hatch to buy? In most cases, yes. Put simply, the Peugeot feels like it's worth every pound of the money being asked for it. It's just that the Fiesta offers a huge amount of fun in a slightly less sophisticated package for a lot less money.

If a deal comes up on an ST that's markedly more affordable than the Peugeot Sport GTI, then get it; it's brilliant, and the Peugeot is not £4,000 better. However, if for example a 208 is available at less than £19K with just 250 miles, it's worth the premium over the Ford. Make sense? Either way, you'll have a cracking hot hatch. More encouragingly, this 208 really is as good as that first track test suggested. For the first time in a while, enthusiasts should eagerly anticipate what Peugeot Sport can conjure up next.