The Azores: My Dream Drive

PH heads to the Hawaii of the Atlantic

The route:
The journey is a single solid six-hour drive, making a figure of eight across the largest of the Azorean islands - although it could easily be broken up into separate legs and then spread across a number of days. 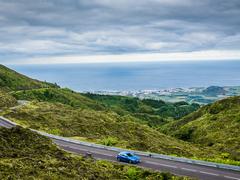 Starting from Ponte Delgada, follow the EN1-1A as it snakes along the edge of the island. Leaving the picturesque town behind you, take a right onto the EN9-1A which steadily becomes a series of hairpins in the usual European vogue - albeit with rows of towering ferns lining the road. Once out of the foliage, you'll realise just how high you've climbed. In fact you'll have ascended Lagoa Azul; a stunning volcanic crater with a pair of equally breathtaking lakes, one blue and one green. The road descends past the water becoming easier as you go and taking in the kind of villages which appear cut and pasted from postcard covers.

Having returned to the EN1-1A on the north side of the island, you'll need to take the ER3-1 - another challenging section of hairpins which takes past black sand beaches along the south coast. There's no foliage to spoil the view this time, and the lunch stop takes in the spectacle of the hot springs at Furnas.

After lunch, head towards Nordeste on the EN1-1A again. The road will return quickly to type: corner after glorious corner, all the while encompassing a 1000m elevation change. To complete the loop, you'll need to cut back inland down the M521 towards Furnas, eventually arriving back to the starting point of Ponte Delgada. 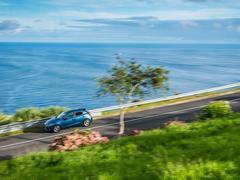 Why it's a dream drive

Despite the multitude of hairpins, no part of this 250km journey feels the same as what's gone before. The stunning white buildings and narrow cobbled streets of Ponte Delgada evoke the Med, but once up in the hills the road becomes a dead ringer for the most spectacular of alpine passes. And then when you've become accustomed to the Alps, you arrive at the crater at Lagoa Azul and you're suddenly transported to Hawaii; complete with its volcanic black sand beaches. Best of all, the roads are quiet (bar the odd tractor) and are generally of good condition - albeit speckled with the odd cobbled section.

Highlights and lowlights:
I suspected the Mazda2 GT might be a lowlight, it not being particularly PH-y or even objectively brisk. But as is often the way with small island roads, the super mini seemed scaled perfectly to fit and (thanks to the manufacturer's continued devotion to natural aspiration) took to being repeatedly revved to 7000rpm in second and third gear on twisty roads like a gull to a cliff face.

The section of road from Furnas to Nordeste was a particular highlight, going from sea level up to about 1,000m and back down again with every other turn being a chassis-testing hairpin.

The only word of warning relates to the driving habits of the locals, who are wont to pull over at any point without indication. Lane discipline isn't at German autobahn standard either so be prepared for a few evasive manoeuvres on the twistier sections. 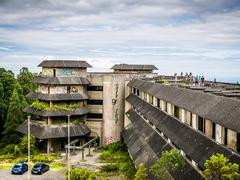 Ponta Delgada is a great place to begin, being close to the airport as well as the largest town on the island. Heading west toward Mosteiros and Sete Citades caldera, there is an abandoned hotel called Miradouro da Vista do Rei. Only open for a year in the late 80s before it was abandoned, it is definitely worth exploring; even if only for the view from the roof of the island's two famous lakes.

As mentioned, the lunch stop in Furnas boasts thermal springs - in which you can choose to have your corn on the cob cooked - and nearer the end of the route, it's certainly worth stopping at one of the only two tea plantations in Europe.