Yes, a ride in the passenger seat but Harris gets some real insight into AMG's A-Class

Curiosity undermines even the most determined attempts to take the moral high ground in this shady car business. There I am openly laughing at people sitting in the passenger seats of soon to be released cars and, sure enough, I immediately do just that in the 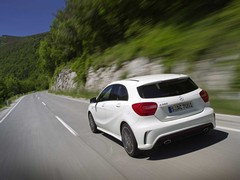 Aesthetically the A45 won't differ from A250 Sport

Why? Because this past month has been completely hot hatch dominated for me (Megane, Focus and Astra coming soon), and like any bloke in the grip of his current fad, I currently have a limitless appetite for anything related to the subject. We were at Hockenheim to drive the

(video to follow in coming weeks) and Tobias Moers, head of product development at AMG, was giving a few taxi rides in a disguised test car. It seemed rude not to jump in try it given recent exposure to the

First, the bad news. The A45's four-wheel drive system is by Haldex. Clearly Moers knows that anyone who enjoys driving sees this as a mechanical cold-flannel equivalent to picturing one's grandmother during the vinegar stroke, so he pins the A45 around the circuit and every time he lifts the throttle mid-corner, the front axle pulls into the turn, and the rear mobilises itself very nicely.

Me, grinning: "That doesn't feel like the Haldex systems I'm used to." 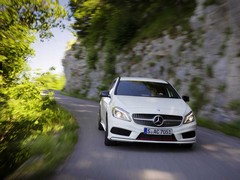 The Elk test era is a long way behind

Him, grinning: "We have made many changes so the car has balance. It has to be fun and I have to be able to play with the car's angle on the track or it's no good."

Now I have to take him at his word on this. Tobias got gratifyingly animated about the evils of very fast 4WD cars that just understeer everywhere and said AMG was not interested in doing the same thing. In fairness to AMG, it is not known for front tyre wear. All I can say for now is he lifted, the nose moved the right way and the tail moved the right way. Not concrete evidence of greatness, but good news at this stage.

The car is very fast, the double-clutch gearchange is crisp, even though there does seem to be quite a big gap between third and fourth gears. Handling is flat and grippy. Other than that I can't tell you any more - but Moers confirms that the steering is identical to that of an A250 Sport, which I thought was pretty good. 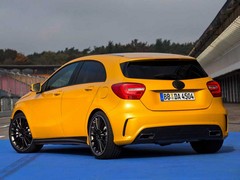 With 60 per cent of the mass up front, a base package designed to be front-wheel drive and a four-cylinder engine, this is completely new territory for AMG.

It's an interesting engineering exercise because AMG has separately developed the complete powertrain, a large task these days, and it looks like other Mercedes products might well benefit from this in the future. The dual-clutch gearbox is taken from the A-Class but completely re-engineered to deal with the extra torque. The motor is a 2.0-litre turbocharged four-cylinder that is completely new, even down to the sand-cast block. There are no confirmed figures right now, but talk is of 350hp and 332lb ft when the car goes on sale next summer. Yes, AMG has been looking rather closely at the Audi RS3.

Out on the road, the ride is firm, but not RS3 harsh, although Moers admits the car is probably firmer at very low-speed than he'd personally like, AMG's research suggests the target customer will live with that for the alert feeling it brings, conclusively proving that most people who agree to participate in surveys are berks. As is the way with these new turbo motors, it pulls from very low revs with little fuss and the shove is considerable. Exhaust noise is prominent, and on upshifts the fake ignition cut gives a massive BANG. This will almost certainly be calmed for production. 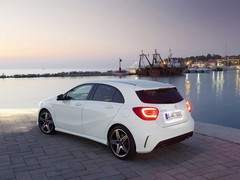 It's hard to judge the car as an object because it isn't finished yet. But I'd make two observations at this point. The first is that BMW has effectively blown this new market for very fast hatchbacks very wide open by pricing the

the way it has, so the A45 probably can't follow previous AMG models and sit well above the equivalent Audis and Bimmers because it just won't sell in the required volumes - partly due to the second thought. Styling.

There will be no body-in-white alterations for the A45 AMG, so it won't look that much tougher than an A250 Sport. Some people will love the subtlety, but as Audi has proved with the RS3, looks can carry you a long way in the market place, even if you drive with all the finesse of a dump-truck. Spending so much on the new powertrain and then not giving the A45 some funky new clothes might prove to be a costly mistake.

And so the German domination continues. The French used to own the fast-hatch territory, but BMW, Audi and now Mercedes have taken it, adjusted it to their tastes and are busy changing our perceptions of the way a compact car can perform.