Lynk & Co 03 is the fastest FWD and four-door at the Nordschleife, lapping in 7:20 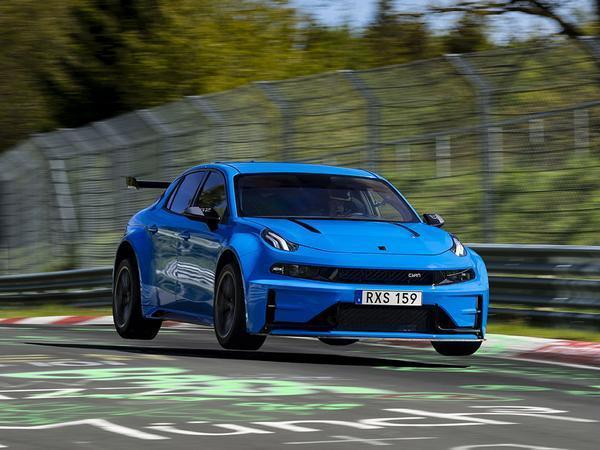 Remember the crazy Polestar concepts of a few years back? There was the 400hp C30 of 2010, followed up by the 2012 S60 Concept, with 508hp and a manual gearbox. Well, here's what that team is doing now: Polestar's motorsport people became Cyan Racing, Cyan Racing (as part of Geely) runs the Lynk & Co WTCR team, and the 03 Cyan Concept is the roadgoing version of its racer. It's also now a record-breaker, too, with a 7:20.143 lap time on the Nurburgring Nordschleife.

As always, there are some caveats. With the car very much still in development, it's hard to consider the 03 Cyan Concept a true production saloon in the same way that so many others can legitimately claim to be. In addition, this Lynk & Co has been pitched thus far very much as an adaptation of the touring car for the road, rather than a track day tool that's also suitable for the street. We don't know for certain yet, though it looks like being the kind of thing that'll make a GT3 RS feel like a Panamera hybrid.

Still, let's not take anything away from a remarkable achievement. For starters, this is a 528hp front-wheel drive car that actually works, which is something in itself. That it's then lapped perhaps the most challenging track on the planet three seconds faster than Jaguar Project 8 - the four-door car it has seized the record from - despite the FWD and less power is even more incredible still. That was on production tyres, too, the Michelin Pilot Sport Cup 2 favoured by so many circuit specials.

With a whole Renault Sport Clio's worth of extra power over the Megane Trophy R - the incumbent front-wheel drive champ on the Nurburgring - the Cyan Racing's second record is perhaps less laudable. Still, taking 20 seconds out is substantial.

Henrik Fries is Cyan's Automotive R&D boss - he said: "While our main purpose for the many laps on the Nurburgring Nordschleife is development, the records that we broke are a true testament to the potential and capabilities of the Lynk & Co platform, as well as our engineering philosophy from more than two decades of motorsport and road car performance."

As for the feasibility of the 03 Cyan Concept, the release for the lap time also mentions development for the car in Sweden this winter, "as part of creating a performance car for all roads, all seasons and all conditions." That would imply something for full production, if probably in limited numbers, and not merely the flight of fancy that previous Polestar vehicles represented. It's certainly progress we'll keep a keen eye on, which is not a sentiment ever previously expressed on PH about a four-cylinder, four-door, front-wheel drive Chinese saloon. Let's see what happens next...