How does Saab's first new car under Spyker ownership measure up? 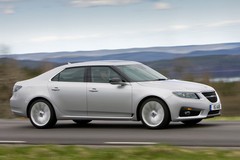 The products of Saab’s adoptive parent company Spyker might be more up PistonHeads’ Speed Matters-type street, but Saab’s own products have traditionally held the attention of plenty of petrolheads, too.

In recent times, GM’s ownership of Saab has rather diluted its appeal, with the brand becoming as associated with rehashed Vauxhall hardware as with quirky, original design. It is the new Saab 9-5’s job as the first new Saab to be launched post-GM to help redefine the firm’s brand image – and that’s no small ask.

But the weight on the 9-5’s shoulders is even more burdensome than it might be, because it must soldier on alongside the grey-haired 9-3 as the company’s only remotely new offering until the 9-4X crossover arrives (in the US) in spring next year. 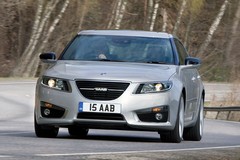 On top of that, the severance from GM has led to the decimation of virtually the entire US dealer network – so Spyker-Saab must effectively start from scratch in its most important market (although no doubt many long-serving Saab dealers will re-sign with the brand).

Saab's situation in Blighty isn't quite so painful - its dealer network has been able to carry on more or less intact while the company has changed ownership. Even so, sales are still pretty much on their knees. Despite the new 9-5 hitting showrooms on 8th July, the UK's 105 Saab dealers only managed to shift 356 new cars - including 9-3s. That's fewer than four cars per dealer in a month and represents just a quarter of a per cent of new registrations. Saab's new age hasn't got off to a flying start, it seems.

So is that the fault of the company's brand image or a lacklustre new product? The 9-5 certainly looks the part, with a glasshouse and tapering roofline that reminds you, if you squint, of the 1980s Saab 900. To these eyes at least, it's an elegant, interesting alternative to the conservative large exec norm. 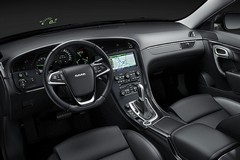 Inside, the executive car credentials fall apart somewhat. The swoopy dash is familiarly Saab, but there is too much black plastic and, yes, recognisably Vauxhall parts for a car that, in top-spec guise, is almost £38k.

Underneath, the 9-5 is based on a stretched version of the same platform that underpins the Vauxhall Insignia (remember that this car has been launched post-GM, but was developed during GM's tenure at Saab), although the two cars were developed concurrently, rather than Saab getting Vauxhall/Opel leftovers.

In top-spec guise it has to be said that the chassis works quite well. The H-pattern multilink rear suspension and clever 'HiPer Strut' MacPherson-esque front set-up combine with the longer wheelbase to make the big Saab feel composed and controlled through corners and over bumps. Meanwhile, the four-wheel drive helps to quell any torque steer that the 2.8-litre, 296bhp, 295lb ft twin-scroll turbo V6. 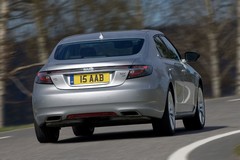 But that's the top-spec offering. Depending on how far down the range you have to go, 9-5s have to do without the HiPer Struts, the H-pattern rear suspension or the all-wheel drive. And that, perhaps, is the key. Without the top-end gew-gaws and gadgets, the new 9-5 is a distinctly average offering in a distinguished class.

Saab's New-era saviour? To paraphrase the great Roy Walker - it's good, but it's not the one.

Take a look at the Saab's tech spec and performance data.