Infiniti's first-ever range-extender and first-ever mid-engined car. But is it more than just a concept?

Infiniti is a company with serious ambition. In Europe last year it sold 12,000 vehicles; by 2016 it wants to be shifting 100,000 cars per year across the UK and the rest of the continent. 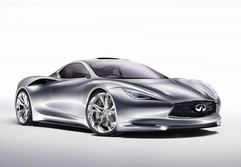 The car you see here, the new Emerg-E concept, currently sweltering under the lights of the Geneva Palexpo as it makes its motor show debut, is obviously not the car to create that volume. But it is a statement of intent, and part of the plan to ramp up the awareness of the brand in the minds of people who would otherwise buy BMWs, Mercs and Audis. And, by the looks of the Emerg-E, Infiniti is also calling for the attention of the sort of people who might put Porsches, R8s and Lotus Evoras on their drives.

So far so predictable; aspiring premium carmaker creates look-at-me sporty concept and sprinkles on green technology in an attempt to raise profile. How many times have we seen that? 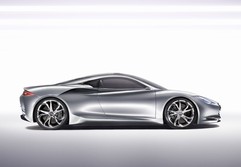 The Emerg-E is a bit different, however. Not only is it Infiniti's first attempt at a mid-engined car, it's also far more than just a concept. Waiting in the wings of this show car, you see, are two prototypes - ones that actually work, Lotus-derived range extender engine, twin electric motors and all.

It's also a thoroughly European - in fact quite heavily British - affair. One of Infiniti's challenges is to change the perception that Infiniti is a US-centric brand, and the gestation of the Emerg-E certainly manages that. Nissan (and by extension Infiniti) is of course a global company and that is reflected in the fact that it has bases in many countries, but the Emerg-E is the first Infiniti to be designed in Europe. 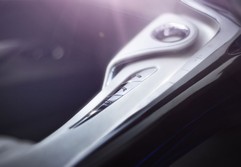 Under the guiding hand of Infiniti's Chief Creative Officer, Shiro Nakamura, much of the design work for the car has been carried out at the Nissan Design Europe (NDE) studios in Paddington, while the oily (and electrical) bits are being put together by Nissan's European Technical Centre (NTCE), Cranfield.

We'll get to the nitty-gritty engineering bits in a bit, but it's worth taking a moment to ponder the shape of the Emerg-E: "Infiniti has always had rear-wheel-drive styling," says Nakamura. "The FX is a good example - it has a long bonnet, short rear deck, and is not wedged. But a mid-ship layout usually has a different attitude - it's slightly wedged, so that's a challenge for us." 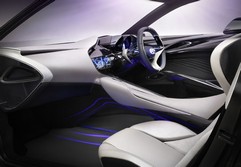 It's even more of a tough call for Infiniti, because mid-engined cars weren't part of the original plan for Infiniti or its design philosophy. "Designing a mid-ship car sounds very exciting, but at the same time there's even less freedom because of the package constraints and the distribution of weight."

The design process started with the creation of three-quarter scale model proposals from Infiniti studios in Japan, the UK and California. The winning design, the work of California-based Infiniti designer Randy Rodriguez, was recreated as a full-size clay model constructed at NDE in Paddington.

The aim has been to combine the brand's characteristic long nose with the heavier volume at the rear, while maintaining what Nakamura calls 'the emotional flow of an Infiniti.' 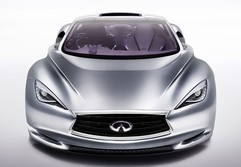 "We wanted to make it elegant yet dynamic, to show graceful power," says Nakamura, resulting in a shape that he evocatively describes as "a thin layer of clothes drawn over the body".

To fill those clothes, and to fulfil the brief to create a range-extender electric sports car with 400hp, a 130mph top speed, a 0-60mph time of 4.0 seconds and a range of 300 miles, Infiniti has drawn on a wealth of British engineering and supply firms.

Thus as well as the work put in by NTCE in Cranfield, the single-speed transmission comes from Berkshire-based Xtrac, the two 201hp electric motors from EVO Electric in Woking, the carbon fibre body panels have been created with the help of Lola composites in Huntingdon and the aero work is courtesy of the Mira wind tunnel in Warwickshire. Oh, and let's not forget the 1.2-litre, three-cylinder Lotus range-extender engine. And we probably don't need to say where that's from... 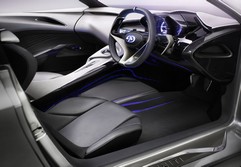 So exactly how is it constructed? Jerry Hardcastle, Vice-President of Vehicle Design and Development explains: "Our prototype is more of a tub. It's a mixture of materials, but ultimately steel and aluminium - carbon panels, though, which hang around a bonded tub that's similar in concept to that of a Lotus Evora."

This makes sense for a low-volume sports car, because there's plenty of flexibility in the platform. It's much easier to build than a full steel monocoque body too, with less tooling required, so much like Lotus and Aston Martin's flexible platforms it's possible to build whatever dimensions you need into the chassis.

There are differences between the forthcoming prototype and the concept, though. There's the mirrors (clever camera jobs in the show car), a slight height difference, and a fixed spoiler at the rear (of the prototype). "If you put the two cars side by side (prototype and show concept) you'd see the difference," says Jerry, "but show somebody two photos of the show car and our prototypes and you'd struggle to tell them apart". 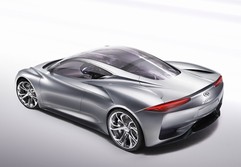 It might not be a massively likely production possibility, and it certainly won't get Infiniti to the sort of volumes that it's chasing, but the Emerg-E is an important car, both for the company, the public and the UK engineering sector.

This isn't a production-ready concept at the moment, but think of it as Nissan and Infiniti's pitch to make the UK and Europe a bigger part of the company's engineering future and you won't be far wrong. So is it Infiniti's chance to take on the high-end sports car establishment? Probably not just yet; Infiniti's got a little way to go before it's knocking on the door of the likes of Porsche. There's no doubting the scope of its dreams, though. It will be interesting to see if the show car glitz can be backed up by engineering grit when Infiniti gets around to showing off the running prototypes. We suspect it might just do that.

BMW talks up 'sporty DNA' for i4