Getting these two cars on the same track at the same time is a fascinating demonstration of how differently two companies answer a very similar brief. And how far in technology and capability terms hot hatches have progressed in just a short space of time. 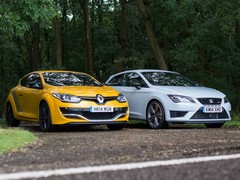 And if the Megane is predictably brilliant on both road and track the SEAT is surprisingly impressive and much more fun than initially credited. Conformity to group protocol and compliance with the complex hierarchy of sister MQB platform hatches like the Golf GTI,

means the Cupra has a much more challenging brief than the Megane but you can argue of all the permutations of engine, power output and drivetrain the Cupra has got the best deal. It's got the

trick active 'diff' but 50hp more while a weight saving of around 100kg over the four-wheel drive Golf R and S3 more than offsets their marginal power advantages. Compared with the Renault it feels fresh and modern and it all works, underpinned by the predictable if conservative logic of the parent company. And the option of a dual clutch and five doors opens it up to a much wider audience than the more singular Megane. A shame it looks so boring though. 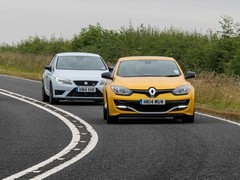 As a buying and ownership proposition there is much to commend in the Leon and in Cupra form there's proper fire in the belly too. Under all that electronic intervention it's a very, very rapid car and one with hidden talents to reward the committed.

But you've got to be pretty brutal with it to really stir it into action. And the Megane remains a much, much more focused tool and more rewarding to drive more of the time. Quelle surprise and all that but where you feel the Leon has been ruthlessly engineered to a carefully contrived level of competency driving the Megane hard is a proper two-way conversation and one that will continue well into the night rather than coming to an abrupt conclusion just as you thought you were getting somewhere. Once again it comes down to the idea of how you go fast rather than how fast you go.