Hardcore Merc breaks cover. But why isn't it black? 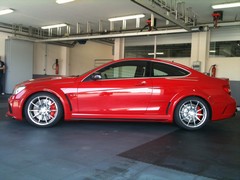 Some kind soul has spotted the latest fast Merc - a C63 AMG Black Series coupe, no less - undisguised in a corner of Stuttgart.

We've known that Mercedes has been toying with the prospect of a Black Series C-class ever since we found out about the 'regular' C63 AMG coupe, and it's fair to say that there's more than a little bit of drooling going on at PHHQ over these pics, uploaded onto the web (we presume) without official Mercedes permission.

There are no official details of the car yet, but we can tell you for sure that, in usual Black Series style, you will get extra-wide track, some seriously track-oriented tyres, and no rear seats (from the look of it, at least). 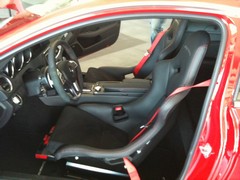 As for when and how much, the PH ear-to-the-ground device seems to suggest that the C63 Black Series will arrive on these shores before the end of the year, and with a price tag of something in the region of £100k attached to it.

We will, of course, bring you concrete info as soon as we have it, but in the meantime why not add your thoughts on the car to the existing thread on the new Black Series Mercedes (created when the PH team were busy making tea...)?