Full details of the seventh-generation Golf GTI ahead of Geneva unveiling (now with price info!)

revealed at Paris just last September was little more than a teaser - the new Mk7 Golf GTI will be revealed in production form next week at Geneva. We realised it wasn't really a concept of course - everyone knows it'd have needed crazy gullwing doors, a 50cc hybrid drivetrain and 25-inch wheels to make us believe that. 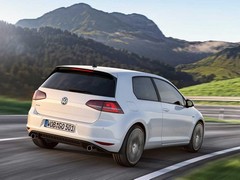 What, you were expecting a new look?

So this is the real thing, hot on the heels of

announced last week. And with clearer ground between the 'proper' petrol GTI and its diesel equivalent than ever before. They may get the same plaid seats but that's about where the similarity ends.

If the styling is, to put it diplomatically, evolutionary there are significant developments as the GTI makes it onto VW's (soon to be) all-conquering MQB platform. Power gets a slight tickle to 220hp, with 258lb ft of torque and a choice - a choice! - of manual or DSG gearboxes.

In a break from tradition VW will also be offering a more powerful variant from the off, known as the Golf GTI Performance. No holding out for special editions this time then. This has the same torque, spread over a slightly wider power band, but gets an extra 10hp, slicing a tenth of the standard car's 6.5-second 0-62 time. It'll hit 155mph over the standard car's 152mph too. It also gets bigger brakes. 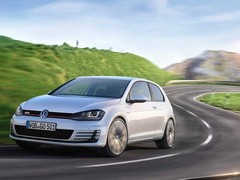 Active diff a big step up from the eLSD of old

But the really significant upgrade is the

uses a traditional mechanical limited-slip diff and is half a second quicker to 62mph, the GTI's VAQ system again 'reactive' like the ESP-based XDS seen on other hot VW group cars (and the last GTI) but a lot more sophisticated in operation than simply braking the wheel with less grip and fully variable in torque distribution via a system of clutch packs. Whether it gives the GTI the same lightning reflexes as the Megane remains to be seen but a fully active, computer-controlled torque vectoring is sophisticated tech for a hot hatch and an impressive innovation.

Like the Megane, this gives GTI buyers the choice of a more comfort-oriented 'standard' spec or more focused set-up - equivalent to the Cup spec Megane we chose to run on the PH Fleet.

Other numbers? Well in manual form the standard GTI will record 139g/km and 47mpg which, after the mid to high 20s achieved with our Mk6 Edition 35 long-termer, should come as a big improvement. Weight is a reasonable 1,350kg (43kg less than the Megane 265) and the cost, yet to be confirmed here, will be 28,350 euros in Germany. That's 1,000 euros cheaper than the GTD but with GT-spec Golfs nudging £25K here don't be surprised if on the road prices begin with a three. UK cars do get standard 18-inch wheels though! Orders open at the end of March with UK deliveries beginning in June. 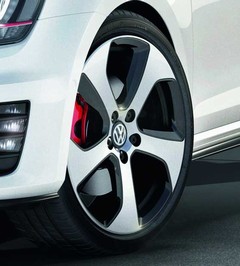 Since we published VW has been in touch to confirm pricing and some other detail info. The new GTI starts at £25,845 for a three-door manual, the DSG version £27,260. The five-door is £26,500 for a manual, £27,915 for DSG. The GTI Performance version will be +£1,000 and gets vented rear disc rotors among the changes mentioned above. The wheels in the cars pictured are the optional 19-inch Santiago, UK cars getting the 18-inch 'Austin' wheels as standard. That's Austin as in Texas we're told, not Austin as in Allegro.