I saw the best car at the LA show the moment I walked into the first hall: a 1961 Lincoln Continental – dark green, vast, dignified and incalculably cool. For me it was the stand-out machine on a curious Lincoln stand which prominently displayed several heritage models whilst hiding the new car somewhere behind a curtain. Once I’d seen the newbie, this strategy made perfect sense. 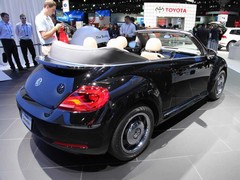 The retrospective approach wasn’t repeated by any other brands, save perhaps VW, which displayed four new Beetle Convertibles in homage specifications for the 50s, 60s, 70s and 80s. At least I think that’s what they were doing. The black car on cod steel rims looked rather appealing to these jet-lagged eyes. Amazing that we now have people making alloy wheels look like pressed steel items. Could I drive a Beetle cab for a year as my only car? No.

California is probably the most relevant place to unveil a sports car, hence Porsche’s decision to show the new Cayman. You’ll judge the design for yourselves, but the proportions are neat and the slightly higher tailgate line gives it a hint of Z4 M from some angles. The only real downside comes in the form of the Boxster – there was one a few yards away, and even though the Cayman is a seriously attractive car, it just serves to remind us how slinky the little roadster is. We’ll be driving the Cayman in February. 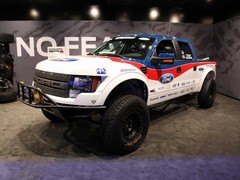 And that was kind of it as far as major international unveils went. Which I suppose marks the show down as something of a disappointment – but these things are never quite that simple.

For starters, any domestic US car show offers endless curiosities for those of us not especially knowledgeable about US models – swarms of Chargers, Challengers ‘vettes and even the new Viper, which to me looked like it was being displayed in seven-eighths scale.

There was even a competition-spec Ford Raptor, complete with cage and other trickery. Surely I’m not the only fool lurking on PH who toys with the idiotic idea of importing one of these trucks, certain in the knowledge it be undriveable in the UK? 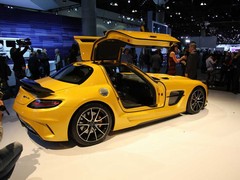 Smart had a fashion designer apply his talents to one if its vehicles – the results were fairly outrageous and not dissimilar to Soprano’s gangster Paulie Walnuts’ hairstyle. Luckily, a few yards away was the

, which although treading a dangerous line between looking plain nuts for a factory machine, and appearing to have seen some aftermarket enhancements, made quite an impact. With 622hp, weighing 70kg less than the standard car, and using a new version of the Michelin Pilot Super Sport, it’s going to fly. One techie note: the differential is an electrically actuated plate item, allowing constantly varying locking ratios. When asked if this might appear on other AMGs in the future, a senior company employee simply smirked.

Jaguar made much noise about the F-Type, but we’ve already had a decent poke around that – so the main point of interest was the XFR-S, a great thug of a 550hp saloon which makes a Sierra Cosworth look shy and retiring. The car invokes mixed feelings – on the one hand a sense of pride that a British company is gutsy enough to make such a beast; on the other a slight sense of unease that it will ask £7K more than BMW wants for an M5, and yet the basic XF platform is really a mildly updated S-Type, a car from the late 90s. Thankfully, you can remove the rear spoiler. 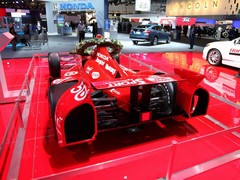 Indy Honda had a pert behind

Kia punctuated its seemingly irrepressible rise to market domination with a reminder that it can still do some pretty hateful things: there were a couple of ‘tuners’ cars from last months SEMA show, one of which was the most offensive car you will have the misfortune to view in 2012.

Honda never fails to impress me at these events. There really wasn’t much of interest on the main stand other than an Indy car, whose rear-end looks very neat up close. So as usual, it ordered a few products in a small booth to demonstrate the breadth of its engineering skills: I love little displays like this and spent more time looking at a lawnmower than I did on the entire Buick stand.

It all felt very European-dominated to me. The new Corvette wasn’t being shown, and the Ford stand was a vast empty space with a few European-looking models lurking among the weird American minivan fodder. The crowds arrived, but only when Ken Block made an appearance. But with new products and intriguing concepts from Jaguar, land Rover, VW, BMW and Mercedes, the US manufacturers appeared bland and dull. Apart from the Raptor, of course.