Up to 600hp, a 1,000kg targeted dry weight and Jenson Button helping set it up - sounds encouraging... 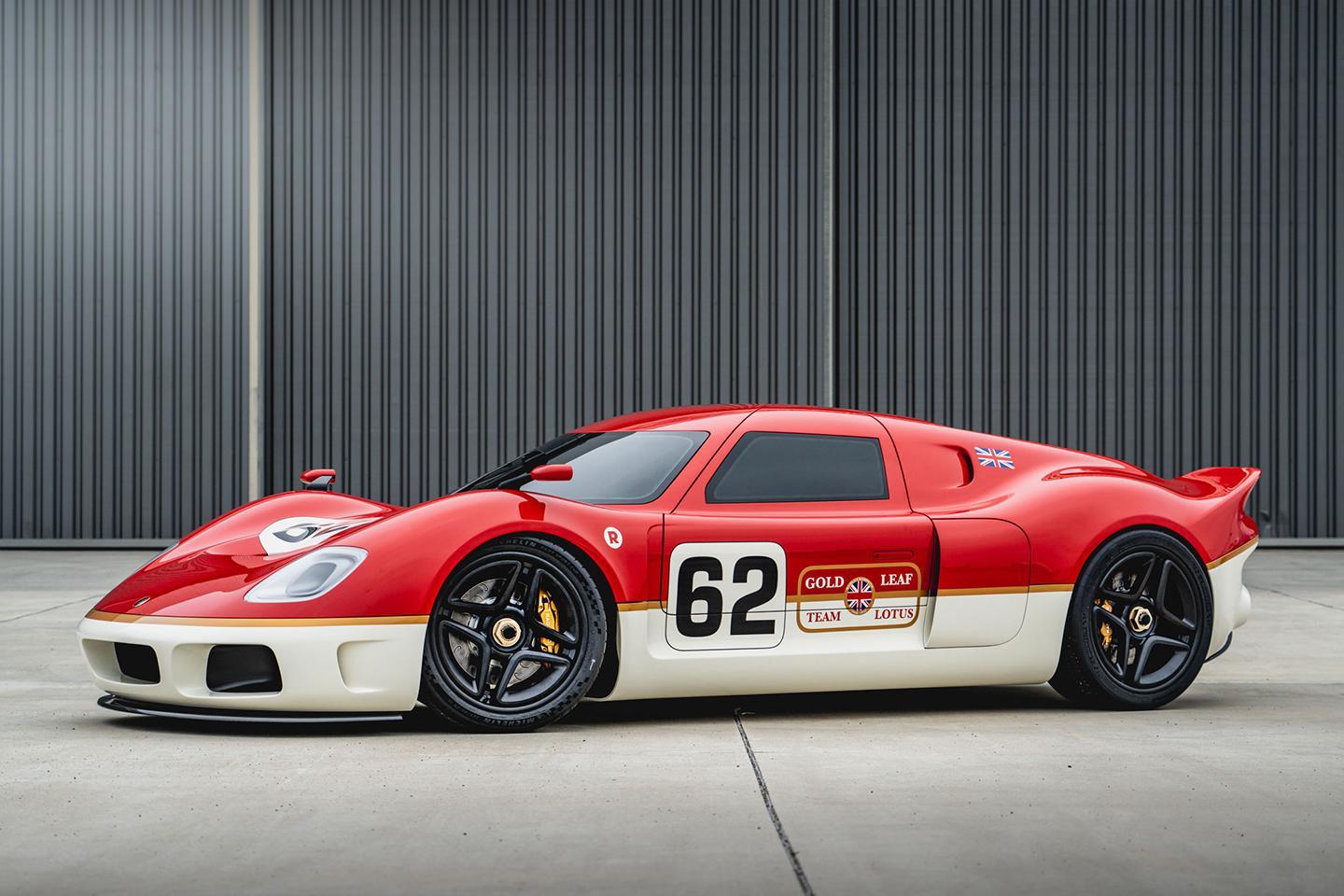 There has been plenty promised of the new Radford sports car already, from Lotus involvement to classic F1 liveries. Now we have some concrete details, with the Radford Type 62-2 just revealed at the Lyon Air Museum in Orange County.

There will be 62 Type 62s made available, with three different specifications: Classic, Gold Leaf and JPS. All will be powered by the supercharged 3.5-litre Toyota V6 that's been in Lotuses for more than a decade, and feature a titanium exhaust to really let it sing. In the Classic, that means 436hp - as per the most powerful Exiges and Evoras - with the Gold Leaf tweaked to 507hp with new pistons, rods, and camshafts, plus ECU work. The JPS will get 608hp thanks to an upgraded Harrop TVS1900 supercharger. A manual gearbox will only be offered on the least powerful Type 62, with an electronic differential lock helping get that power to the road. Both Golf Leaf and JPS use a seven-speed DCT with limited-slip diff. Interestingly, all Radfords will do without power steering, as per the Exige.

Though no secret has been made of the Lotus influence, there are some crucial differences. On top of the familiar bonded aluminium structure sits carbon composite panels, which Radford believes will mean a dry weight of less than 1,000kg. All three Type 62s will use four-way adjustable coilovers with an optional nose lift as well (because showing off might be more of a Radford priority than a Lotus one), with AP Racing brakes - the JPS using ceramic discs. The wheel on a Classic Type 62 is 17-inch front, 18-inch rear, which the more powerful cars upgrade to an 18-inch front and 19-inch rear.

That's arguably of less interest to most, however, than the styling of the Radford. After all, those after a pure Lotus experience could just get a Lotus. For, presumably, less money. Instead, the Radford is going to be a "true driver's car with the luxury appointments of a bespoke coachbuilder", with a design described as a "homage to a beautiful 1960s race car."

Obviously, we'll have to wait until the full set of images have been revealed to be certain, though even from these renders there'll be no mistaking this for a Lotus. In Gold Leaf and JPS spec a double ducktail features at the rear, with that design, the prominent diffuser, full width rear light and engine cover ensuring the Radford look is like no other. Crucially, though, given the underpinnings, it doesn't appear to be another enormous supercar that'll take up the whole road. But 600hp should keep the driver pretty busy...

For now the front end seems a little more generic, albeit with pronounced front wheel arches that lend the Radford a more curvaceous look. They serve a purpose, too, as the tops of the arches are visible from the driver's seat and should help owners place the car more accurately. As the spec alluded to, the Radford is very much intended as a driver's car. "Race car agility with long-distance comfort" is promised; the holy grail of vehicle dynamics, surely, though achieving that with Lotus architecture - not known for its refinement - sounds a tough ask. Radford says the Type 62-2 is lower than any Lotus to benefit agility, with road and track testing aiming to establish "a balanced drive and inspire confidence." Jenson Button is taking charge of the circuit work, being conducted in Arizona.

Just as ambitious is Radford's claim that the Type 62-2 will be a "true driver's car that can be used every day." Concessions include doors that take part of the roof with them to benefit getting in and out (notoriously difficult in recent Lotuses), rear facing cameras in place of mirrors inside and out plus parking cameras as well. Those wishing to take their Radford long distances will be pleased to know that bespoke holdalls will be supplied to maximise space. Again, space is not something Lotuses are known for, so any innovations Radford have come up with will be interesting to see. Apparently "luggage for two can be accommodated for road trips." They'll be kept entertained with a five-speaker stereo system, with the driver facing a six-inch TFT display. They will sit, of course, in a cabin trimmed exactly to their tastes from Radford's expert team.

The Type 62-2 premise is clearly an appealing one, then. Who wouldn't want a car that drives like a Lotus that's more exclusive, more luxurious and even faster? With the promise of "a totally bespoke and customised service from the Radford team" on top, with every customer requirement to be met, it isn't hard to see why 62 wealthy buyers might be interested. What will be more challenging than finding willing buyers, surely, is delivering on such an array of promises for the Radford sports car. If they can pull off what's being suggested, the Type 62-2 will be spectacular, but the task ahead of them is a mighty one. Expect more pics and details throughout the day. And let Radford know if you want to be part of a very exclusive group...