Home/News/Driven/Driven: BAC Mono on the road

Driven: BAC Mono on the road

The ultimate track toy the BAC Mono must be rubbish on the road, right? Er, no, actually not

"Wheeler, Noble, Chapman & Murray" says the legend on one of our latest PH T shirts (

do buy one here 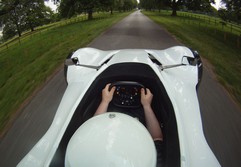 This is because Neill Briggs and his brother Ian are co-creators of sports car company BAC and, in building the Mono, have undeniably created a new chapter in the celebrated history of the British specialist sports car. And there really is nothing else like the Mono. Even though it's part of the British sports car story, it's very much a 21st-century slant on it. In fact, its F1 racer meets concept car looks have earned it some very modern publicity indeed - the Mono is slated to feature in no fewer than five driving games in the near future

The 'adding lightness' bit
The Mono is definitely in the tradition of lightweight Brits. "It very much follows the old Colin Chapman philosophy of adding lightness," says Neill, "and that's how we get the performance. There's nothing there that isn't necessary." 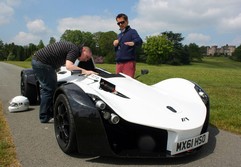 At 540kg it certainly is lightweight, and the cockpit and overall design is a study in minimalism of which Chapman himself would be proud.

Unlike with so many Lotuses, however, there's actually more than a smattering of practicality to the Mono. There are neat leather pockets on either side of the cabin, for instance, perfect for storing phones, wallets or keys, and even a helmet-sized lockable storage space in the nose.

"Ian and I both used to have S1 Elises, and we loved them," says Neill, "but there was nowhere to put all your stuff - it would just slide around the cabin. We didn't want the Mono to be like that." 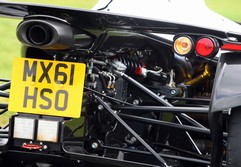 Little touches like that are perhaps the most obvious hint that, for all its outrageous looks, the BAC is intended to be usable and approachable. And very much a road car as well as a track weapon.

And it's this aspect of its character that has brought us up to Cheshire to be the first hacks in the world to drive the Mono on the road.

Time for the open road
Now, you may recall Steve Sutcliffe tried out the Mono for us last year, and very much enamoured of it he was too. But he only got to sample it in the relatively sanitised environs of Chobham test track. We want to know what the Mono is like in the cut and thrust of real-life traffic, stuck behind trucks, trundling through towns, blasting down B-roads. 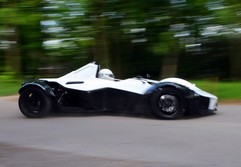 Which is why, aside from a quick and surreptitious blast around the Cholmondeley Pageant of Power sprint track for photographic purposes, we'll be taking to the Queen's Highway for our test, ending up at Oulton Park to meet the owner of the first two cars to be delivered.

By all accounts the Mono ought to make a rubbish road car. Consider the ingredients. The engine is bolted directly, racing car style, to the chassis, constructed out of a steel safety cell wrapped in carbon composite in order to help keep costs down. The seat, formed straight from the tub itself, tips you backwards into a seating position perfect for weight distribution but not ideal for vision. And the Hewland sequential gearbox is straight out of the back of an F3 car. 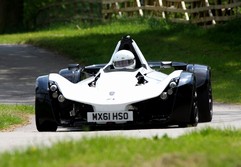 The Briggs brothers know what they're doing, however. Their CV includes work on the Focus RS, projects with Porsche and numerous others non-disclosure agreements prevent them from telling us about. You don't need to know their past to realise their engineering talents, mind - it's obvious from your first few miles of driving the car.

Put simply, BAC has managed to pull off what ought to be an impossible trick: taking the racing car ingredients we mentioned just now and transforming them into a usable road car. Even with the trackday settings from the previous day at Silverstone the compliance over the rippling B-roads around Cholmondeley and Oulton Park is genuinely impressive.

The gearbox, too, is a magnificent thing. There's nothing BAC can do about the gearchange itself - that happens in an effing quick 35 milliseconds whatever - but BAC has tweaked the throttle mapping, and played with the GCU and ECU to ensure that, should you want it, the Mono can swap r 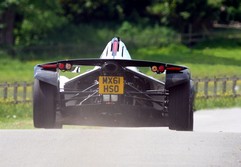 atios as smoothly as a Jaguar slushmatic. And it is genuinely tractable in town, and the 2.3-litre Cosworth engine doesn't feel strained even at low revs. Even that reclined seating position doesn't actually cause too much of an issue - the absence of a windscreen and therefore of any A-pillars gives you genuinely thoroughly decent visibility.

Tractable yet mental
Find an empty country road, however, and all that talk of tractability in town is forgotten as you wind the engine up into the 5,000-7,000rpm zone and the 285hp naturally aspirated unit really gets into its stride, allowing you to shift without the clutch and fairly flinging you down the road. It's not terrifyingly rapid, but it is darn quick. 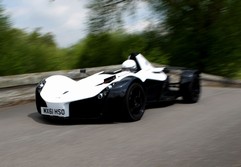 In fact, perhaps the only way to keep your licence is to save the helmet for the track and make do with a pair of wraparound sunglasses - grit, wind, and the odd fly in your face will definitely help you keep your speed down.

Buying a BAC
At Oulton I meet with a couple of owners, one of whom, Rob Stanbury, is just shaking down his pair of Monos - the very first cars to be delivered. He's going to be renting them out to trackday goers. A pretty brave move given there won't be the safety net of an instructor alongside. Still, if the Mono is as approachable on track as it is on the road, he shouldn't have anything to worry about. 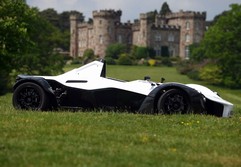 The other owner I meet is Andy, a Brit living in California. I ask him the thing that's really been bugging me - namely does it bother him that he can't put a passenger in to show off to/scare silly? "I like the glorious privacy, to be honest," he says, grinning from behind a pair of Oakleys. "It's the same reason I like motorbikes."

I see where Andy's coming from. And, aside from the purchase price, he's just successfully countered the only reason I would not buy a BAC Mono. Although I suspect my PH salary won't allow me to stretch to the £75K asking price without a fair bit of saving-up. And even then I'd have a bit of a wait, because the BAC boys are, at the moment, selling every car they can build.