The good and the bad of daily driving a supercar (spoiler: it's mostly good)

So our time with the McLaren 570GT is up; truth be told, it's been up for a little while now, I've just been putting off writing about the car's departure. 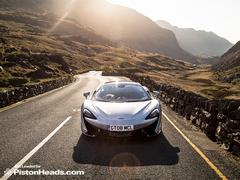 Of course the majority of the its time with us was spent with Dan, my 1,000 miles or so coming at the end of its term after he reluctantly surrendered the keys. And reluctantly is being polite... The

was the highlight, of course, so this report will have to focus on some of the less positive points of pseudo supercar ownership. This isn't ending on a downer, simply pointing out that the 570GT, and most cars like it, can be a bit of a pain to live with sometimes.

The parking sensors are automatically activated when the car dips under a certain speed, even if you've silenced them, regardless of if reverse has just been engaged or not. In traffic, this means they're going off nearly constantly as, even if you hit the button to stop them, you're up above and then down below the activation speed again and again. Cyclists, motorbikes, cars in another lane, cars in your lane; it doesn't take much to set them beeping. Of course you can turn them off completely, but you shouldn't have to.

The DAB reception was oddly inconsistent, compounded by a bizarre and unresponsive touchscreen that means you swipe for stations rather than scrolling. And the nav still isn't as good as some rivals, a bit awkward to programme and occasionally sluggish to respond. There's an argument to say those things don't matter in a 570hp supercar, but if this is meant to be the everyday usable McLaren then those areas do need to improve. Pleasingly the 720S has already shown signs of getting better, though the GT still lags behind something like a 911 or R8 in terms of interior intuitiveness. 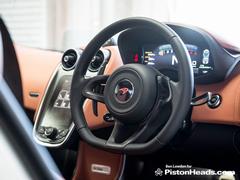 While I'm moaning - there are positives, I promise - the nose lift occasionally made some very unpleasant noises when rising, though without any consistency - sometimes it would, others it wouldn't. And it would do it at different speeds, different temperatures and with steering lock both on and off. We didn't investigate any further - is this something any other owners have found?

When you are mooching around at low speed, you'll be aware of how wide the Sports Series is too: 2,095mm is a fair bit more than an R8's 1,940mm. And if your parking skills are as woeful as mine...

How far this sort of thing matters really depends on how you plan to use your £150,000 supercar. If you just want to bimble around with a minimum of fuss, while making loads of noise and looking cool, then an R8 is probably still the best. If you want subtlety with your speed, a 911 Turbo S remains unmatched. But, as we discovered in Wales, if you want to drive your supercar and revel in the experience, the McLaren is the car to have. It may not be as accommodating everyday, despite its GT billing, but it more than makes that back elsewhere. 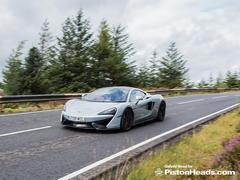 Genuine surprise? Er, it did 29mpg once

There's an argument to say that the 570GT isn't far enough removed from the 570S to create a discrete model in the line up. And while it perhaps isn't as soothing as some of the alternatives, the additional practicality, tweaked styling (which I prefer) and more luxurious feel of the GT make it feel distinct enough to me. Personally an ideal specification would be a car that looks like a GT and drives like an S, which of course it isn't possible. The GT on the P Zero Corsas seems like the best compromise available.

All of this debate on spec, width and flipping DAB ignores the more valid point though: driving around in a McLaren, be it this or any other, is joyous. People point and wave, other drivers let you out of junctions and the experience feels fantastically special. The visibility, the control weights, the speed, the silly doors; there's a tangible sense of occasion that means no journey is forgettable, and it regularly feels worth every single penny. If not more. 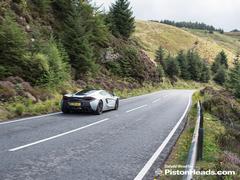 Not the easiest supercar, but still the most rewarding

Speaking of money, it's worth discussing the exact spec of GT08 MCL to conclude. Though I never told him as much, I admired the spec that Dan went with; subtle while still exciting, and distinctive without being in your face (the spec that is, not Dan). Though he spent more than £20K on options, when you can spend £3,490 on forged wheels it's easy to see how that adds up. I could probably do without the interior carbon, which would get it to a fraction over £175K, but the rest of the options felt more than worthwhile: despite the noise the nose lift was useful, I loved the colour combo and the exhaust added some theatre, albeit more for those outside than in.

Would I buy one? Absolutely. It could be better resolved as an everyday prospect, but all the reasons why you would want a supercar - the speed, the styling, the excitement, the sense of giddiness every time you approach it - are nailed on, and better than the rivals. That this is McLaren's first attempt at a more luxurious, less focused supercar bodes extremely well for the future, because this is fantastic.

Previous updates:
The joy of specs
Taking delivery
570 GT videoblog
Enjoying the new supercar smell
It's no track car... but it's pretty good on track!
Off to the dealer to sort a few squeaks and rattles
Is it time to try the option tyre? Of Corsa!
Perfect road car? There is a case to be made!