Autocar says a £2m flagship is planned as a statement of intent from Geely. First details here 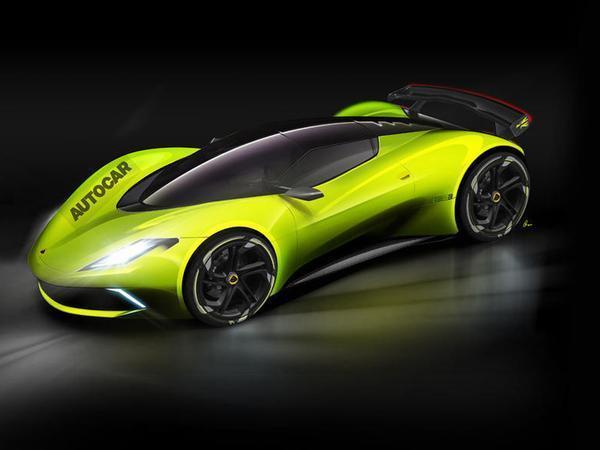 Now we all know that grand plans for Lotus sports car expansion have, well, not always reached fruition, to put it politely. So while news of a hypercar humbling electric flagship, as reported by Autocar, sounds jolly tremendous, reservations will have to remain until there's something rather more tangible than a render and a rumour.

Still, what's there for now is encouraging. Leveraging the EV expertise of the Geely empire - remember that it now encompasses Volvo, Polestar, Lynk&Co, the London Electric Vehicle Company and more - the Hethel plan is said to be a for a £2m, 1000hp+ electric rocketship to take on the hypercar hierarchy. All while keeping it lightweight, because a heavy Lotus would rather miss the point like a piranha without teeth. No small challenge, then...

Autocar says the concept is currently under the working title of 'Omega' - an odd one to choose, given 'Lotus Omega' has happened before - and is in development at Hethel, as Geely attempts to rejuvenate the HQ. With the car rumoured for a launch early in the next decade, expect a new generation of batteries and motors to deliver improved range, efficiency, charging time and so on. Autocar has cited the NIO EP 9 as the most logical target for now, which you would have to assume the Lotus would need to surpass in terms of power, performance and lap time.

Beyond that, the car will obviously have to be on entirely new architecture, Lotus having never embarked on an electric powertrain before, or indeed anything all-wheel drive. Well, until the SUV, of course.

Predictably enough, Lotus hasn't confirmed anything about the Omega, or Carlton, or whatever this car might actually be. The quote on Autocar is as follows: "Lotus's development team is exploring numerous engineering projects, across multiple vehicle sectors, using several propulsion systems. As part of the development process, these projects undergo continual and stringent valuation and only the best will reach production." Make of that what you will.

If it's pulled off, if it actually happens, then a Lotus EV hypercar could be spectacular. But, of course, we have been here before, so let's see where the project progresses. Is this the way for Lotus to reestablish itself at the forefront of sports car tech, or should the revolution begin from the bottom up? Comments, views and predictions all welcome - we'll update the story when there's more to say.