Home/News/Motorsport/24 hours of Zolder - from the driving seat

24 hours of Zolder - from the driving seat

They say that every 24-hour race has its own distinct flavour. Le Mans is probably champagne and caviar, with Monday morning hints of Bacon and Brie. The factory teams spend in a single week, budgets that would run a decent touring car for a whole year. The Nurburgring 24-hour is best characterised as cold Bitburger and warm currywurst, with undertones of pine forest and barbecue smoke. All while still feeling more German than a five-year adventure holiday to France. 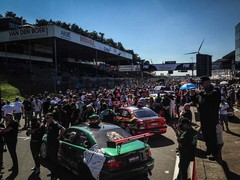 Over 60 cars on the grid

But last weekend I got to try the chips, mayonnaise and waffles that is the 24 hours of Zolder. Nothing pretentious or posh, just genuinely enjoyable grassroots racing over that iconic timescale.

From a lowpoint of just 17 cars entered in 2011, the 24 Hours of Zolder has re-emerged in 2015 as a highpoint of the European calendar. And the secret?

"We stopped the GT3s entering, we changed the rules" says the Zolder 24-hour Team Liason Officer, Andy Jaenen. "When I suggested it, people were scared we were going to lose the only reason people were still coming to watch the race. But they were wrong."

Last year's event, with over 50 cars on the grid, was dubbed "the revival" by the Benelux regional media. This year was the confirmation - Andy's GT3 removal operation had worked.

61 cars on the grid, with cars from France, Italy, Germany as well as Holland and Belgium. Hundreds of drivers and thousands of specators on the gridwalk. The battle at the front was to be between the production-based Porsche 991 GT3 Cup cars and Italian Wolf prototypes (think Radical with a Honda K20-based motor and a bit more Italian flair). The phrase tortoise and hare doesn't do either car justice, but it's the only way to succinctly describe the battle that played out at the front of the field between the reliable and dependable Porsches and the easy-to-damage prototypes. 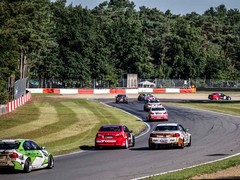 And nearer the back of the field? Well, that's where we came in. Despite the efforts of Marc VDS driver and Spa 24-hour winner Markus Palttala to qualify us in the top 50 per cent in a

, the truth is that our BMW 325i was destined to be one of the slower cars on the grid. A combination of low power to weight (230hp and 1,350kg) and control tyres (road legal Yokohama AO48s, versus slicks for every other class) meant that even dipping under two minutes a lap took levels of dedication and mechanical fury wholly incompatible with finishing a 24-hour race.

Which is why our Team Chief (the same Andy Jaenen above, who's also currently spotter to the Riley Team at Daytona 24 and serial Zolder podium occupier throughout the 90s) made it very clear that 2min dead to 2min 2sec was our optimum pace.

"It's possible to make that pace with smooth driving, and no second gear," he promised.
So while other cars from our nine-car class flew out of the 4pm start clocking 57s we settled into a rhythm that saw us drop as low as the late 50s in overall position and nearly last in class after only a couple of hours. But it didn't take long for that trend to reverse. 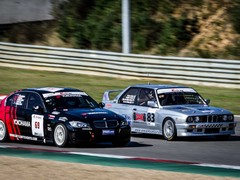 Compared with the Nordschleife, Zolder is reassuringly old-school with little run-off and plenty of trickiness through the forest. But it's devoid of rest periods. Even on the two short straights, total concentration is required to manage the constant flow of traffic (mostly from behind, but with the occasional overtakes). And not using second gear means you feel painfully slow as the paddle-shifting, torque-heavy BMW M235is fire out of the bends.

Despite a tap from behind in the night, and a cheeky sub-two laptime when I got a little red mist, the car ran faultlessly. We even pulled out a few double-stints (right up to the maximum three-hours permitted by the rule book) and started to make up both time and positions in the pits as much as on the track.

Those cars that had been lapping nearly eight seconds a lap faster had all broken, with gearbox or overheating problems. The next day air temperatures rose to the mid-30s, the pace slowed even more as tyres overheated and nerves began to break. After two double stints overnight and mid-morning, I was pretty tired. It fell to the two Skylimits rookies (local boys Davy Suffeleers and Robin Put) to take the car through the last three hours in solid style, while I boiled in my racing suit in reserve. Fourth position was pushing us hard with a late surge, but they couldn't catch us, and along with our other rookie team-mate (Simon Podhalicz from the Netherlands) we took to the lowest step of the podium to spray the bubbly. 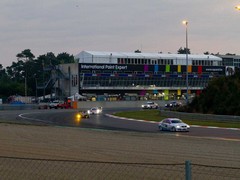 And the X-factor didn't have anything on us, because Davy has dreamed of racing Zolder since being a boy, and Robin's dad, Pascal, actually died in the paddock, just minutes before the 2014 race. He not only gave Robin the racing bug - he was also Andy Jaenen's right-hand man and deeply involved in Zolder from an organisational point of view.

So if you think that hug between Andy and Robin looks emotional? Trust me, it really is. From such tragedy the team has forged a brand new and more positive story through a lot of hard work and financial sacrifice. I was honoured to drive with them. Palttala couldn't break his commitments to a Sunday drive in the German GT masters, so I stole his trophy and gave it to Andy.

Much as I'd like to stay with my new Belgian family, I can't. Because I'm about to sample my third taste in a season of 24-hour cuisine, this time with Milltek Sport. It's probably going to taste like paella and sweat. But I still can't wait.