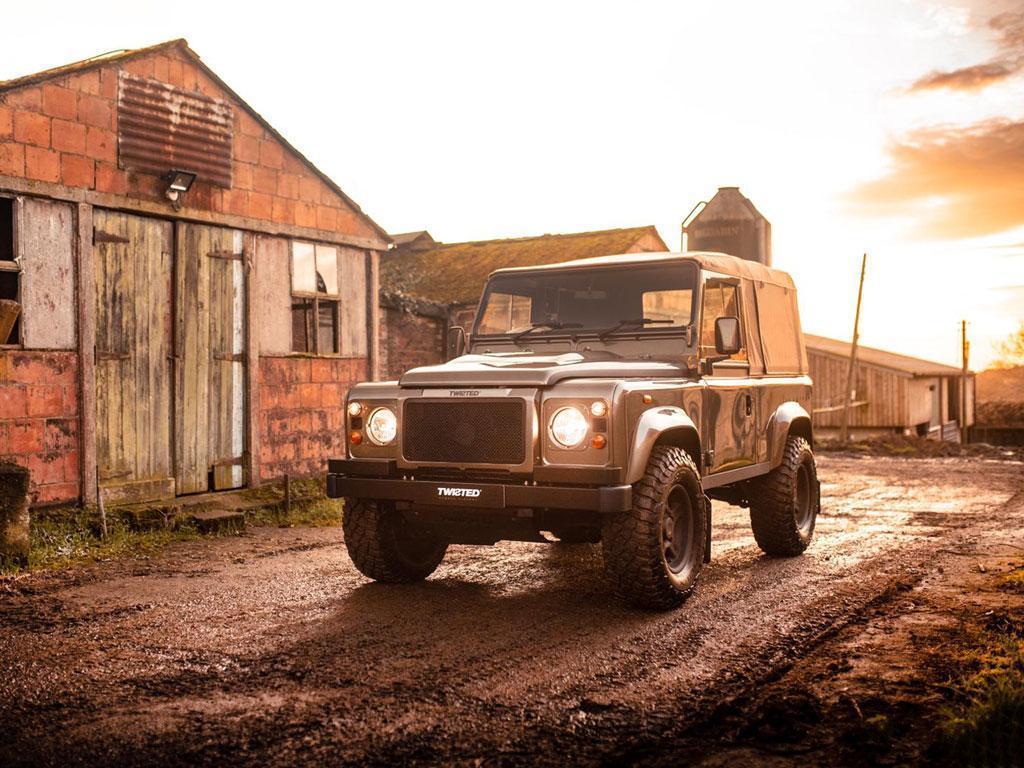 Twisted has used the fourth anniversary of the Defender’s last day in production to confirm the completion of its first Defender for the North American market. The $250k 90, which is already available for order, is powered by a crate Chevrolet 6.2-litre V8 (what else?) and has been finished in a ‘traditional’ theme, with green paint in dedication to the original. As revealed to PH earlier this month by North American boss Tom Maxwell, the engine has been given a boost from its standard 430hp and there’s a raft of infotainment and trim upgrades inside. But as far as Defender restomod work goes, it’s set to be smart and subtle entry into the new market.

By contrast, the second, presently unfinished Twisted to launch over the pond will be a more aggressively styled 110, designed to appease America’s overland enthusiasts and help push total US sales to a predicted 200 cars within five years. Twisted North America’s efforts to woo potential buyers will begin proper with an invitation-only launch and drive event with the Classic Car Club of Manhattan, where both models will be available for test drives. Given the exotica that regularly attends these New York meets, we don’t doubt Twisted will secure a few orders for its high-end Defenders on the day. Plus a few more when the cars are shown at the following NY motor show.

We’d expect the same level of interest when the company begins its soon-to-launch Middle East operation, which will be based out of Dubai with a showroom and service workshop in a region where expensive, high-end SUVs are the height of fashion. The company has, unsurprisingly, already exported vehicles to the region, but with rapidly growing demand it’s opened up a shop locally, with Matt Duckett, recent recruit and former JLR employee, heading the operation. Naturally, we’re expecting a region-specific model to be created to attract attention in the UAE in the coming months.

Those in blightly will be happy to hear Twisted hasn’t forgotten about its Yorkshire home, with the staff there having just finished the build of a new variant for the UK, called the Lightweight (pictured top). Just 10 examples will be made as part of the company’s Remake History collection. The new variant has been created in dedication to the British Army’s original Lightweight, which saw service between 1968-1984, with the first cars to arrive on roads in time for the summer.

“Four years to the day since the last classic Defender rolled off the JLR production line, our continued expansion illustrates the enduring passion for this iconic vehicle that exists not just here in the UK but across the globe,” said Twisted founder Charles Fawcett. “As guardians of the heritage of this British icon, we’re incredibly proud of how Twisted is continuing to grow. We’re delighted to bring the Twisted experience to an even greater audience.”

It's no secret that Twisted's reputation in Britain is partly built upon its fail-safe Yorkshireness. One only needs to pick up the phone to its Thirsk-based operation to hear it in action. But will that plain-talking charm carryover to America, where the image of God's own county is - dare we say it - less well established? That's the first challenge Twisted North American director, Tom Maxwell, faces in the run up to the company's US launch this quarter. The first car developed on US soil is due to be finished by February and it'll be suitably booted for America with a Chevy V8 under the bonnet. Twisted isn't hoping to appease new buyers by turning the Defender all American, though. Its strategy for cracking the States actually amounts to quite the opposite.

"We might be 3,500 miles away from Twisted's Thirsk home, but we're staying true to our Yorkshire roots here in the US," Maxwell tells PH. "Our American clients know how iconic the Defender is, and we believe they understand the significance of the Yorkshire link because many Land Rover lovers are Anglophiles. The Yorkshire badges will remain on the American model and we'll be serving Yorkshire tea in our new Virginia base."

Maxwell assures PH that Twisted is not in the US simply to bring a bit of Thirsk to the East Coast, but to take advantage of a gaping hole in the American restomod market. Thanks to the miniscule number of Defenders to have made it across The Pond through official routes - and the US's import ban on unhomologated cars under 25 years old - Maxwell reckons there's nothing close to a Twisted Defender in the country at the moment. To really hammer the point home, the company is launching with a run of 12 market-specific models that significantly build on the base spec of the entry-level British Twisteds.

"In the US, because of the added costs to sell our vehicles there [such as shipping], we're adding extra things to bring up the standard spec for the base price," says Maxwell. "The engine swap is to an American motor, the LT1 Chevvy V8, with a matching eight speed automatic. We'll add an infotainment system, front and rear cameras, parking sensors and electric windows as standard, too."

That's on top of the usual Twisted stuff, including added soundproofing, soft touch materials and the upgraded cabin, as well as the exterior work that helps make its Defenders instantly recognisable the world over. Due to the aforementioned shortage of supply, most of the cars will be left-hand drive, 25-plus-year-old Defenders sourced and shipped over from Europe. Maxwell explains that Twisted's UK HQ will still be involved in the work, with several cars using younger bodies that are re-worked in Yorkshire and then sent to America for mating with the rest of the build.

Predictably, the Defenders are being billed as high-end products, best illustrated by the final cost for each of the first dozen examples: $250,000. Which is a lot. But Maxwell emphathat the extent of the work - not to mention the higher base specification of the US model - helps to explain the asking price. These are cars, he explains, to be used everyday, "on the highway, with enough power to deal with the US's short slip roads, and full Defender off-road capability with the high and low range transfer case". In fact, America's varied landscape is encouraging the launch of several upgrade packages which are different to what is offered in Britain, so these Twisteds can survive the vast challenges provided by an American landscape. Want a Baja spec car? Or, as demonstrated by the 650hp V8 LT4-powered platform developed with Californian restomod specialist Lucra and shown at last year's Goodwood Festival of Speed, something ridiculously extreme? Twisted has you covered. Although Maxwell's team will be careful to retain the Defender's original character as much as possible, so he says not to expect any "pimped-out" creations.

"We're keen to introduce new features to cater to American demands," adds Maxwell. "There's a big overland market in the States for us to enter, for example, where people need camping equipment, extra fuel tanks and solar panels on the roof of their off-roaders. And we understand some people will want better on-road performance, so we're developing a slightly lower suspension package. We're really excited about all of this."

The first American-made Twisted will - naturally - be a 90 painted in green to "show respect" for the Defender's heritage, with a public debut planned at the New York auto show this April. A "more raucous" 110 will follow it to demonstrate the lengths Twisted can go to in Defender enhancement, with Maxwell expecting all 12 of the opening models to be snapped up quickly if early customer enquiries are any indication. Beyond that, the target is to have sold 200 American-made cars in the next five years.

"We're going head and shoulders above what everyone else is offering in this market with these cars," says Maxwell. "So we're feeling confident. Everybody has been a little bit afraid to put a certain price tag on the Defender, but I know from experience of selling products to the US that the only way to make quality like this is to charge the right price. We're not looking at the $90,000 to $100,000 market because then we wouldn't be able to achieve what we believe necessary. Our asking price will include plenty of customisation options that simply wouldn't be possible for less. The cars will all be unique - and nobody will have to scrimp on specs."

Plainly Twisted is targeting buyers who value the heritage and unique character of the Defender, as well as those wanting a functional, uber-cool off-roader. They're precisely the sort who would fall for Twisted's plucky Yorkshire reputation, be excited by the prospect of a trip to the motherland and the firm's HQ, and love to - as Maxwell puts it - "properly experience and drive the vehicle in its natural habitat". And yes, they'll be wealthy.

"The business is not all based on selling cars, either," continues Maxwell. "As we do in Britain, we'll offer upgrade packages for non-Twisted Defenders, including exterior, suspension and interior packages. We'll have ramps in the workshop and our Virginia home is based close to a race track, which we have access to, so we can set these cars up to each customer's demands. We're very excited to get going."

Should all go to plan, this very British business will continue to grow, with plans to expand into the Middle East next, where the big-engined SUV market is virtually bottomless. Naturally there are risks associated with its expansion, but the firm clearly doesn't feel like it's taking any major gambles.

"I'm confident it'll work - and very excited to get to introduce people to the Defender", says Maxwell. Of course, it won't hurt that the new Defender's forthcoming global launch will cast a bright spotlight onto the model and its lineage. Expect Twisted to take full advantage.