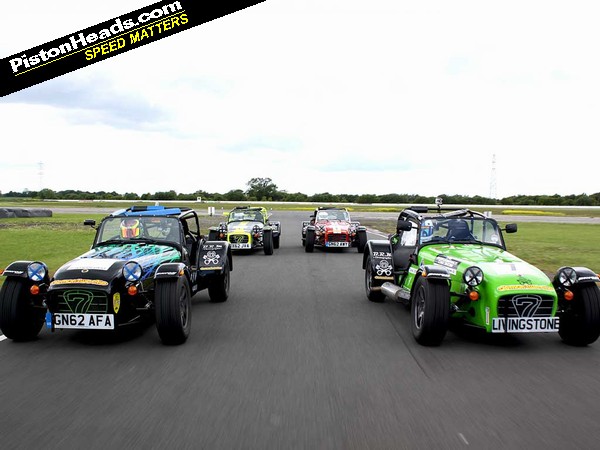 Round three of the Caterham Academy was at

. It’s very open and allows quite a

, which is good for us Academy racers even if the forecasted rain wasn’t. 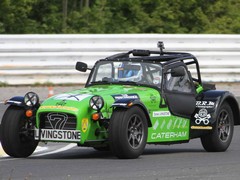 Dan in action at the Blyton sprint round

The intense sprint schedule was the same

, meaning two practice runs and then two timed runs. Imagine arriving at a track for a competitive event, where you have never been before, without having any sighting laps and pushing yourself to go flat out from lap one. Incredibly testing but I was up for the challenge!

My dad and I made the 200-mile trip up to Blyton on the Friday afternoon. I drove up on the day for Snetterton and was pretty tired by the time I drove home, so this time made the decision to stay in a hotel the night before, waking to unexpected but welcome sunshine. At the circuit I prepared the Caterham for the day ahead. Which basically means removing the roof, fitting the timing strut and taping over the handbrake so it doesn’t catch on the wrist restraints.

My first practice run went reasonably well and put me fifth. I knew I had not taken a couple corners correctly and could build on my first attempt. My second practice run went even better and I managed to reduce my time by 2.5 seconds to 78.13, putting me second fastest. Then the heavens opened. A couple guys were out on track so I imagined this caused their laps to be a little tricky but the sun reappeared and the track soon dried. 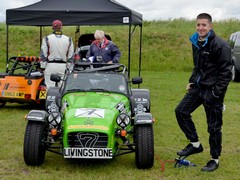 DIY race prep in the Blyton paddock for Dan

Over lunch championship co-ordinator Jennifer Grace recruited me and three others for some promotional photographs. Following the tracking car we were told to drive close to each other and swap places. This gave us a hint of what it was going to be like on track together racing each other. I can't wait!

For the timed runs I thought it would be best to get a banker lap in first. I made a good start and went up the gears to third and was flat out (as before) heading to the first corner. I carried a bit too much speed and the back of the car stepped out. I made a quick correction but then it snapped again and I couldn't correct it this time. The car span and I had ruined the lap. This lap was classed as a fail as four wheels had left the track when I span. I was disappointed and when I arrived back in the paddock I noticed the sky was clouding over again. This made my mind go into overdrive as I knew if it did rain that I wouldn't be able to post a fast time due to the conditions and that everyone who posted a lap time in the first run would be much higher than me in the standings. Luckily it didn't and the sky started brightening up by the time my second run had come round. 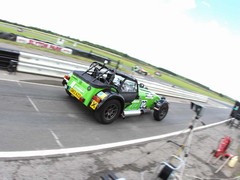 An early spin inspired Dan to bank a quick one

The pressure was on and I knew I had to post a competitive time. I made an even better get away this time and successfully made my way through the first corner and all the way to the finish line without any problems. I was conservative and this showed - 79.58. It was then announced that there would be a third timed run. This was music to my ears! Banker lap in I pushed hard and got a 77.17, putting me in fourth! It was my best finish of the year so far and I was over the moon!

Next up for me is the first Academy race of the year on July 13-14 at Donington Park. I'm very excited to get out on track for my first ever race and will be pushing very hard for a good result.

Marshalling
Being part of the Academy you have the option of becoming a marshal for the day in return for five championship points. Having always wanted to give it a go anyway I straight away arranged a date with the MSVR marshal co-ordinator for the Mini Festival at Brands Hatch. After the safety briefing I was thrilled to hear I would be located at the bottom of Paddock Hill. 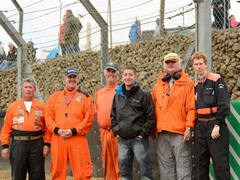 Marshalling helps Academy drivers give a bit back

I was greeted by the chief post marshal Peter. Peter has been a marshal for years and has travelled to various countries to marshal motorsport from club level racing to Formula 1. He was in charge of the post and four other marshals called Kelvin, Owen, Richard and Barry.

During the day I asked them all which drivers they have attended to, the roll call including Michael Schumacher, Kimi Raikkonen and Paul Di Resta with plenty of fascinating stories to listen to as the anecdotes kept coming.

The track action began and Minis were out on track qualifying for the afternoon races. As it was my first time marshalling I was only allowed the other side of the barrier if the session was red flagged or the chequered flag was waved. As the first Mini qualifying session was ending two Minis had an almighty off, one of them barrel rolling twice. This was a huge crash which caused a lot of damage to the car. Fortunately the driver was OK and able to extricate himself. After the session was red flagged I made my way on to the track and helped connect the towing strap to the car. I then helped prepare the race track again by sweeping the gravel off the circuit.  A real buzz and the marshals have a great sense of camaraderie.

All in all it was a great day and I will definitely marshal again someday. 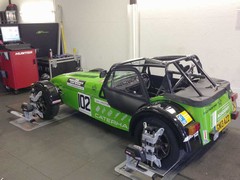 A quick check to make sure all is in order

After the sprint events a couple people mentioned it is best to get the Caterham checked over. After driving approximately 3,000 miles in the car the suspension tends to settle and will be slightly lower than when it was when I first got the car so I wanted to make sure that the car was still meeting all of the championship technical regulations for peace of mind. A few of the Academy guys have used a company called DPR Motorsport and had recommended them highly. I gave David Rowe (DPR Motorsport) a call and arranged a visit.

When I arrived at their workshop there was around 10 Caterhams in for some maintenance ranging from Academy cars right up to R300. It was cool looking around the R300 to see what a top level Caterham race car looks like. David then explained exactly what work he was carrying out as he was going along. The attention to detail was brilliant and this is very reassuring to see. DPR use a Pro-Align Hunter four-wheel alignment system which has amazing accuracy on setting cars up. They have their own approach to corner weighting and are able to quickly measure castor and equalise. Once the car was set up they also renewed the front brake pads.

Dan in action at Blyton.

Previous Updates:
The lucky winner of our 2013 Caterham Academy drive is announced
The season begins - Dan collects the keys to his new car
Practice makes perfect
Battle commences at Aintree