Virtually the fastest McLaren ever made...

McLaren has joined the long list of manufacturers to flex their considerable design muscle in creating a futuristic concept for Sony's Gran Turismo series. Marques from Bugatti to Citroen have previously taken on the challenge, set by franchise creator Kazunori Yamauchi, to dream up a

which embodies the characteristics of their brand. 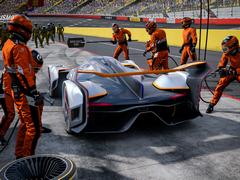 The McLaren Ultimate Vision Gran Turismo - still a catchier title than MP4-12C - is said to demonstrate the British manufacturer's "design thinking, focus on technical excellence and continued commitment to putting the driver first." To that end, power for the rear wheels, theoretically, comes from the twin-turbo, 4.0-litre V8 seen in the 720S; whilst the front wheels are driven by high output electric motors. This results in a total power output of 1150hp, with 940lb ft of torque instantly available from launch thanks to electric propulsion and all-wheel drive.

Extensive use of carbon fibre throughout results in a virtual kerbweight of just 1,000kg, with centrally mounted carbon-ceramic brakes keeping unsprung mass to a minimum. Handling is further improved by "ultra-advanced active aero" aiding cornering by opening a series of tiny apertures on key external surfaces to create additional downforce, without the need for large moving surfaces. Inside the car meanwhile, the driver is positioned head first, giving an unobstructed view of braking points and apexes. 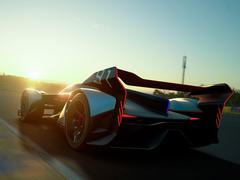 Whilst McLaren is at pains to stress this is not a prototype for any future model, the lack of design constraints does allow for an interesting insight into the kind of technology we might be seeing in the next decade or so. Imagine being shown a P1 GTR when Gran Turismo 4 came out back in 2004...

Speaking about the project, McLaren Design Director Rob Melville said, "We wanted to break new ground and to innovate and the McLaren Ultimate Vision Gran Turismo does exactly that. It puts the driver absolutely at the centre of the action, delivering a sensory overload with incredible sound and awe-inspiring acceleration." Sounds good to us!

With the release of the game now, finally, less than a month away it shouldn't be too long before players get behind the wheel and experience the car for themselves. Gran Turismo Sport comes out exclusively for PS4 on October 17th.

A new Dacia Sandero or this... | Six of the Best