The worst used car in Britain

And the worst used car in Britain is... A petrol Land Rover Freelander Mk1. The verdict comes from previous owners posting on a review website, who were ruder about it than owners of any other vehicle.

This is perhaps unsurprising given that most petrol Freelanders of that generation use the Rover 1.8-litre K-series engine with all its associated head gasket woes. The other petrol of course was the 2.5 V6, which is rarer than cheese-and-onion flavour Digestives. 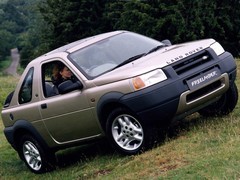 One customer 'gave up after 2 engines'

The website is WeLoveAnyCar, run by WeBuyAnyCar, which asks people who've just sold a car via them to tell others what they've thought. A sample comment: "Spent more time in the garage than being driven. gave up after 3 head gaskets and 2 engines."

From the total 572 Mk1 Freelander reviews on the site, the TD4 diesel actually does quite well, so it's pretty much just living with a sluggish, unreliable and thirsty petrol four-cylinder that annoys them then. On the plus side, it does make them quite cheap - £1,495 here for a 2000 car. And as we know, the head gasket problem can be averted if you're wise to its issues.