Is the last petrol-engined Macan also the best one yet? 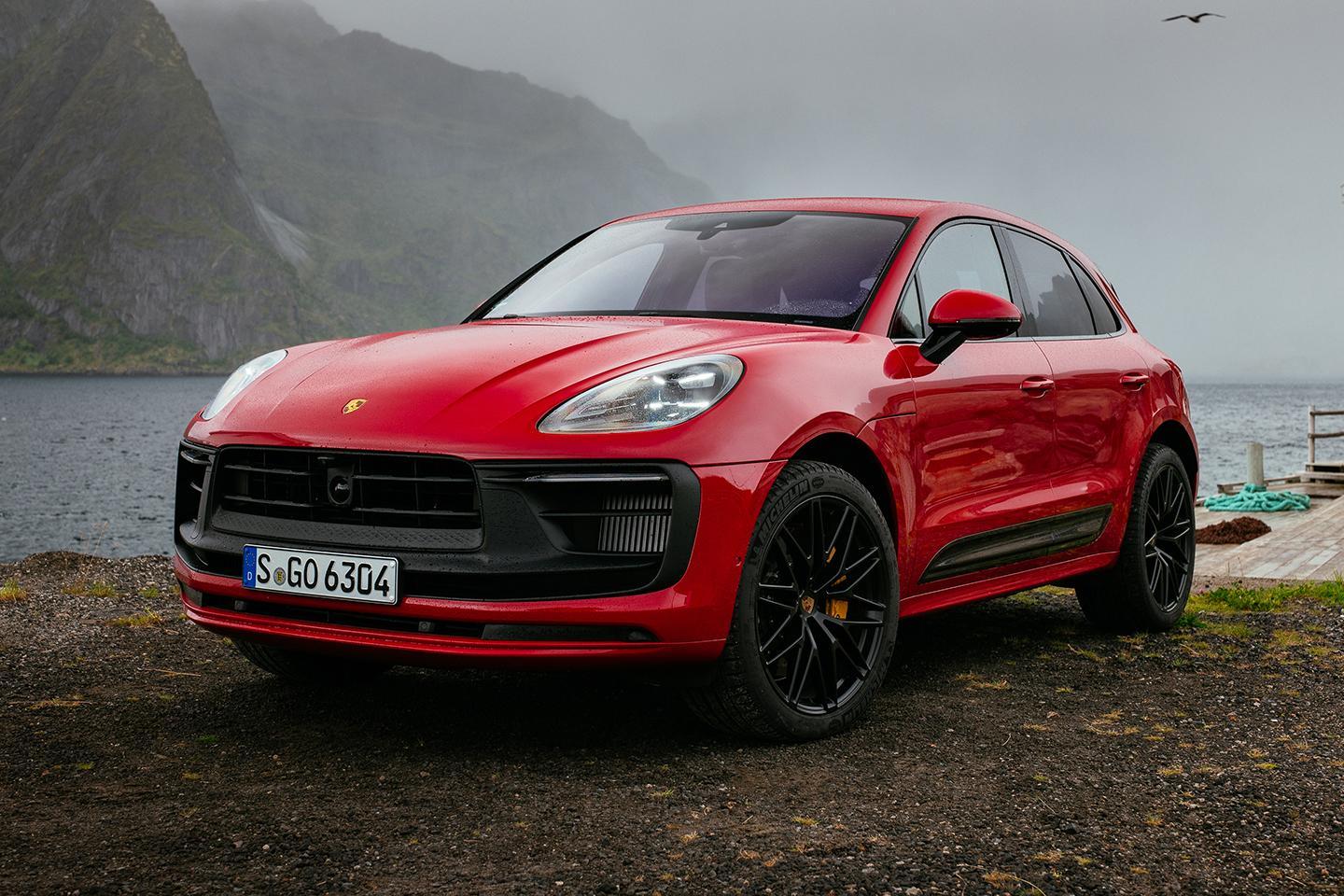 On the face of it (meant both literally and figuratively), the latest Porsche Macan looks a tough sell. This is a model launched in 2014, don't forget, which makes it a lifetime ago in the current automotive landscape. We already know that a bold electric replacement is on the way, and given the precedent set by the Taycan, it's not hard to imagine many people holding off for the more progressive version of Porshe's smallest SUV. Added to which, this might not be the most sympathetic facelift the manufacturer has ever executed. For the GTS seen here almost the entire front section is blacked out (lesser models get more body-coloured inserts), which looks a bit heavy handed to these eyes. The situation isn't helped by a giant assist camera on show just above the numberplate, and gaping intakes revealing radiators you'd probably rather were hidden.

Still, there have been many very good Porsches that haven't exactly been lookers. And there are a few key reasons why the Macan might appeal even in its dotage. The Turbo has been dropped for this update, but the GTS has received a power boost to compensate, which means the full 440hp of the previous flagship with the most focused Macan chassis offered. Given the praise lavished on this car for its handling over the past few years, this never-before-seen combination sounds a promising one.

Let's not forget the new interior, either. We all know nothing dates a car like its driving environment, and that's just as true for the Macan as anything else. Look at an early one now and it's a baffling array of buttons, switches, dials, and knobs. Not a useful amount to complement a functional touchscreen screen, either, but a proper hailstorm of touchpoints. The blank switches and a few sub-par plastics didn't help the first impression. It undoubtedly improved over time, but certainly took some getting used to.

This final Macan interior is a marked improvement. A bigger display has been present for a while, but the quality of Porsche's latest touchscreens means just the most vital buttons feature below it, usefully decluttering that bit of the dash. The Panamera-style glass layout for the rest is also a success, removing the ugly blank switches and allowing for extra storage as well. The haptic feedback is responsive, too. The 911-like knurled ventilation controls are also a lot more satisfying to use than the old system. All this, while keeping analogue instrument dials as well - hurrah.

It makes for a really good interior overhaul, noticeably improving a cabin that wasn't without merit before, most notably for its well sorted driving position. A few might be upset that manual mode for the PDK now requires a button press on the wheel rather than a nudge of the gear lever but, honestly, that's about it (because the red vents are optional, don't worry). Anyone making the decision between this and a Stelvio Quadrifoglio is going to be sorely disappointed by the Alfa if they get to that interior second.

Given the internal combustion engine isn't long for the Macan, its presence is more keenly felt in this final version. The 2.9-litre twin-turbo has always suited the Porsche well, torquey yet enthusiastic, refined as required but with a feisty side as well. It's nice to experience it once more, for what might well be the last time. It's willing from little more than idle, but really gets in its stride from a little more than 2,000rpm; peak power is there at 5,700 but is maintained to 6,700rpm, so even if it doesn't rip around to the limiter quite like a Stelvio, there's certainly an appetite for revs.

The way it snarls and rasps as 7,000rpm approaches is arguably more appealing than the 911's turbocharged flat six, though that might just be the fear talking with battery power imminent. The dual-clutch PDK, as always, is the perfect partner for the V6, much more so than the auto found in the Audis because it doesn't sacrifice any smoothness for its ferociously fast and unerringly responsive shifts. For what it's worth, Porsche says a Macan GTS like this one, with the Sport Chrono, is capable of 0-62mph in 4.3 seconds and 0-99mph (160kph) in 10.5 seconds, before reaching 169mph. You'll never feel the need to go any quicker.

Porsche has tinkered underneath the GTS as well, with standard sport air suspension that's lower and stiffer than before. Which, quite frankly, doesn't sound like a smart move, especially not with 21-inch wheels fitted to this car. It's only when you look at the spec, in fact, that you'll see the no-cost-option for 'Normal Adaptive Air Suspension instead of GTS Sports Air Suspension (-10mm)' and realise Porsche might think so, too - this must be the better compromise. If not quite as plush as an F-Pace or as supple as a Stelvio, the Macan remains more than comfortable enough in everyday situations. In fact, as is often the way with Porsches that have adjustable suspension, the Comfort setting works as a great catch-all for pretty much every scenario. Sport is there to just sharpen things up a tad, tensing the dampers and increasing the poise further without ruining the ride, but hardly seems worth it given how well the softer setting delivers. Predictably, Sport Plus is busy and of no real benefit on the road.

The Macan remains a standout prospect because it drives how all the best cars do - i.e. satisfyingly and in a manner that feels cohesive no matter what speed is displayed. No one dynamic element stands out because they're all working in gratifying sync with every other. The steering is better than can be found in a lot of sports cars, with near perfect feel and response, the four-wheel drive always apportions power to the right place to make it feel nimble, and the brakes inspire huge confidence, the pedal firm and the car resolutely composed.

Perhaps the GTS isn't as flamboyant as a Stelvio, though it remains immensely enjoyable in a more subtle way. Crucially, too, it's better than before as well: the chassis is ever so slightly more engaging than the one which featured beneath the Turbo, with the newly introduced power and torque complementing (rather than compromising) that enjoyment. Both GTS and Turbo were good before, be in doubt, but this feels like the best driving Macan yet.

Which, combined with the interior improvements (if not the exterior ones), ensures that the Macan will go out of production as competitive as when it was launched. Probably more so. Familiar gripes remain - this is hardly the most commodious SUV in the world, and an £85k as tested price is startling - but it would have been daft to expect drastic changes for the final model year facelift. The Macan's prodigiously strong residuals will likely help take the sting out of that initial asking price. And no matter how capable the next Macan turns out to be, it'll be going some to offer a more complete SUV package than this car. A Stelvio Quadrifoglio remains the more interesting choice for drivers, but in this iteration the Macan GTS is more broadly accomplished than ever. Just maybe get a black one.