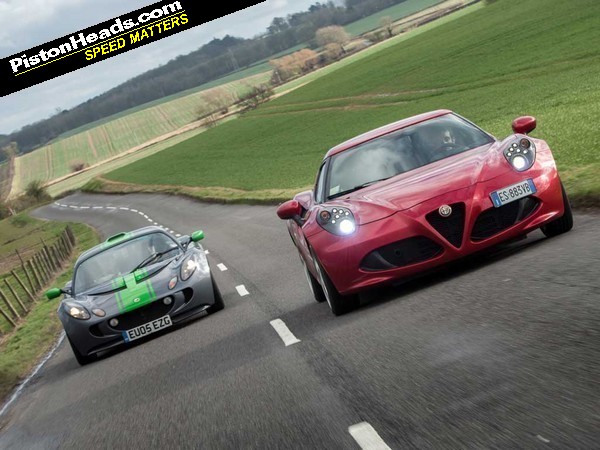 Comparing new to used is a classic trap. And we’d scoff at anyone who falls into it. Well, until chance paired an S2 Lotus Exige against

we had in recently.

We’ll avoid the financial considerations in this comparison and look instead at the philosophical and engineering ones. There is a new Lotus Exige you could have for similar money to the £53,470 of our Alfa test car. But that car is now a rather different proposition, and a significantly more potent one with its 350hp supercharged V6. 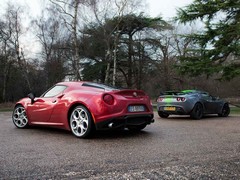 Instead consider this an exploration of an evolutionary step. The step where a small, lightweight sports car using a transverse front-wheel drive powertrain transplanted to a mid-mounted, rear-drive configuration attempts to prove that a ‘supercar’ need not have 500hp-plus and a six-figure price tag.

Carbon dating
The big news here of course is Alfa Romeo offering a carbon fibre tubbed, mid-engined sports car at a price point roughly a third of what you might expect. Any fundamental similarities with the old four-cylinder Exige and Elises are suddenly eclipsed, even if the Lotus tub weighs pretty much the same and has proper double wishbone suspension bolted to it rather than the Alfa’s much discussed ‘adapted’ MacPherson strut rear set-up.

Even so it’s something of a coup, and inspires Alfa’s claim that the 4C is a genuine supercar for the modern age – light, cost effective and with performance more relevant to the public road. A genuine step on from what the Elise and Exige have offered for nearly two decades? Or marketing hype sold on the snake oil promise of carbon mysticism? 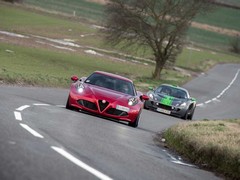 Both should be in their element here - one is

in engineering the 4C to its price point they’re well hidden on first encounter. Few would mistake it for a car in the league of a 458 or 12C but it’s several times more exotic than anything built on that Lotus tub, as the range of reactions (iPhones and thumbs up from the pavement, ‘coffee beans’ from passing van drivers) proves.

Old and new
In the flesh the 4C is genuinely dramatic, a proper event car. Inside the exposed carbon sills bring the bling and distract from some cheap matt black plastics and generic Fiat switchgear. Here the Lotus scores its first hit though; it’s utterly unapologetic in its minimalism. The Alfa feels like it started along the same path before someone bottled it and threw some Alcantara and red stitching at it in an attempt to look luxurious. 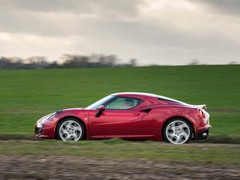 It’s an illusion that doesn’t last long. In the rawness stakes the Alfa is closer to the Elise family than most of us – raised on a pre-launch diet of

– expected. Those upgrading from TTs or side-stepping from Porsches are in for a shock - from the first heave on the non-assisted steering wheel to the uncultured blare of the turbocharged four and choppy low-speed ride the Alfa does little to pander to the mainstream.

But that’s a good thing for the likes of us, right?

Chest wig
Forget the ‘now’ technology like the carbon tub, direct-injected turbo engine and dual clutch gearbox for a minute and the 4C is a bit like a re-imagination of the late 70s/early 80s Italian supercar. Think of it as a modern-day Ferrari 208 GTB Turbo perhaps. It’s a similar size and power. You sit a bit skew-whiff and the steering is really heavy at parking speeds, kicks back violently on bumpy roads and there’s a hint of menace in the on-limit behaviour that keeps your pulse rate racing. 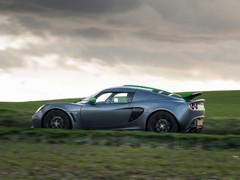 Buzzy atmo four-cyl and manual for the Lotus

But it’s also defiantly modern. The power delivery is very contemporary, dumping everything in your lap before the rev counter has even passed 2,000rpm; the flat tone overlayed with hissing induction and cooing dump valve for a sensation half way between a Smart Roadster and a McLaren 12C. Of course, just where the 12C would be taking off into the stratosphere the Alfa’s 240hp is starting to run out of puff. It’s deceptive – you expect it to keep pulling as hard as it does from low speeds but there’s only so far 1,742cc and four cylinders can get you.

Feedback? Fightback…
Harris hinted at some issues with our 4C test car, an Italian market model running the optional 18/19-inch wheels and stiffer suspension included in the optional £3,000 Racing Pack. If you’re going to use your 4C on UK roads we’d advise thinking carefully before ticking that particular box, the springs and dampers nicely matched but the wheel/tyre combination seemingly resulting in significant camber sensitivity on bumpy British roads.

You may hail the idea of non-assisted steering and unadulterated feedback but careful what you wish for – the Alfa’s communication is less nuanced information about road surface and grip levels than hysterical shouting and screaming. Insert Italian national stereotyping here. It may seem petty but that (thankfully optional) steering wheel is a tactile as well as an aesthetic disaster. As your point of contact it’s an ugly metaphor for the disappointing lack of subtlety in the driving experience.

Drive the Exige along the same stretch of road and, yes, the wheel wriggles and writhes in your hand but it’s less shouting match than confidence inspiring discussion. You feel the cambers and surface changes through your palms and backside but it’s correctly pitched and never cries wolf about what's going on. 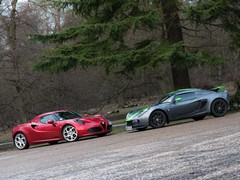 4C not far off Exige in terms of rawness

The Alfa’s other significant problem is with the power delivery of its turbocharged engine. Everything in the Lotus is linear and predictable; talk to Lotus handling guys

and you'll hear them talk about balancing steering angle and roll rate to inspire confidence and on-limit transparency. The Toyota engine really has to be screaming to make any reasonable progress but that’s OK because if you’ve committed to that you’ll be primed and ready with the necessary inputs.

But as you battle the Alfa's writhing steering wheel, information about the road surface drowned out by white noise, you also have the issue of power delivery that overwhelms any sense of balance. In the Exige lock comes off as power goes in, every action having a harmoniously equal and opposite reaction. Power just builds, builds, builds all the way to an intense 8,000rpm crescendo but does so progressively. In the Alfa you try to carefully ease the throttle and it suddenly all arrives in one violently boosted dollop, which either pushes the nose wide or, in the wet, can snap the rear axle violently sideways. And at the point where the Alfa’s engine is all done the Exige is just about coming good.

There must be a sweet spot in the 4C’s cornering stance where neutrality edges into mild oversteer but the on-off power delivery means it’s devilishly hard to pinpoint and even trickier to exploit. Where the Lotus flows the 4C rages and stutters, never quite settled or comfortable. Things improve considerably on wider, smoother roads but at that point the Alfa’s relative lack of top-end performance compared with ‘proper’ supercars feels more telling. Overall it feels disappointingly heavy-handed and blunt for a car supposedly trading on its sub-tonne (dry) kerbweight and the agility that should imbue. Another reason to look forward to trying the UK press cars with the promised smaller wheels and standard suspension. 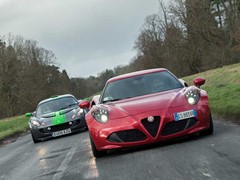 Lotus a bigger sight in 4C mirrors than expected

Flick of the wrist

This far and no philosophical hand wringing about the Alfa’s paddle shift only transmission. In truth it’s a done deal and the Alfa is from the modern age where the vast majority of the target audience demand paddles. Just a shame that they’re such flimsy plastic affairs. And yet the pedals are beautifully machined aluminium, indicative of a slightly schizophrenic attention to detail.

This sounds like a comprehensive drubbing for the Alfa but it shouldn’t really be considered that. The issues described are all in the final calibration and set-up. A bit softer in springing, less rubber on the road and more in the sidewalls, a more progressive power delivery and perhaps some fettling with the steering geometry and the 4C could play much better to the strengths its stiff and light carbon foundations offer. It’s not a six-figure supercar so why play the half-price imitation?

The 4C's sense of glamour gives it an opportunity for mainstream acceptance the Exige, with its overt racer overtones, always lacked. As it stands it’s the car to be seen in and an impressive democratisation of technology previously reserved only for the elite. Shifting the supercar debate away from raw power and to performance through weight saving is also to be applauded. In many ways, yes, it moves the game on. But in terms of a great driving experience a secondhand Lotus would remain our choice for now.

[Sources and credits: Ferrari.com, thanks to Lotus owner John Tighe, photos by PrimeExposures]