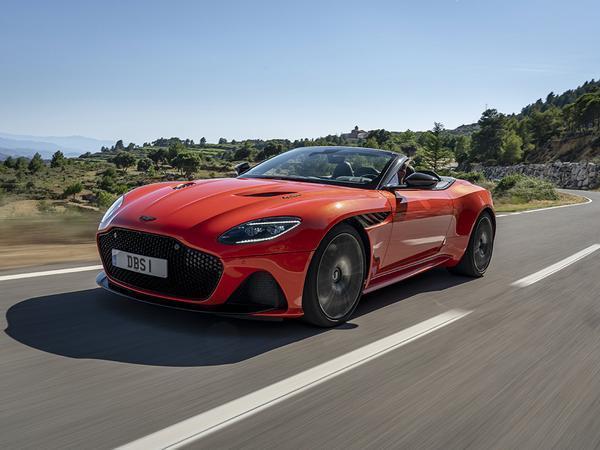 The fact that the DBS Superleggera Volante can manage 211mph flat-out probably isn’t much of a revelation. It does have 715hp after all, the same as its Coupe sister, so despite hauling an extra 100kg of mass there’s little surprise it can deliver the same top speed. More startling is Aston’s claim that it can achieve that figure with the roof either up or down; can you imagine how breezy it must have been during the open-top validation run? Oh, and Aston’s chief development engineer, the always-quotable Matt Becker, suggests the top speed is slightly pessimistic: he says his team saw 215mph during testing.

That’s quick enough to make the DBS Superleggera Volante the fastest production soft-top in the world, and although that is unlikely to be at the top of many buyer’s list of priorities, it does show how seriously Aston has taken engineering what is currently it’s range-topping non-limited model in terms of price.

The DBS Volante has a fine line to tread, one between two excellent and closely related alternatives. It has to offer a comparably exciting driving experience to the DBS Coupe, despite being fatter and surrendering some torsional rigidity through its decapitation. But it also has to persuade buyers to pay a substantial premium over the existing DB11 Volante that already offers more laid-back open-topped thrills. Sure, the DB11 is only available with the AMG-sourced V8, but it’s also £87,000 cheaper.

Power is as plentiful as the stats suggest, but the DBS Volante finds it harder to deliver on the Superleggera part of its title. To be pedantic the Italian expression “superlight” was originally used to describe the construction technique developed by Touring of Milan, and isn’t a promise of a svelte kerbweight. That’s just as well because, despite its aluminium shell and carbon bodywork, the DBS Volante tips the scales at 1,863kg. That’s lighter than the compact planet which is a Bentley Continental GT, but it’s still not exactly ‘leggera’.

It doesn’t really matter, as the turbo V12 has little time for distractions like Newtonian physics. On Aston’s numbers it can run from 0-62mph in 3.5 seconds – just a tenth behind the DBS Coupe – and will blast its way from rest to 100mph in a scarcely credible 6.7-seconds; just three tenths slower than the metal-roofed version.

Those numbers feel entirely feasible from the driver’s seat. The full-fat version of Aston’s blown V12 manages to make all the lesser versions seem a bit feeble. There’s enormous urge everywhere, with huge torque from little more than idle, a snarling mid-range and a truly brutal top end. Stamp the throttle and the DBS delivers acceleration that gets close to being physically uncomfortable. Passengers will squeal; drivers might too.

Aston chose to launch the DBS Volante on a route consisting mostly of Spanish mountain roads, many of which seemed to have been constructed by crews paid for the number of corners they could fit in per kilometre. Yet even on the shortest straights the Superleggera can deliver credibility threatening speeds. Fortunately, standard fit carbon-ceramic brakes do an equally good job of hauling the velocity off.

While the DBS’s chassis coped well with the all-bend diet of the early part of the drive, there was no doubt that it would rather be devouring something straighter. The Volante does a fine job of disguising its weight in corners, with impressive resistance to understeer in the sort of hairpins that send most obvious alternatives squealing towards verges. But the car’s physical size limits confidence on narrower roads, especially as the view from the steering wheel doesn't show just how much width it is carrying in its haunches.

It takes wider, faster roads to turn it truly special. Both powertrain and suspension can be cycled through different modes using switches on the steering wheel, and in the gentlest GT mode, with dampers full soft, the DBS is a supreme schlepper. The suspension is maybe a little easy-going over broken surfaces, cured by selecting Sport for the dampers, but the engine's bass-heavy exhaust note sounds great at a cruise. Roof-up refinement is good, if not quite up to the standards of whisper-quiet rivals like the Mercedes S-Class cabrio, and with the roof down a pop-in deflector screen limits buffeting at what might be termed legalish speeds.

Selecting Sport or Sport Plus modes sees the DBS slide off the velvet glove and become mostly fist. The exhaust note grows harder-edged and gains some pops and bangs, throttle and steering get sharper and the eight-speed autobox starts delivering impressively crisp downshifts under much less provocation. It's not quite the level of transformation that Mercedes manages in its AMG models, but it's not far off - and although there's little doubt that the Volante is a GT rather than a sportscar, it gets much closer to the line that divides those two categories than most of the alternatives.

There's more than enough low-down torque to be silly if you want to; even dry, grippy Spanish tarmac kept the stability control working overtime. Switch this off, or select the more permissive Sport mode, and the V12 can be made to overwhelm the grip of the rear tyres pretty much regardless of speed. But the Volante is happier playing gentleman than thug, travelling at serious speed while barely breaking a sweat, making nice noises and delivering a leathery sun tan as it does so.

Is it as good as the Coupe? Dynamically, no - the extra mass adds inertia and, although impressively rigid, the open bodyshell can't match the strength of the one with the roof. It's also £27,500 more expensive, which is the sort of supplement that a typical DBS buyer could certainly think of several other uses for. But is it a wrong choice? Categorically not - the fastest soft-top in the world might also be the best.