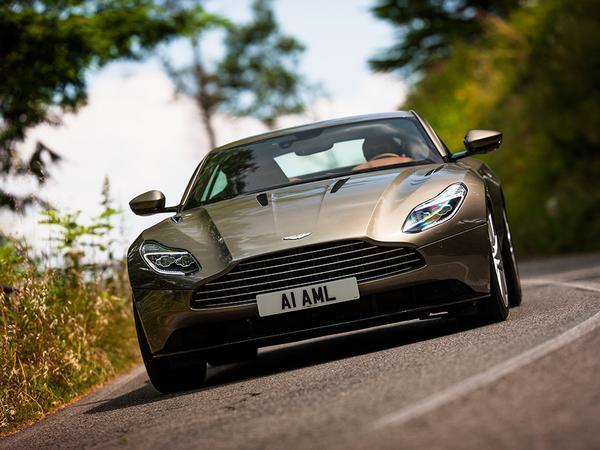 More things change, more they stay the same as the saying goes. And seemingly appropriate to introduce one of those periodic upheavals Aston Martin goes through every decade or so. Because

is exactly that. This is the first decisive break from the

'methodology' that's underpinned the entire Aston Martin range since the early 2000s. It's the introduction of turbocharged engines to a mainstream model, even if this forced induction V12 is all its own work and not a product of the partnership with Daimler and AMG. And it's the first serious attempt to move on from the DB9-era design language and take the established Aston Martin styling cues into a new age.

No small job. And much to talk about as a result, the adoption of turbocharging just one of many discussion points to pick up on. 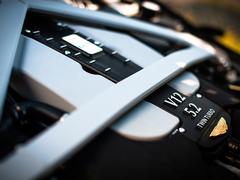 Heart of the matter

But it's among the more emotive ones. So let's start there, soul-searching following an iconic performance car doing turbo and downsized a recurring theme of the last few years. Downsizing is a relative term for Aston Martin though - this is still a 5.2-litre engine with 12 cylinders, so hardly lacking in natural firepower. Headlines are 608hp and 516lb ft, up from 547hp and 457lb ft in the outgoing

. With a decent swept capacity to fall back on the turbos are carrying less of the load, meaning Aston Martin has an easier time of it maintaining the kind of throttle response and character we know and love from the previous V12. The noise is good too, that throaty gargle familiar from the old engine while the turbocharging gives meat to the mid-range never present before. It'll haul from high gears, it'll rev out and make loads of noise. There is, on this first encounter, little to fear from Aston Martin's adoption of forced induction.

The new architecture uses more aluminium pressings than extrusions like the VH cars but sticks with the bonding process and is scalable for use in other models down the line. The new structure frees up interior space - the back seats are not far off 911-size and actually usable - and is stiffer and lighter, saving 39kg. This is still a heavy car though, Aston quoting nearly 1,800kg dry - on terms with the DB9 despite all the extra turbocharging gubbins.

As such even 600hp has to work for its lunch, the DB11 quick but perhaps lacking the lunatic punch of a 911 Turbo S or Bentley's muscular V8s and W12s. As such it's not such a huge leap from the 6.0 as you might imagine, the engine working best with some revs. Bottom line improvements are significant though - 3.9 seconds to 62mph over the 4.6 of a DB9 GT and a bona fide 200mph top speed. 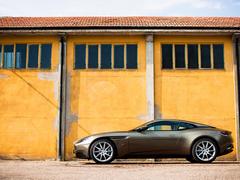 It's a more stylish package in the metal

60mm extra between the wheels means the whole engine is now behind the front axle with the transmission housed in a transaxle to keep all the heavy bits within the wheelbase - Aston is still the only manufacturer to use such an arrangement with the familiar (if uprated) ZF eight-speed auto.

On the road it shows too. This is a big, heavy car but by containing the weight within the axles new dynamics boss Matt Becker has a fundamentally balanced package on which to work his Lotus-honed skills. This is a huge advantage, meaning the DB11 has less need to lean on electronic intervention and can instead focus on feedback and flow.

This is the first Aston Martin to use electric power steering and, though there's less weight and feel than the old system, it's 'clean', quick and consistent. The three-stage Adaptive Dampers are from Bilstein and have been tuned to make all modes usable through the GT, Sport and Sport Plus settings. These three modes also apply to the engine, gearbox, torque vectoring by braking and other parameters, albeit independently from the suspension. So you can have Sport Plus powertrain but GT damping, should you so wish. The buttons for this are on the spokes of the steering wheel and easily reached but, as ever, it's a bit of a faff switching about constantly and you inevitably end up using Sport for both as the best all-round compromise. 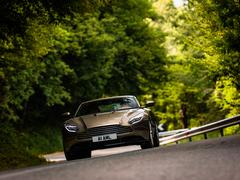 Saying that there is an appreciable difference when in GT, the DB11 proving impressively comfortable, quiet and refined in this mode. Italian roads aren't always the smoothest but even when the surface gets choppy the DB11 has a lovely sense of float without ever feeling wallowy. Big distances at big speeds in this car are going to be very easy. In GT it'll even shut down a whole bank of cylinders to save fuel, imperceptibly swapping back and forth every 20-30 seconds to keep the cats warm.

Step up
And when things do get a little more involved there's a real transformation as you progress through the settings. The exhaust gets more vocal, the throttle more eager and the previously smooth gearshifts more decisive. Chunky aluminium paddles encourage use of the crisp manual override if you like but the mapping in auto is intuitive, neatly shifting down through the gears to stabilise the car into the corners. You never lose sense of the size on narrower roads but that balanced weight distribution makes the DB11 feel far more nimble than the numbers suggest it should. Astons have never been sloppy in this regard but there's a harmony in the way steering angle influences roll and other factors familiar from Becker's previous work. And a lovely neutral balance on turn-in that bleeds into deliciously readable oversteer if you've managed to navigate the menus and turn the ESC into its relaxed mid-way setting. Or off completely.

Sounds like typical motoring hack bravado but it's actually a very natural and accessible handling balance, the mechanical limited-slip diff and brake controlled torque vectoring contriving a well communicated rotation you can enjoy as subtly a relaxation of the muscles in your forearms. Or more heroic arm twirling, as dictated by boldness on the throttle. 600hp-plus in a rear-driven car has never felt less intimidating or more empowering. And across the board it is properly, properly fast. 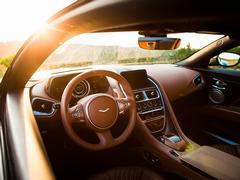 You have to really go nit-picking to find fault in the overall calibration, a slight snatchiness coming off the throttle and over-sensitive brake pedal making for head-nodding progress until you adapt.

So it goes well. In the metal it also looks spectacular, and much more convincing than it did in the first batch of photos. Interestingly for the launch cars Aston Martin has backed away from the contrasting roof rail look the car was unveiled with, body-coloured pillars toning down the 'floating roof' look created by the split C-pillar. The personalisation options are there if you want them and the design has a functional purpose, with air sucked into vents and bled out of the bootlid to help airflow and improve downforce. At speed a small Gurney flap emerges to increase stability, the system described as Aeroblade.

Giving vent
Those prominent side vents are now more than styling features too, with high pressure air bled out of the arches and swirled by the wavy profile under the chunky aluminium strakes. Lift that huge, forward-hinged clamshell bonnet for a sense of how it works. But this engineering substance adds credibility to a bold new style that remains faithful to the fundamentals of Aston Martin's established design language.

Same goes for the interior. It's perhaps more conventional than the DB9 and Vanquish, though brogue-like detailing to the leather in these expensively upgraded Launch Edition cars blends tradition with a distinctly modern feel. The Mercedes donated nav and infotainment interface is sympathetically integrated too and functionally miles better than anything we've had in recent Aston Martins. Visibility isn't great from the low-slung seating position and narrow glasshouse, but in all other respects it's a winning blend of style and function. And another decisive break from the recent past. 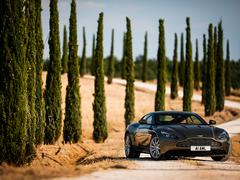 In pricing as well as character the DB11 sits neatly between the 911 Turbo's everyday supercar vibe and the more wafty, fast GT offering of the Continental GT or AMG versions of the

. The air of confidence in the Aston Martin team is well-placed too. This is a big enough break from the past to answer criticisms of being forever tied to the DB9 and its VH derivatives, both technically and stylistically. But it's faithful enough to the look and feel of those cars not to scare off existing fans. That's a tricky path to navigate but one the DB11 manages with considerable swagger. Grown up and mature but with just enough of the machismo and caddish Aston Martin attitude to keep things interesting, the brand's 'Second Century' plans look to have solid foundations. Jolly good show chaps.