It's faster than ever, but is the new 911 Turbo any more fun?

Everyone knows the transition to

has been a significant step change for the 911, what with the 50 years of atmospheric flat sixes to follow. The job is of course much easier for the

because it was already, well, a 911 Turbo. But although there's inevitably less focus on this part of the newly refreshed 911 range, the Turbo updates are by no means minor. 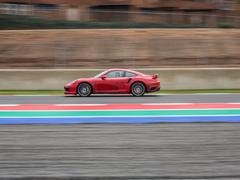 Matt keeping a look out for the puddles...

We'll focus here on the Turbo S, which outsells the 911 Turbo by two to one in the UK. It is now a 205mph car thanks to new turbos and 580hp, a figure that can't have been simply plucked from thin air when you think of the

. Porsche also claims a phenomenal 0-62mph time of 2.9 seconds, a figure stated in the press conference as "conservative". There's also a 'dynamic boost function', which interrupts the fuel injection but keeps the throttle valves open for small lifts off the accelerator, the logic being that response is more urgent once you're back on the gas. This on top of improved fuel consumption, now officially 31mpg.

Our first experience of the new Turbo S is at Kyalami, the Johannesburg track recently purchased by Porsche South Africa and in the process of being made into a full FIA racing facility again. It's a ballsy circuit with some really, really committed corners, so the familiarisation laps in Carrera 4 Cabriolets are welcome. Less so are the streams running across the track on certain corners thanks to overnight rain and some drainage work left to do before a May opening. So that's a 580hp car on a fast circuit with freshly laid, greasy tarmac and a few patches of standing water too.

The driver assists can stay on for now... 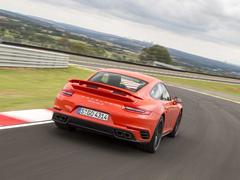 Lava Orange from the GT3 RS a new option

The conditions should be convenient test for the new PSM Sport mode though, which Porsche says "makes it possible to approach performance limits even more closely." Given time on track is fairly limited, the first lap is completed with PSM and the powertrain in Sport. Then it's a case of hold on tight and follow one of Porsche's motorsport hotshots out front.

You may think otherwise, but it's a relief to not have any video equipment running on the run down to the first corner. Despite recent experience of the outgoing Turbo S and the vast expanse of racetrack around us, the car feels ballistically quick. Which I can only comprehend in a string of expletives. That 2.9-second sprint will be the headline figure, but it's the way the Turbo S piles on speed in third, fourth and fifth at any revs that really staggers. As for the dynamic boost function, it would be a lie to say there was a discernible difference at any point.

Now the modern Turbo has always had a reputation as a rather anodyne 911, and certainly a GT3 RS would be more thrilling around Kyalami, but there's real fun to be had in this new one. Sport is swapped for Sport Plus for the remaining laps and with confidence comes a bit more commitment as well. With too much power on exit or an overambitious entry speed, it will understeer and there's not a great deal to be done about it. However, get the braking right on the way into a bend and you can just sense the nose locking onto the apex, that mass at the rear aiding turn-in too and the car ready to cannon out of the bend.

This is not some wild 911 'backing it in' fantasy, and in reality it's a subtle movement, but it's nice to see the newest, fastest production 911 not entirely deserting its roots. That you have to work at corner entry to get it right makes this all the more rewarding, and this is within the threshold of that PSM Sport mode. As for the wet braking zones, let's just say there were a few more expletives as the car shimmied its way towards a turn-in point... 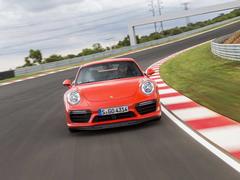 Far better on track than you may think

Our time on the road with the Turbo S is brief also, and not helped by a storm that reduces visibility to virtually zero. Interestingly given the progress of modern 911s, the fact that it's not the most tactile and engaging on the road seems less of an issue than ever; when was the last time a 911 was sold with steering that picked out every camber and the driver had to work with the weight balance? Exactly.

Instead it feels - you've guessed it - like a jolly fast and thoroughly well engineered sports car, from the weight of the pedals to the thunk of the doors. The new GT sport steering wheel is a welcome addition too, great to hold and nicely sized. But it's very much business as usual for the Turbo on the road, even in rain that made the storm in Wales look like a bit of drizzle.

That idea of 'business as usual' is a recurring theme for the Turbo facelift. This is not the car to change the minds of those who don't really get the 'uber 911' (and that's Porsche's name for it). Instead the facelift comprises some subtle but worthwhile upgrades that tangibly if subtly improve an already very good car. For something to go shopping in, pack the boot full of remote controlled cars or monster most comers on a track day, there's little other than a GT-R to rival it. That being said, if you can sacrifice the practicality and the all-weather speed the McLaren 570S remains a more engaging and exciting sports car for the same sort of money.