The DB9's valedictory salute, and a fairly excellent one at that

The very definition of the gift that keeps giving, the Aston Martin DB9 stands as a pioneer of the 'modern' Gaydon-era Astons built on the Vertical Horizontal engineering methodology.

. They get a bit sniffy when you use that word.

We've been writing about the DB9 on PistonHeads since 2004, a year after the car was launched at the Frankfurt show. There was a big enough update in 2012 for Aston Martin to call it the 'new DB9' as part of a rationalisation of the product portfolio but, essentially, the car has remained the same and at the heart of the model range. Not for long though. The DB11 is an increasingly frequent sight in front of the spy photographers, looking closer to production spec each time. Turbos are coming, the DB9's replacement perhaps fittingly the start of the AMG-Aston era.

No gig would be complete without an encore though and so the DB9 GT aims to send the old stager out in style. As pointed out in our news story the GT did the same for the DB7 when its time came and was an absolute corker. Here's hoping for the same with this run-out megamix... 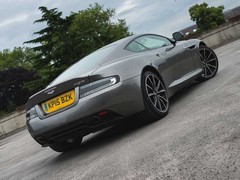 Credit to the original design too because there aren't many 12-year-old cars that still carry off looking good this late into their careers. Aston's design language has taken a turn for the assertive compared with the restrained elegance of the initial DB9 and a supply deal with Kahn to turn a limited number into its extrovert and

shows interest in exploring this further.

But the GT is true to the DB9's more elegant foundations and adds just a little garnish in the form of black-painted splitter and diffuser, new 10-spoke wheels, 'revised' front and rear lights (apparently) and - perhaps more significantly - Aston Martin's AMI II control interface. Introduced on the Vanquish, this finally replaces the stylish but desperately fiddly 80s hi-fi style centre console the DB9 has used from the start. Big rotary dials, haptic heating controls and a cleaner look make it both more stylish and easier to use. The nav graphics are still a bit ZX Spectrum but as a whole it does at least feel of the modern era.

Then there's the engine. It's still the familiar AM11 6.0-litre V12 at heart but with 547hp the GT is the most powerful DB9 yet, 40hp more potent than the facelifted model and not far off 100hp up on the original car. In this age of turbo downsizing it remains a standout feature and while the forced induction V8s in rivals like the Bentley Continental GT S and Mercedes S63 Coupe punch harder from lower revs you'll forgive much simply for the character and experience. 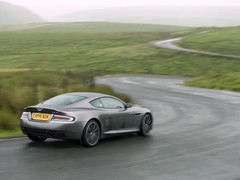 And, let's face it, it's hardly under-endowed. There's 457lb ft of torque to play with, even if you have to wait until 5,500rpm to get it. But the noise it makes doing it is just fabulous. Slide that 'key' into the slot, hold it just a tad longer than you think you ought if you don't want it spat back out and the whirr of the starter before the big V12 catches and fires is pure theatre. In a good way. This is a proper engine, smooth and refined but with just enough of a harsh, mechanical edge to remind you it's a bit different from everything else out there. It's just one of many features of the DB9 that still, after all these years, will put a little involuntary grin on your face each time you fire it up. And, hell, isn't that the kind of thing you want out of an Aston Martin?

The interior is still absolutely gorgeous too. 'Bronze Metallic Contemporary Leather', 'Copper fine thread' and 'Flint' silver seatbelts all sound pretentious on the options sheet and between them add £1,785 to the £140,000 starting price. But the combined effect is just lovely and the style, touch and smell of the GT's cabin is uniquely evocative. It's a lovely place to spend time, basically.

Are the updates enough to make it feel more contemporary on the road though? The long travel throttle pedal and linear power delivery exacerbate the sense that for all the impressive numbers the DB9 is true to its GT role and less angry and explosive than the Vanquish or Vantage. That's fine, and once up to speed it just keeps going and going, the faint gargle taking on a more aggressive tone and the numbers getting serious very quickly. 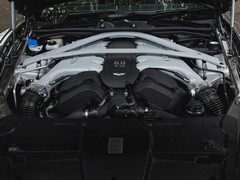 This old lump still a big part of the appeal

The GT has Aston's three-stage ADS dampers but, truth be told, isn't what you'd call plush in any of the settings. If you want a more soothing, isolating GT experience you're probably better off with that S-Class Coupe or even a Continental GT. Likewise the steering, which is firmer, sharper and way more communicative than anything in more modern rivals. In case you're in doubt this is a good thing, the hydraulically assisted system's feedback - like the V12 - a reminder of what we're losing in the name of progress. This is old-school, but in a good way.

Not sure the same can be said of the gearbox though, the rest of the Aston range having ditched the six-speed Touchtronic automatic and gone to the snappier and more up to date eight-speeder. The breadth of the power delivery means you're happier holding ratios longer than you would in 'modern' turbocharged car but when you do come to change it's either a traditional slurred auto shift or a languid response to the paddle. The styling, performance and cabin all manage to carry off maturity as something positive and to be savoured; in comparison the transmission just feels old-fashioned.

Overall the clue is in the name; although seriously rapid by any stretch of the imagination the DB9 GT isn't about bare knuckle combat with back roads and race tracks. It's at the sportier end of the GT spectrum for sure, but it's a car for making progress with just the occasional foray into the rortier end of the V12's performance envelope to prick the hairs on your neck when required. And it - still - passes the test of being the kind of car you can't resist turning to look over your shoulder at as you walk away from it. If this is the DB9's swansong it's a fitting one.