You can now buy the 450hp RS5 Sportback in the UK - question is, should you? 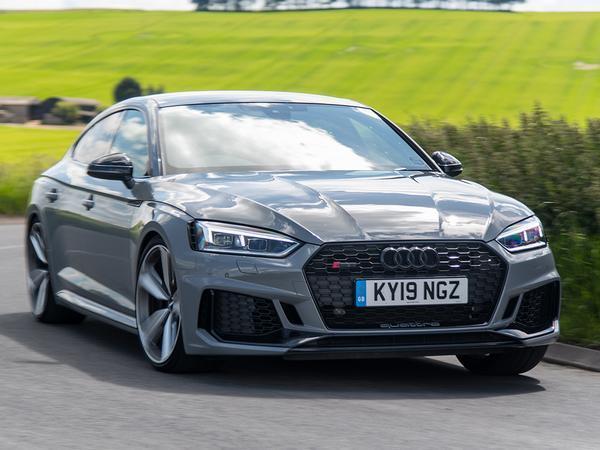 Since it switched to a twin-turbocharged V6 in 2017, the Audi RS5 has failed to captivate us in quite the same way its V8-powered predecessors did. Effortlessly rapid, good-looking and brimming with tech, the present-day model most certainly is. But exciting to drive? Not when its rivals include the Mercedes-AMG C63 coupe and the BMW M4. Now, though, with the launch of the Sportback in the UK - a roomier, five-door take on the 450hp RS5 theme - there's an additional opportunity for the model to finally evolve into an exciting RennSport distance shrinker, potentially one with a wider talent bandwidth than the competition.

Moreover, in 2019, the RS5 Sportback can claim to be an exclusive option choice given that just 250 examples are being made (there'll be 250 coupes for 2019 as well), before the car is briefly pulled out of production to be WLTP-ified. It's available exclusively in higher-spec Sport Edition trim, too, so all cars come with 20-inch anthracite alloy wheels, tinted glass and lots of black trim, as well as the more vocal Audi Sport exhaust system. Inside, the manufacturer's still impressive and functional Virtual Cockpit cabin comes finished with Nappa leather and Alcantara trimmings, contrasting diamond stitching on a pair of RS Super Sports seats and a panoramic glass sunroof. In its class, it's second to none.

Naturally, the addition of two doors behind the centre line and space for up 1,300 litres of luggage means that the RS5 Sportback is 35kg heavier than the coupe at 1,720kg. But Audi claims that there's been no measurable impact on straight-line performance; the 443lb ft made available by the 2.9-litre V6 still sprinting the RS5 from 0 to 62mph in 3.9 seconds - which, conveniently, is identical to the C63 saloon and Alfa Romeo Giulia QF - and onto a limited top speed of 155mph. Key to the motor's elasticity is the arrival of that maximum twist from 1,900rpm and peak power at 5,700rpm, giving the eight-speed Tiptronic gearbox a lighter workload.

With the powertrain set to Comfort mode, two of the four exhaust exits (there are two smaller tips inside those wide-bore surrounds) are blanked off with valves so the V6 is hushed and hunkered down behind its vast reserves of torque. From behind the wheel, you could easily forget you're in something of the RS variety - which perhaps gives the Audi a USP over its louder, more permanently brash rivals. At low pace in town, the ride is good over large bumps like sleeping policemen, but a little busy over cracks and drain covers, most probably because of the thinness of the rubber wrapped around the 20-inch wheels.

Our test car didn't come with the optional Dynamic Chassis Control hardware, so switching to Dynamic mode on a country route has no effect on the damping rates. The engine and gearbox, on the other hand, sharpen up substantially, with the V6's volume also raising (presumably with acoustic help through the speakers) alongside the more bassy note exhaling through all four tips. The V6, which places its twin turbos between the cylinder banks to reduce lag, is so sweetly responsive that metering out the sound and fury is a pleasure. Inevitably, the engine can't match the thunder of AMG's V8, and it doesn't sound nearly as racey as Alfa's own V6. But its voice is certainly purposeful, especially when backed by subtle snaps and crackles from the exhaust as the quick-shifting gearbox briefly cuts the ignition.

On a warm summer afternoon, the quattro all-wheel drive system provides almost unbreakable traction so you're prevented from using the motor's tractability to exercise the sort of silliness the rear-wheel drive alternatives will permit. But the front end of the RS5 is so keen, even with the shift of weight distribution rearwards in the Sportback, that it feels completely neutral as you pitch it into a corner at speed. Follow that with a heavy dose of throttle and there's even a faint hint of rear slip, but it's quickly gathered up as the front axle tugs the car forward. Point-to-point pace is therefore very high, potentially higher than in the AMG and QF because of the straightness of the Audi's progress - but without any of the engagement or adjustability they put front and centre.

Even with its standard suspension the RS5 Sportback possesses very good lateral body control, although the heavy-duty thud sent through the struts on rough and lumpy surfaces emphasises the weight of those 20-inch wheels. The mass of the Sportback body also appears to give the shocks a pretty hard time over crests and dips, where it lifts and ducks and generally feels a little too loosely held, so you're encouraged to back off a little until the tarmac smooths out. Coupled with the familiar numbness of the RS5's steering, it demotivates any proper exploration of the car's limits and instead gives it the demeanour of a potent, if firm, grand tourer. Engage with it in this manner and the Sportback makes more sense.

It will give you more to applaud, too. After all, the car can carry four in comfort, five in relative comfort, has more maximum luggage space (with the seats down) than its rivals, is no more difficult to drive around town than a regular A5 and bridges a nice gap between being discreet and eye-catching. It's not even particularly thirsty if you behave. The problem, of course, is that in the place of an 'A' the Sportback gets an 'R' and an 'S' and those letters really ought to add up to something when you're in the mood for taking no prisoners - if for no other reason than because it's where the competition gets really, really interesting. For all its smarts, the Sportback's two extra doors still aren't enough to excuse it from this shortfall.