Not really a preview of the M2 CSL, but where's the harm in dreaming? 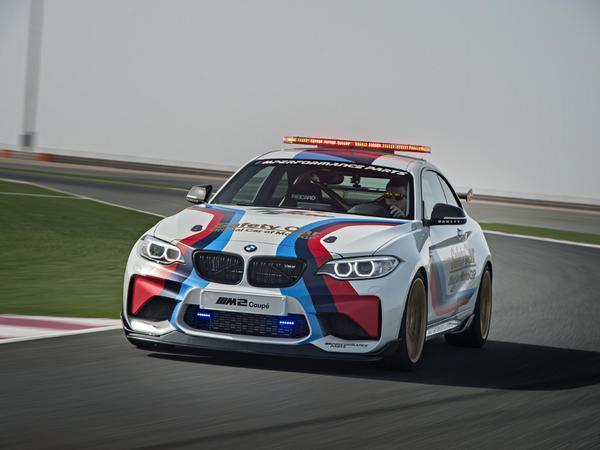 The drive of the M2 Safety Car took place over the Qatar Moto GP round on March 19/20. Originally scheduled for the evening of March 18, the drive was postponed due to a tragic accident in the Losail 600 Cup that night, where rider Taoufik Gattouchi lost his life. A shorter test was organised for the following day but, more significantly, it was deemed inappropriate to publish the review so soon after a motorsport fatality. Given some time has now passed, it seemed a more suitable time to share the story. (MB)

As BMW's mainstream products become ever more bewildering - 2 Series Gran Tourer xDrive, for example - so the M Division road and race cars become ever more alluring. The Competition Package appears to have addressed many of the M4's issues, the GTS transforms that car, and the M6 GT car is already doing very well in its maiden season. Now there's the M2 Safety Car. Yes, it's not for the road and, yes, it was only a very brief test, but who wouldn't want to drive a faster version of perhaps 2016's most exciting car?

Ostensibly the Safety Car uses the M Performance parts for the M2 to create a tangible (and therefore marketable) link between road and track. But that's codswallop really; good luck trying to find a half cage, Recaro buckets or carbon ceramic brakes on the options list. Or the flashy lights. Even the M Performance exhaust is "stripped down completely", so this isn't exactly representative of the road car.

In fact, that exhaust is as good a place to begin the assessment as any. BMW suggests reasonably enough that it has to be heard over a pack of 250hp racing bikes, so the noise is brutally loud, both inside and out. It's a fascinating cacophony of hard-edged straight-six induction shriek, turbo whoosh and exhaust histrionics. There's all sorts of other cars you can pick out in the noise too; the turbocharged Japanese straight sixes as it spools, a hint of the old six-cylinder M3s through the mid-range and parts that sound like a 12-cylinder too. 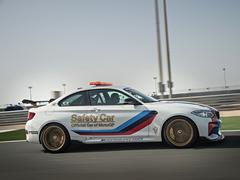 Gearchanges crack through and there's an angry blare every time the throttle is lifted, admonishing you for pussyfooting. Just once the exhaust gives a very old fashioned 'crackle, crackle, pop, pop... BANG!' and the grin still hasn't quite subsided. If the standard M Performance exhaust sounds a tenth as good as this, it's a must have option. Even with subsequent experience of the M4 GTS, it sounds immense. And I'm genuinely sorry there isn't a video, because it really is spectacular; keep an eye (and ear) on the MotoGP races for proof.

Unsurprisingly given the minor engine tweaks and small weight saving - the missing rear seats and racing front chairs are offset by the cage and the lights largely - the Safety Car feels about as fast as a normal M2. Which is to say pretty brisk, but certainly not terrifying on a circuit as wide as Losail.

Where it does feel tangibly different is under brakes, and through corners as well. Braking from 140mph down the blustery main straight to about 60mph for the first corner, the M2 is imperious; the combination of the ceramic brakes and Michelin Cup 2 tyres haul it up quickly and confidently, the stopping distance making your braking point look hopelessly pessimistic. Like the M4, the pedal perhaps isn't as firm as some would like, but there's no arguing with the performance. Could they be an option in future for the road car? It seems ambitious, but then nobody thought BMW would put an M3 GTS engine in a saloon either... 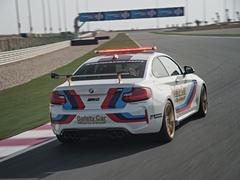 Up for the cup

The Michelin Pilot Sport Cup 2 tyre is making quite a name for itself in the performance car world, and this display on the M2 will only aid its reputation. Even on the standard Pilot Super Sport, the road car has a great resistance to understeer and a natural, progressive transition to oversteer. In this car, far from making it edgier and more intimidating, those characteristics have remained intact, despite the tyres making corner speeds higher still. Go in too fast - like getting the fourth gear right confused with the third gear right - and it will understeer, but the car is so responsive to a lift, and won't bite even with a panic brake mid-corner. It feels friendly and intuitive up to the limit, but without ever coming across as dull or desensitised.

And beyond that? It's superb actually, on the couple of occasions excitement overtook sense and the DSC went off. Out of the second gear turn six it makes even ham-fisted attempts at oversteer feel balletic, the rear progressively taking a wider arc than the front and the correction entirely intuitive, the slide only stopping as the engine wallops into the limiter. 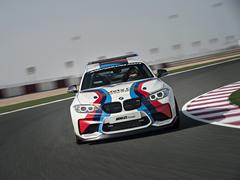 What else do you need to know? The M Performance wheel - about the only standard M Performance part on it - is great actually, with Alcantara where your hands rest and what feels like a thinner rim than standard. It would definitely be worth trying out for the road car. And there's more gold. The Recaro seats grab in all the right places but perch you a tad too high. The exterior modifications (carbon side skirts, front blades and rear diffuser) are quite hard to pick out with the new livery, but the gold wheels do look pretty cool. Finally, don't expect to see that spoiler available any time soon - it's been added to redress the aerodynamic balance thrown out by the roof lights.

So is there anything relevant to take from three fast laps in the M2 Safety Car? Yes, actually, beyond the fact that it's tremendously good fun. It proves how good the M2 is as a standard car, but also that there are clear areas for improvement in its track performance. The combination of the brakes and tyres here in particular stood out, and would be easy enough to add in as an options combo. It could be the Competition Package... Daft though the exhaust here is, a half-way house between this and the Performance exhaust would be incredible. Add in a carbon roof and some light wheels with a tad more power and the really fast one is already in view. It may never happen but experience of this Safety Car is too tempting to ignore - the campaign for an M2 CSL starts here!