We have a quick but satisfying go in the 218hp, limited-run Mini GP

Hero status is assured at the next London to Brighton Mini run if you buy one, but is the second incarnation of what's being dubbed the '

' for brand fanatics only?

The GP version of the John Cooper Works achieved a kind of cult status when it first appeared in 2006 to mark the end of the first 'new' Mini. The UK allocation from the limited run of 2,000 were sold out before the £22,000 car properly went on sale. 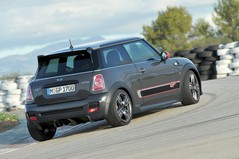 This time Mini says our (unknown) allocation of the similarly restricted run of 2,000 worldwide hasn't yet been snapped up, but at £28,970 you've got to be a serious Mini nut to want one.

Brace! Brace! Brace!
Once again the rear seats are lost to a shiny strut brace and power is up 7hp on the £22,455 John Cooper Works hatch it's based on.

In total 55kg has been removed from the JCW car to bring weight down to 1,160kg, partly helped by the lightweight 17-inch wheels that copy the design of those on the original GP. Apart from the ECU tweak to lift power to 218hp, the GP also gains expensive new springs and dampers that can be manually adjusted to lower the ride height by 20mm for track days. Sticky tyres help with track grip while torso grip comes from some deep Recaros with alcantara covering for the bum and back.

Plenty of luggage space in this Mini

Despite being 35kg lighter than the old car, there's enough sound deadening material this time to stop the tininess of the door slam. A quick run behind a Mini Challenge race car around a short but surprisingly good track on Mallorca won't be as exciting as the rapid 8min 23sec lap of the Nurburgring Mini claims, but we're not complaining.

First impressions? The 1.6-litre turbo engine still sounds bland, even when revving hard. Disappointing that some of the over-run crackle of the Challenge car couldn't be sneaked in.

More so
But that expensive JCW makeover of the PSA Peugeot Citroen shared engine has created a powerful, flexible unit. As the official 0-62mph time of 6.3sec points to, the GP is properly fast and that's leading to some pretty untidy lappery as we work out where the track goes.

As we bump over kerbs it's clear the GP has a very pleasing compliancy in the suspension. Guessing here, but it might a combination of the weight loss and the extra stiffness from the strut brace allowing for more softness without compromising grip.

Unlike with the last GP, there's no mechanical limited-slip diff this time so it does scrabble out of corners. That also sends the stability control light flashing, but to cure that there's the 'GP racing mode' which cuts out all help bar an electronic version of LSD that brakes the inner wheel to cure understeer. Without any interference you can tighten the line with a lift of the throttle into the bend. This is properly good fun now.

The steering is nicely direct as you'd expect from a Mini and the six-speed gearbox doesn't obstruct the shifting. Both are more road than race, but that's where it'll live the majority of its life.

Our four-lap, thumbs-up verdict needs the scrutiny of a proper UK road drive, but as a garage toy the car fits the bill. The gaudy red detailing, deep chin and the roof spoiler are the right show-off touches for a car that doesn't really have to apologise for its existence, not when you've got a fanbase as large as Mini's.