More niche-tastic magic from Mini - or a step too far? 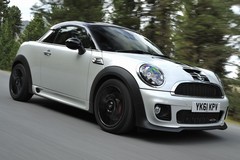 Few manufacturers have exploited the concept of the niche product as effectively as BMW-Mini. A nip here, a tuck there, a sprinkling of SUV fairy dust; before you know it hatchback is joined by convertible, estate and 4x4. All spun off (with the arguable exception of the Countryman) pretty much the same platform. And certainly from the same set of mechanicals.

Latest wizard wheeze from Mini is to turn Issigonis's icon into a rakish two-door coupe. The question is, does it work? Or has Mini really spread its brand too thinly this time?

This is not the first coupe Mini, of course (Broadspeed got there back in the 60s), nor is it even Cowley's first two-seater (remember the wonderfully deranged Cooper Works GP from 2006?). But it is the first full-on series production coupe from Mini. 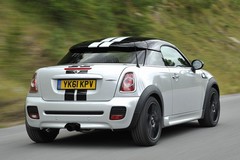 That being the case, it is a bit of a shame that the styling department didn't (or perhaps weren't allowed to) put more effort into the Mini Coupe's looks. We always rabbit on that looks are subjective (and indeed that is of course the case) but coupes are supposed to sell, at least in part, on the basis of slinky, sexy styling, and the Mini Coupe falls utterly flat on that front, to be quite frank.

But however cynical you consider the concept to be, you have to accept that Mini knows its market - and the fact that 3 per cent of its UK sales are already going in the direction of the Mini Coupe even before it has gone on sale rather suggests that they have once again managed to find the head of the nail and give it a great big whack. 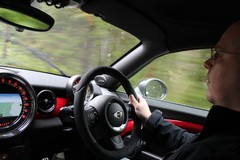 The other thing that you may discover (and this might surprise you) is that the Mini Coupe genuinely does have its own distinct character. No, the interior doesn't feel super-special and yes, you are conscious that it feels like you're driving a Mini hatchback with a lower roofline and less rear visibility (actually almost none - partly because you can't get the driver's seat low enough), but when you get out onto the road you can feel a difference between this Mini and the conventional hatchback.

Given that the Mini Coupe is being touted as the most hardcore series production Mini yet, we felt it only right and proper that we should test out the range-topping John Cooper Works version. This gives you (as it does in the hatch) 208bhp at 6000rpm and 192lb ft of torque, spread between 1850rpm and 5600rpm, with 206lb ft available on overboost from its 1.6-litre turbocharged motor. That's enough to whisk you to 62mph in 6.4secs and on to a thoroughly respectable 149mph flat out.

But performance figures are only part of the story. This car needs to feel agile, athletic and eager - more so than the hatch - if it is to justify its existence. Fortunately (for its own sake) it does. Just. That lowered roofline (30mm lower than the hatchback's) and consequentially lower centre of gravity helps, as do mildly tweaked spring and damper rates and a slightly more nose-biased weight distribution. 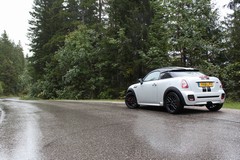 The result is a car that feels maybe 5 per cent more nimble and quick-witted than its more conventional brand brethren. You get he same darty, spritely steering, eager turn-in and roll-free cornering stance as you do with a regular Mini JCW, but slightly amplified. Put simply, it's quite a hoot.

Is it enough to put clear dynamic water between it and more normal Minis, though? Maybe. Is it enough to justify its claim to be a model in its own right? Probably. Will those who buy it care? Almost certainly not.

Because where the Mini Coupe really scores - despite its maker's protestations of uber-sportiness - is in the creation of yet another niche. It has no real rivals. Okay, Mini will talk of Sciroccos and Megane Coupes and Audi TTs and even bottom-end Porsche Caymans. But are you really going to sacrifice the four-seat practicality of a Scirocco for a two-seat Mini? And are you going to forego the mid-engined pedigree of a Cayman for a glammed-up Supermini? Exactly.

And yet if you want an endearingly tiny sporty two-seater with a surprising amount of boot space (20 litres more than you'll get in a Mini Clubman, then it would be hard not to pick the Mini Coupe. Provided you can get over the way it looks. And you're not too offended by the concept of the further dilution of the Mini brand...And you're sure that actually a normal Mini Cooper S JCW might not be a better bet any way, just in case you have to put someone in the back...and you're not keen to save up that extra bit to get into a Porsche Cayman...