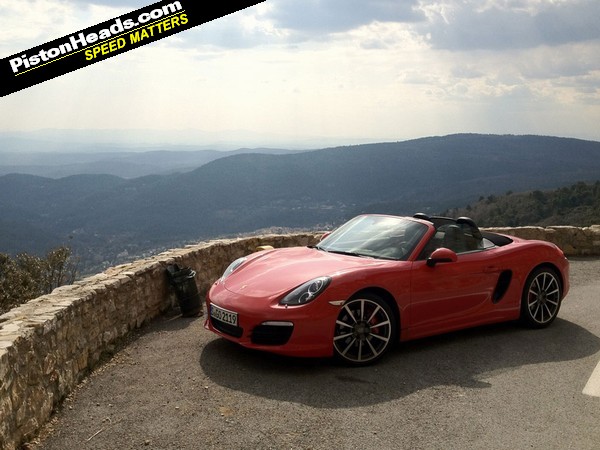 Steering feel - this is a story about steering feel. How you respond to

can probably be anticipated by your reaction to reading the stuff people like me excrete after trawling the adjectives bag. All of it is done in an effort to describe the sensation of holding a steering wheel in a moving vehicle. At this point I can promise that this review will not contain the word nuggety. 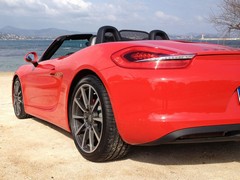 doesn't have much steering feel. There - I've said it. It is possibly the most complete open-top sports car ever made, and it is possibly the best car Porsche currently produces. But for these purposes I can only plunder the thesaurus to make reference to absent sensations: wriggle, squirm, fidget, chatter, patter or writhe (god I hate writhe). The Boxster does none of them.

And yes, the much debated electric power steering fitted to the 991 makes its second appearance in the new Boxster, codename 981. Like the 911, this is an all-new platform with extensive use of aluminium and high-strength steel. The shell is 87kg lighter, yet it is 40 per cent stiffer. The roof uses magnesium alloy sections and despite being physically bigger and carrying more passive safety equipment, the car is lighter than its predecessor - between 25kg and 35kg depending on model.

Familiar favourites
The 2.7-litre motor in the base car is an all-new direct injection flat-six producing 265hp and 206lb ft. Meanwhile the 3.4-litre engine in the S is a revised version of the engine from the last 987 model with slightly increased outputs - 315hp and 265lb ft. Both have variable valve lift and timing. 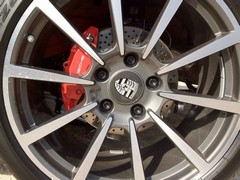 I'm going to concentrate on the S, because that's the one I spent the day in. It was running the spangly, optional 20-inch wheels, fitted with optional PASM (Porsche Active Suspension Management) and a smattering of other options.

Does anyone not agree that this car finally delivers on the styling promise laid down by the original concept in 1993? It's not as dainty, but in stretching the wheelbase 60mm, pulling the front track out 40mm and the rear 18mm - not to mention making the car longer (32mm) and lower (13mm) with a shorter front overhang (minus 27mm) Porsche has taken the Boxster to an LA tuning shop and given it the full number. Where once the wheels hid apologetically within swollen panels, they now push confidently outwards and the whole car sits down into the road surface. To me, it's the best looking Porsche since the Carrera GT.

Theory of relativity
It takes about 10 seconds to spot the steering. The wheel is slightly dead in the hands compared to the old car - it doesn't feel unnatural, just mute. At this point I would sympathise with anyone who went all Bannatyne and announced they were oot. But I would also plead with them to hang around and give it time. In this instance it is always wise to recall the parable of the Caterham R500 and the Porsche GT3 RS. After a drive in the Caterham, jumping into the RS will reveal it as being too heavy and completely lacking in steering weight, communication and feel. For about 10 minutes. Once your body adjusts to the change in circumstances - like eyes emerging from a dark cinema on a bright summer's day - the Porsche will soon feel quite different. 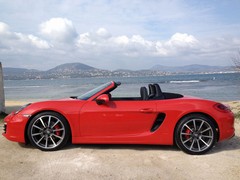 Point the Boxster into a turn and it does two things completely at odds with the expectations laid-down by that initial numbness. It turns with unusual speed and efficiency, then clips the very point on the road you'd been aiming for. Repeat this process for 15 minutes and, like me, you'll be left guppy-like with admiration. This car doesn't do over- or understeer at normal road speeds. Its Pirelli P-Zeros have so much grip, the centre of mass is so well positioned and traction is so good it just carves its way through switchbacks with sparkling finesse. It's only when you're in the middle of such a sequence, placing this car as accurately as any other you can remember, that you have to ask yourself what you are missing with this newfangled electric rack. The answer is simple: wriggle, squirm, fidget, chatter, patter and writhe. Yes, I miss them too, but they fade into insignificance within the overall Boxster experience.

That searing motor makes great noise and pulls very hard from 3,000rpm all the way to 7,500rpm. There is talk of turbocharged four-cylinder motors in the future, but they just won't be able to match the sharpness of an atmospheric boxer-six. Matched with a chassis apparently impervious to understeer it gives you so much confidence to endlessly trim cornering lines. This is helped no-end by the proper manual transmission. Not a doctored PDK from the 991, but a stick-shift from the dark ages: three pedals and endless, blip-tastic joy. 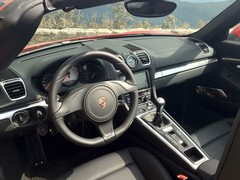 In fact the only blot for me is Porsche's insistence on running the brake pedal so bloody high relative to the throttle: unless the brakes are close to boiling it makes rolling from brake to throttle too difficult. The brakes themselves (330mm steels at the front) are predictably brilliant and way over-engineered for road use. No doubt they will melt at a track day, but that's both obvious and meaningless for a car of this type.

Nope, running fast over the Route Napoleon and its tributary D-roads I was locked in this car's spell. With the PASM set to comfort (Sport is too firm) and the car in Sport Plus mode (sharper throttle, reduced ESP intervention), it rode coarse surfaces with real sophistication but never felt heavy or ponderous in rapid direction changes. It was grippy without being tedious and also gave great confidence. Moreover, it was pleasant going fast and slow: roof-down at a cruise the Boxster can warm your bottom and play tunes, a few seconds later it gives access to what must be one of the best road car chassis out there. As a basis for a new Cayman, it's mouth-watering stuff. 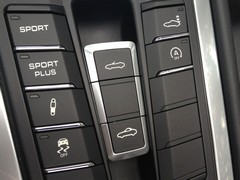 Each one goes 'kerching' when pushed

By far the worst thing about the car for me is the infernal electronic handbrake. It's completely counter-intuitive in a three-pedal machine, it will only engage with the foot-brake pressed and it seems to only exist to extract new combinations of expletives from exasperated drivers. For me, it's a much bigger problem than the electric steering, but then your average photo shoot does contain an unnatural quantity of three-point-turns, so maybe I'm being a little over-sensitive. Whoever canned the manual handbrake but issued a stay of execution for the idiotic Sport Chrono clock needs lobotomising.

Coasting along
Even when you're carping about these few negatives, the car counters with more impressive details. The stop-start hardware is painless and alongside regenerative braking and a coast function for the motor (the moment it spots a coasting situation, it cuts to idle) and that direct injection system it makes for a very efficient 170mph car. Of course I thrashed it mercilessly all day and got it down below 20mpg, but in real life, this is a 30mpg machine. The boggo 2.7 does 180g/km, which is mind-boggling really.

So on first acquaintance, the Boxster is better looking, a little bit quicker, more capable in the turns and offers 10mm more telescopic longitudinal adjustment of the steering column - whatever that means. In the context of the marketplace only one of these really matters: on looks alone the Boxster could plug the hole created by slow 991 sales in the UK. If people choose to buy it based on the way it drives, so long as they can get their heads around the steering, they will own another great Porsche.

Oh, Porsche gave us a cereal bar to eat on our travels. It was nuggety. I lied.