A hot hatch that drifts? Time to see if the Focus RS really lives up to the hype [UPDATED]

"The death of every interesting corner is understeer," says Ford Performance Vehicle Engineering Manager Tyrone Johnson. This is a promising start to the story behind the new

. Tyrone really, really hates understeer. His eyes blaze every time he uses the word. If Tyrone is in the room then understeer had best exit, sharpish.

So Ford has done the seemingly impossible and created a hot hatch based on a front-driven, transverse-engined platform that absolutely, positively will never push on in a corner? Well, towards the end of our track session at Valencia circuit and with tyres past their best, yes, the Focus RS does understeer where previously it had rotated into nice, predictable drifts.

But, for the most part, the Focus RS lives up to the hype. We are officially in the age of the power-oversteering hot hatch. With a driver selectable Drift Mode. This is either a stroke of genius. Or the greatest contribution to the panel beating industry and suppliers of roadside furniture since the French discovered lift-off oversteer in a previous hot hatch era. 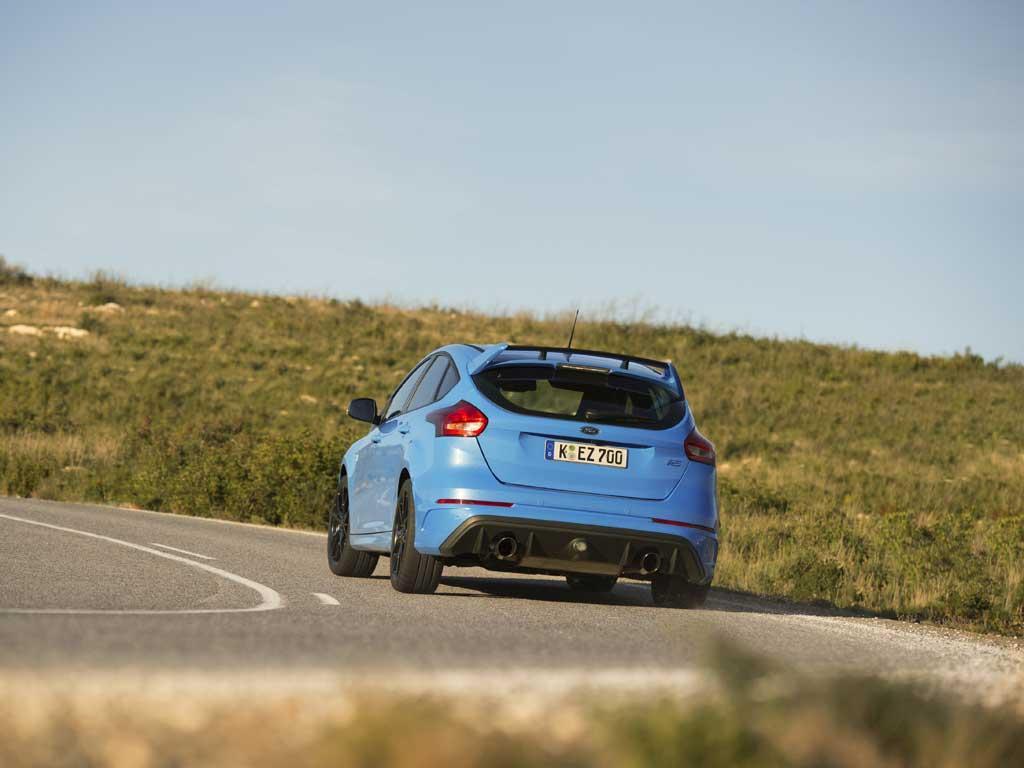 Because, let's face it, when you've been raised on Ken Block, watched videos of idiots on press launches doing doughnuts around cones and are sitting in your new Focus RS are you really going to wait until you reach the mandated closed course or racetrack only environment before trying it out? Of course not. Ford says a cap of 4,000 RS models for the UK market is deliberate to protect residuals; natural selection and the nation's hedgerows will no doubt help the cause too.

Is the Focus RS the wildly oversteering monster we've all been led to believe? No. But, especially at this price point, it does rather embarrass everything else in the sector. Others will have softer plastics in the cabin, a more aspirational image and, perhaps, fancier infotainment systems. But dynamically this is one of the more significant moments in the evolution of the affordable performance car.

The most important thing to understand about the Focus RS is why it handles differently. The Haldex-derived all-wheel drive systems used by rivals can only manage torque split front to back, and even then reactively. The Focus's GKN Twinster set-up has drive permanently going from the front power transfer unit and to the rear differential. It's the clutches either side of it that dictate how much, if any, drive torque is going to the rear wheels. If they're fully open it's front-wheel drive. When they are fully closed it's a 30:70 front to rear split, with the ability to send all of that rear allocation to one wheel or the other. This and a 1.8 per cent overspeed of the rear axle means the ability to give proper torque vectoring. Correctly serviced, Ford is confident the hardware will last the lifetime of the car, despite the conflicting forces and apparent strain on the drivetrain. 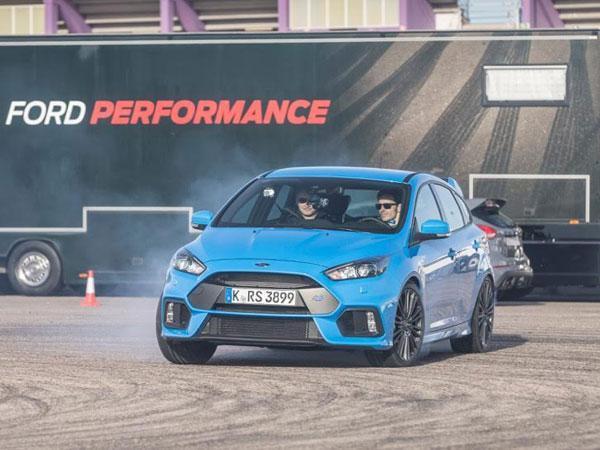 On the throttle the Focus can send more power to the outside wheel to push the nose into the turn and neutralise understeer. Off the throttle engine braking can be used on the inside wheel to the same end. This explains the smile on Tyrone's face when he talks about it and why a Haldex type system was never going to cut it.

On the road and in the default Normal mode the Focus RS feels more agile than its burly 1,599kg kerb weight would suggest. The steering is fast - just two turns lock to lock - and has a predictable, linear rack. Weight and feedback is decent if not, perhaps, as meaningful as that in a Megane or Civic. In the Normal suspension mode it feels keen to lean on its outside front wheel and cock the opposing back one but you don't really sense this through the wheel.

The beauty of the all-wheel drive system is, even if that inside rear tyre is off the ground, it can still send all of the available power to the outside wheel, altering that traditional hot hatch cornering stance into something previously the preserve of Japanese rally reps like the Mitsubishi Evo. Keep your foot in and there's just a delicious rotation into the apex quite unlike anything you'll have experienced before in a car like this. We're not talking Block-esque armfuls of opposite lock here. Just a determined dive for the inside that bleeds out on corner exit into a lovely sense of four-wheel drift. 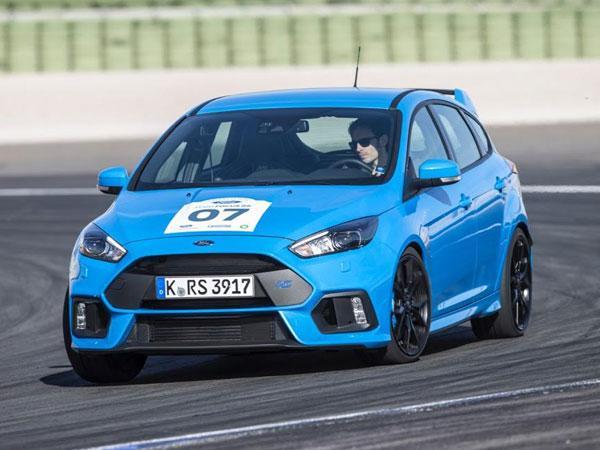 Ride that seems a little brittle at lower speeds opens out, there being decent damper travel and excellent body control to manage the various weight transfers going on around the car. The Spanish test route is mainly super smooth but the few bumps along the way suggest a car that'll monster any given B-road and promises entertainment galore if it's slippy under tyre.

Six parameters - AWD, dampers, steering, engine, stability control and exhaust noise - are managed by the driver mode switch and going one step to Sport ups the noise and aggression while maintaining the standard damping. Now you start getting the more extrovert bangs and pops from the exhaust, which is fun, and a little more springiness to the steering's self-centring, which is less so. Track only (honest guv) Track turns everything up to Sport, though you can decouple the dampers via the column stalk if you want. And then you have Drift. If you prefer to drive with ESC fully off - and you will - you need to hold it down every time you swap modes.

On the road Drift would seem the best all-round mix, given it has the aggressive turn-in but Normal steering and dampers for a more natural feel. In reality it's a bit odd, the unnatural, torque vectored tug into the turn making you feel you have to wind a degree or two of lock off to compensate.

For all-round use Normal feels the most linear and predictable. If you never drove it in any other mode you'd be entirely happy. Tellingly this is the setting they use at the 'ring and, no, they're not discussing lap times. 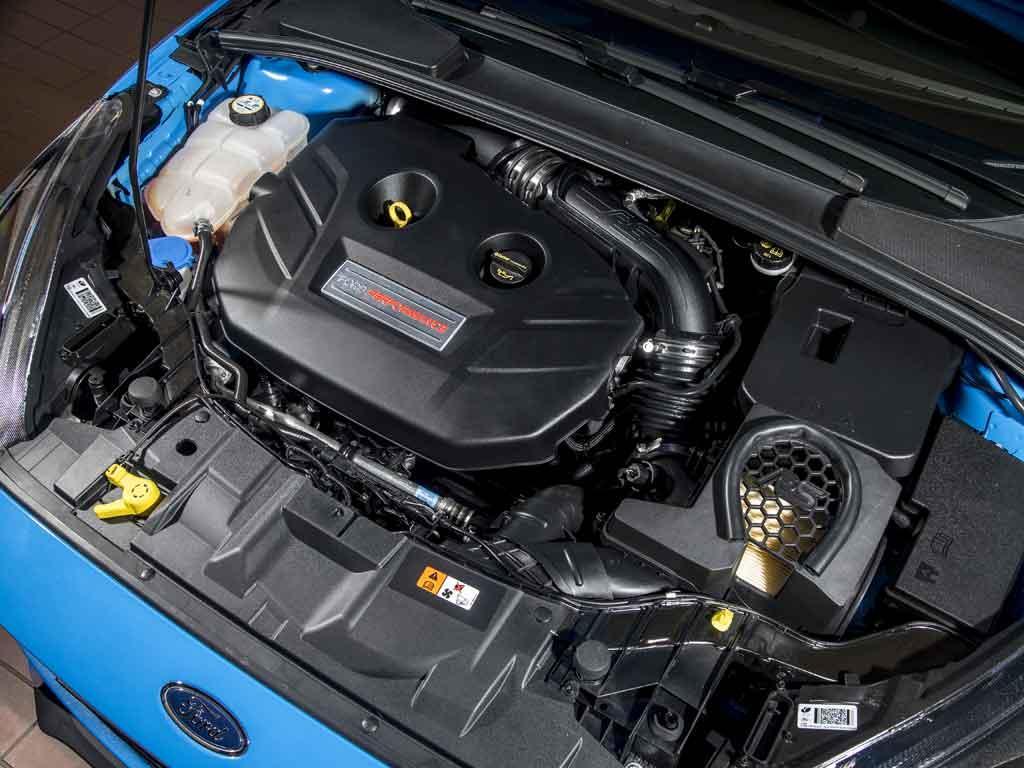 The engine feels strong too, but again it needs to be when you look at that kerbweight. The extra 300cc over most rivals is telling, that and the twin-scroll turbo unique to the RS (the Mustang version of the same motor has a conventional one) meaning it doesn't have the binary, boosty feeling found in the VW group rivals. Reviness was a design goal and sufficiently convincing for the limiter to arrive all too early; in-gear grunt is sufficient that you find yourself leaning on the torque more than chasing the redline.

This RS is more of an all-rounder than any that has gone before and if there's one thing missing it's the expected tarmac spitting ferocity found in rivals like the A45 or Civic. It's incredibly quick but, just perhaps, a little more cultured than diehards may like. Or looks suggest.

On track that ability to dictate cornering line on the throttle becomes even more entertaining. Amusing as it sounds Drift mode still feels a bit weird but, well, it's there for one thing and one thing only. In Track and with stability control off it's plenty keen to tighten its line with the throttle and even power through that into sustained four-wheel drifts. These aren't traditional dab of oppo, on the lock stops rear-wheel drive ones; more an early apex, rally-style, all four wheels straight through to the exit stance that'll be counter-intuitive for track traditionalists. But huge, huge fun. Again that weight is a factor though, the RS feeling a little blunt at the limit.

Track regulars are probably still best served by the likes of the Megane; the Focus has a much broader range of talents but is more naturally inclined to fast road use with the occasional circuit foray. Given the driving style it encourages it might start getting a bit expensive in tyres too - there is a Cup 2 option available as a dealer accessory but at around a grand a set (to be confirmed) it's going to cost you. 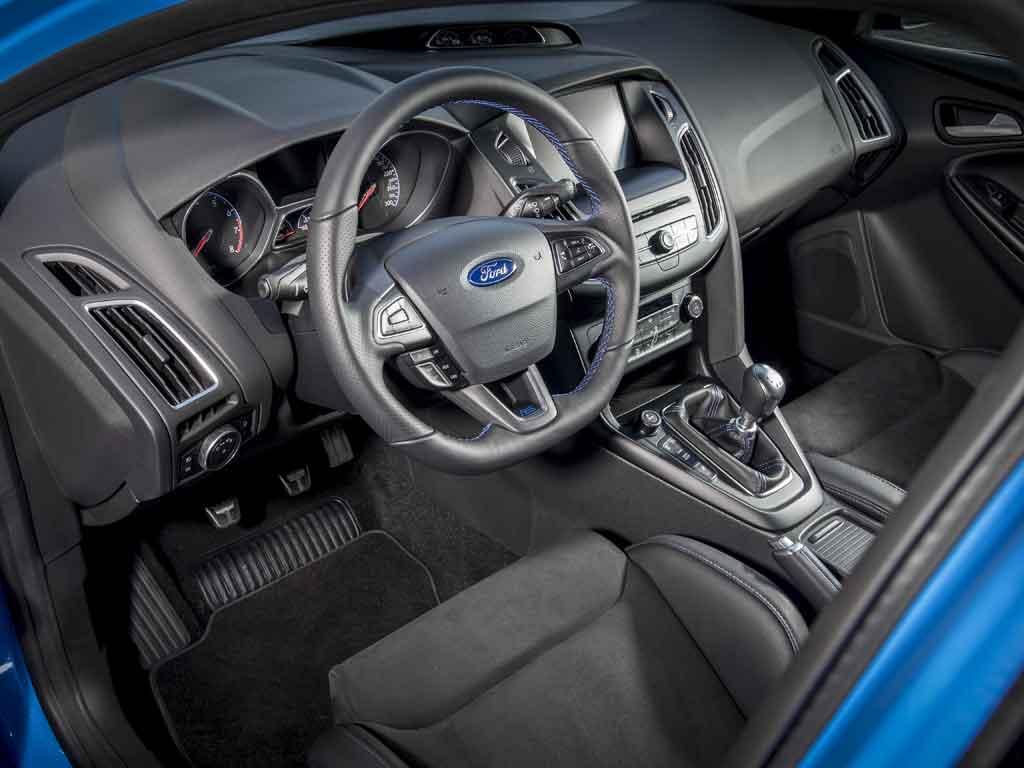 Weight, what about a dual clutch?

Negatives? The lack of a dual-clutch option may put some off but Johnson - predictably - didn't want the additional weight over the front axle. From the outside the car sounds ace, with a wicked crackle even in the Normal mode. Why the need for fake, synthesised noise over the speakers then? It's not as bad as some but still fairly loathsome in practice and principle. And while the optional shell-backed Recaros look brilliant, grip you firmly and are way better than the over-bolstered standard ones they're still set too high - a recurring Focus RS theme many will be familiar with from the previous car. Some will still sneer about the image of hot Fords too but, frankly, they are probably people you'd want to avoid in daily life anyway.

In conclusion, yes, the Focus RS is a triumph, albeit a qualified one. Everything comes at a cost and, while the oversteer antics are amusing, the hardware required to achieve them blunts the RS's edge compared with lighter, more agile rivals. For the money, for the entertainment value and all-round ability though, yes, it's the real deal. If you want one you'll be needing to get in there quickly.

Take a look at Dan's full lap at Valencia here.