The i30 N has spawned a new variant, one with a larger boot and bigger price tag. But don't hold that against it 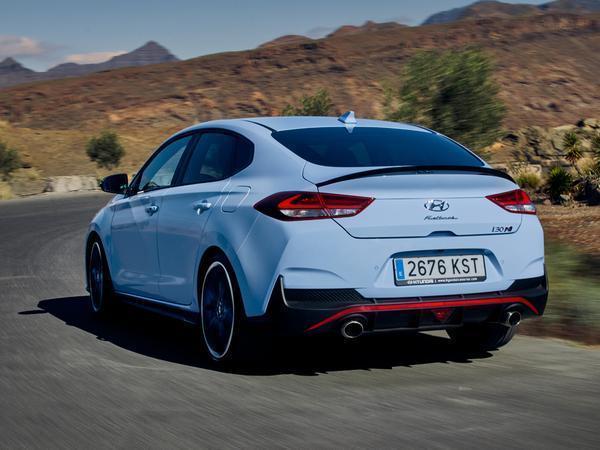 You have to commend Hyundai. Instead of resting on its laurels after the successful launch of its N brand - which included 7,500 European deliveries of the i30 N in 2018 - the firm's engineers have kept up the pace of development. So much so that already we're confronted with a new car, the i30 Fastback N; a sleeker version of the hatch we've become accustomed to. But it's actually far more than that, because the changes go more than skin deep and include suspension and chassis tweaks, all of which are said to be the result of early feedback. Which says a good deal about the intent of this fledgling performance division.

We shouldn't be surprised. After all, it's still headed by Albert Biermann, the engineering guru formerly of BMW, and not the sort to person to underestimate the opinions of an enthusiastic new fanbase. Some, it would seem, have called for a slightly more resolved ride over challenging surfaces - and even those of us accustomed to even more unrelenting cars than the i30 can accept that a model specifically designed to go head-to-head with the Golf GTI might benefit from a somewhat broader character.

This is exactly why N division engineers have sought to enhance comfort when introducing the Fastback version. We first broke news of the changes back in August after a drive in the prototype, which gave us an early indication as to how the raft modifications felt before they were properly calibrated. Now, however, we're meeting the finished production car, and it has 6mm longer polyurethane bump stops that are also 10 per cent softer, a front anti-roll bar that's five per cent softer and new springs to match. At the back, there's also a new rear camber control arm. Meaning the improvements are a bit more substantial than a few tweaks here and there.

First up for this new, softer, more sensitive i30 N? A race track, obviously. The Circuito de Maspalomas to be precise, a technical beachside track on the south coast of Gran Canaria. With the same 2.0-litre engine up front (available exclusively for the UK market in Performance Pack 275hp format, because the 250hp base model accounts for precisely 1.8 per cent of sales) the Fastback fires up with a familiar burble from the twin-exit exhausts. In fact, the only indication you're not in the hatch comes from the minuscule rear view provided by the steeply raked glass out back. Other than that, it's all standard i30 N, which is to say still lacking any real drama on the inside. Hyundai believes buyers of the Fastback N will probably be slightly older than those of the hatch (more on why shortly), so perhaps cabin sparkle matters less to them. We'd still like some more standard-fit flair, though.

We're at the sharp end of a convoy as we drive out onto circuit under offensively warm winter sunshine. Straight away, the car shows off established i30 N traits: strong traction even with some lock on and brakes that appear to defy the 1,516kg (including 95 per cent fuel and a 75kg driver) they've got to stop from ploughing into the Atlantic Ocean. It exits hairpins eagerly, the electronic limited slip diff (part of the Fastback N's standard-fit Performance Pack) juggling torque with only slight tugs through the steering wheel. You still need to manage throttle inputs to stop excessive slip, but you can chase it rather than hesitate, which is immensely satisfying.

It's not until a quick left that swiftly follows a crest that the Fastback N begins to feel like a changed machine. As you approach the section you're applying a small amount of right lock before hammering onto the brakes, the car going light over the top of the crest just as you need to counter rotate the wheel to get the car tucked into the fast left. Experience in our PH Fleet i30 N suggests this is a time to expect a small kick of oversteer - the non-Performance Pack N would probably provide an even bigger one - but the Fastback N feels more planted. With ESP off in the most aggressive N Mode, there's only a small amount of movement at the back; route one stuff when more stability has been asked of the chassis.

Less amusing, too? Well, the thought does occur - and with it the unwelcome idea that the i30 N might have traded some of its fun-loving adjustability on the limit for not much real gain. Fortunately, the second its 19-inch wheels (also standard with the Fastback N's higher base spec) mean real-world tarmac, that fear proves unfounded. While it's not night and day different to the hatch, the Fastback seems more settled, less intimidated by speed humps and ridges, and undoubtedly a more relaxing place to sit at road pace thanks to the rubberised response now found at the end of the damper travel.

It is the sort of subtle change which reduces fatigue on a long drive; not one which subverts the character of the car. It's almost heartening to report that N mode - the silliest of the drive modes - is still too firm. Sport is effective at eliminating almost all roll at road speed anyway, although Normal is so good without being harsh that you wonder whether it's worth exploring further on a public stretch. Body control has not been hampered by the changes beneath the Fastback one bit, neither has its steering response or feedback, which remain very good. So too, the engine's racey nature and comical exhaust, which echoes its pops and crackles through the island's valleys.

What there is instead is the residual sensation of what the track drive highlighted: that slightly enhanced feeling of rear-end stability, perhaps brought on by the new control arms, or maybe the fact the rear's 12kg heavier so weight distribution is better. Or maybe it's a combination of all the changes. Whatever the root cause, this increased grip requires you to push that bit harder to encourage playfulness - but also makes the Fastback easier (or more reassuring, at least) to push on in.

For the more mature buyers Hyundai thinks will choose the Fastback, dependable cross-country pace is probably more desirable than on-the-limit dynamism - and it's arguably delivered a variant that's more rounded, more capable and slightly more practical, too (the boot swallowing 436 litres to the hatch's 395). Moreover, at £29,995, it's a little more expensive than the upstart Performance Pack'd i30 N, signifying its position as the thinking man's choice.

Of course, if that thought doesn't appeal, it's worth mentioning that the Fastback's chassis alterations are destined to migrate to the hatchback, meaning even the non-Performance Pack i30 N will gain the comfort enhancements. Significantly though, the entry-level model will also retain its slightly less sticky Michelin Pilot Super Sport rubber (the more expensive versions are on P-Zeroes), which conceivably means that it could yet be the N to offer the ideal breadth of abilities; mixing accessible playfulness with the welcome improvement to ride quality. There's a thought. Now if Hyundai could just get someone to spend less money...