? Amid the 'extreme performance', 'super sports car' and other hyperbole the one I keep overhearing Lambo boss Stephan Winkelmann utter is ... usable. 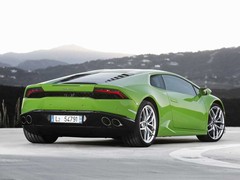 Huracan - a poster boy for a new generation?

For what though? Under Winkelmann's immaculately tailored reign - the man does a good suit - Lamborghini has really come of age. They're touchingly dismissive of that other Italian supercar brand, swagger round in branded Automobili Lamborghini apparel and still have the feel of a small, close-knit team with enormous pride in what they do. There's the Trofeo motorsport garnish but tacit if unsaid acknowledgement that many regular customers are in it for the pose. Nowt wrong with that either.

Thankfully 'usable' for the Huracan's presentation doesn't involve demonstrating its prowess as a four-wheeled posing pouch on London's posher streets. Nope, we actually get to drive it on a track, the same one in fact we visited just a few weeks ago with the McLaren 650S. 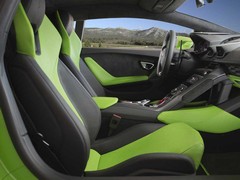 As sharp looking inside as it is on outside

Like the Lamborghini, the McLaren makes a great play on its ability to be a viable everyday runabout doing normal car stuff. As well as a face bending mentalist where conditions allow.

The build-up to actually driving the thing has involved a lot of talk but when the moment comes it's a case of piling into the first available Huracan, following a bright green Aventador pace car onto the track and, with a cheery "let's go boys!" from its driver over the radio, letting rip.

Having established all the cars on the launch event have the Lamborghini Dynamic Steering and MagneRide adjustable dampers I leave the ANIMA switch on the wheel in Strada for the first lap to establish a baseline for further exploration. 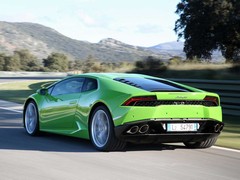 Dialling in what seems like an appropriate amount of lock for Ascari's first tight second gear left I look through the corner and, oh gawd, it feels like we're going straight on. Expecting the high-geared dartiness of a 458 or the enhanced bite of the 650S the wheel instead spins against flimsy and insincere weighting and doesn't seem to inspire much turning force.

On a charge
The words of Lamborghini's chief test driver Giorgio Sanna from the tech launchecho in my head. He tactfully described the (thankfully optional) Dynamic Steering as a nice gimmick. Well, he's got the second bit right. Suitably wary I try and feel for some load in the front tyres for the fast left-right that follows. Above 50km/h the rack, which can vary anything between 9:1 for low-speed arm-twirling to a more relaxed 17:1 at higher speeds, tightens up but it's still a game of second guessing how much lock you want and how much the adaptive rack is going to give you. Worse, when it senses understeer it actually throws in a 'correction' that feels for the world like opening the steering a tad. Erk. The last time I felt steering this synthetic was in an Audi RS5 on the same circuit. Join those two dots... 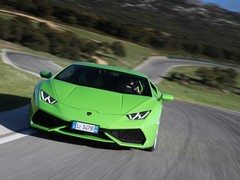 Now with a fully active central diff in place of the Gallardo's viscous coupling, power can shuffle from the default 30:70 to as much as 50 per cent front or 100 per cent rear. At this stage though I'm not sure if it'll go to the already overloaded front wheels or rearwards to help tighten the line. Do you feel lucky, punk?

Cycling through to Sport increases the weight at the wheel and narrows the extremes of the rack variance but it's not the same as feel. Still, the V10 sounds and feels usefully angrier and unleashes outrageous fusillades of bangs and pops with every lift and downshift. It's theatrical but a damned sight more convincing than the piped in induction noise of McLaren's Intake Sound Generator. 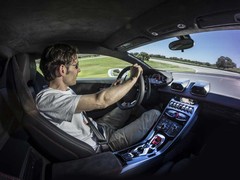 'Is this enough lock to get around the corner?'

And here Lamborghini's persistence with big capacity and atmospheric induction really pays off. Every application of throttle triggers a momentary sneeze of fuel and air through the black crackle finish intake plenums behind your head before this is drowned out by gnashing valve gear and then the bellow of the exhausts. Happiest beyond 5,000rpm, the 5.2 V10 thrives on revs and though graphs promise faster pick-up and flexibility than the Gallardo peak torque still doesn't arrive until 6,500rpm. By 8,000rpm you're 250 away from getting your full 610hp but even in Sport and manual mode the upshift comes in automatically just as your fingers tense on the large, blade-like shift paddle.

Only in Corsa mode will the new dual-clutch Lamborghini Doppia Frizione gearbox run out to the limiter, which always seems to happen a nanosecond earlier than you'd want. You need to flick the shifter as soon as the needle reaches '8' or the limiter will arrive before the shift. It's also fairly cautious on the way down the 'box, a conscious count of 'one and two and' necessary before attempting a downshift. It is smooth though and you can shift mid-corner in a way you'd have never attempted in an e.gear Gallardo. 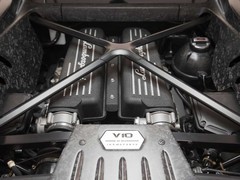 Finally in Corsa mode a sense of focus and poise starts to come through. The chassis is still very neutral and fairly disinterested in lifts and weight shifts, that lack of faith in the front axle limiting your confidence even with trailed brakes into the apex. Beyond that it scrabbles, grips and goes with only the smallest hint of rotation under power out of tighter corners.

Corsa work
Chatting with aforementioned test driver after a couple of sessions on track he makes the fair point we're running on Pirelli P Zero street tyres, not the impending optional Corsas we drove the McLaren on. And after three laps they're starting to go off, just as we're gaining confidence. He's driven the Corsas and says they give a much more positive turn-in and sense of connection. But as the pace rises and the tyres struggle to keep up finally a more playful side to the Huracan's character emerges. Chucking it about and getting aggressive with the weight transfers wakes the chassis up and though it doesn't feel as intuitive as its closest rivals a sense of fun appears. Just as the brakes start to feel a little past their best. 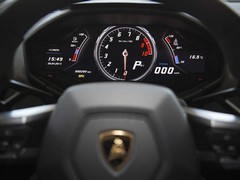 Track time over it's time to try the Huracan on the road. The official route is 65km back down the Ronda Road but there's time to spare, I've the luxury of being on my own and a full tank of fuel. Improvising a route gives me a chance to play around with the fancy new TFT screen and its various options of full map, partial map and shrunken 'dials' or more traditional rendered 'analogue' rev counter taking centre stage. Losing the traditional central screen has done wonders for the interior design and having the nav in your line of sight works brilliantly; we're told it took some convincing for 'the group' to allow it but credit due to Lamborghini for standing firm. Coming to a TT near you soon, too.

On the rolling Spanish A-roads the Huracan feels much more comfortable in its skin. Pegged back from those final tenths of the performance envelope it's more at ease with itself and frustrations like missed shifts and unpredictable steering fade away. Replaced with 'oh cripes' when the speed readout is located on the TFT screen. The thing is relentless in its appetite for speed, addictive in its need for it. 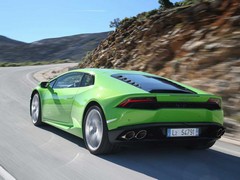 Much more in its comfort zone on the road

Overtakes that would be in-gear in the

require a couple of downshifts in the Huracan but that's no chore given the speed with which they go through and the noise that results. And 610hp is, let's say, adequate.

The damping is brilliant too; quick, composed and never upset even when the roads get suddenly more lumpy and bumpy. Sport and manual shift (auto impressively rattles through up- and downshifts but is a bit busy) is the preferred choice but Corsa is perfectly acceptable for road use and about the overlap with an Aventador's base setting. Meaning those graduating through the range will be both familiar and aware there are further steps to be taken in the Lamborghini world. 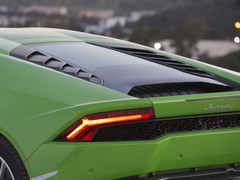 Tyre roar and a busy 3,000rpm-plus at 130km/h detract from the cruising abilities but back down to urban speeds and to Strada mode and Winkelmann's promise holds true. The Huracan will tickle around, turning heads and making noise when required, but is miles more civilised and, yes, usable than a Gallardo.

Dynamic disappointments remain confined to the very extremes of its performance envelope and merely in comparison to some exceptionally talented rivals. Where it really matters this is still an exceptionally rapid and exciting car with other strengths the 458 and 650S can't match. On the road it holds its own and as a piece of design it's stunning; single minded and every bit as dramatic as you'd ever want. Leave the Dynamic Steering box unticked on the spec sheet, spend the money instead on a lairy shade of paint and let the Huracan play to its strengths.