Show-car looks and a revvy, naturally aspirated V8 under the bonnet - has Lexus's moment finally come?

Let's start with the

's exterior styling. I'll dive in and call it bold, because that feels a pretty safe word to use. Safe in the sense that you are either looking at it with a curious admiration. Or through gaps in the fingers of an outstretched hand, much as you would if you decided to look directly at the sun.

Either way, Lexus will be pleased, because you are not looking at the LC and shrugging your shoulders. You are looking at a Lexus and thinking 'I want to know more'. And that in itself is a triumph, and a credit to Toyota boss Akio Toyoda, who has already earned a place in our hearts by forcing through the Toyota GT86 against the wishes of his bean-counter-in-chief. 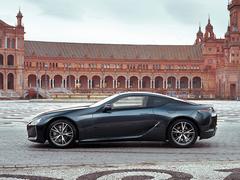 Distinctive in the finest Lexus tradition

The saying goes that to make an omelette, you have to smash some eggs. Toyoda must have been in a Gordon Ramsay-esque rage when he came up with the recipe for this LC. First there was a new boss, who happened to be a designer with no engineering, marketing or spreadsheet experience whatsoever. Then there was an all-new platform, called GA-L, which makes its debut here. Finally, back in 2012, came the

that went down so well that Toyoda turned to his people and said, "I know it wouldn't pass a single crash test in the world, but I want you to make it."

Build it and they will come...
And here it is, pretty much as per the concept car. Sure, it's higher and generally more accommodating, which is a good thing if you're over five-foot and intend to sit in it. But overall it has the concept's look and feel. There's a choice of a 477hp 5.0-litre V8, modified but largely as found in the RC F and GS F, and now linked to a 10-speed direct-shift automatic. This being Lexus there's also a 299hp 3.5-litre V6 petrol/electric hybrid with a total power output of 359hp and a gearbox so complex it would need a review all of its own to explain.

But, far more important than any of that, within the chassis, suspension and general set-up there sits a development philosophy that can trace a direct bloodline back to the single-minded focus that gave us the LFA. Now you're listening, right? 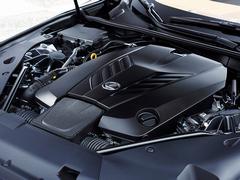 You might reasonably think comparisons to the LFA are merely hype. I thought so too, but then I met the chief engineer, who told stories of sitting down with the LFA's chief engineer before he even started work. Then you look at details such as the carbon fibre roof fitted to the sportier versions. Or perhaps the driver's dash display. Or the seating position, with its spot-on pedal positioning. Or the fact the battery is in the boot, to land a coveted 52:48 weight distribution. Or the engine position, which is so far back in the bay you'll grant them the 'front-mid' claim. The list goes on, and if you spec the sportiest of the sporty models (there's standard, Sport and Sport +) you even get a bespoke seat, positioned so the height difference between backside and heels is slight enough to have you landing with a bump on the upholstery. All the better for letting the car telegraph what it's doing - or about to do.

Walk the line
The chassis is a mix of materials chosen for strength and weight, but you expected Lexus to say that. However, Lexus has also gone to extreme lengths to anticipate the fact that even the stiffest chassis will flex eventually and the suspension will move, and to ensure that when it does so it is an entirely linear way. There's no shyness here about admitting the LC is not a white knuckle sports car; better, they reason, to let it cosset the driver and lure them into more delicate thrills.

Lexus folk will tell you that they have aimed the LC's dynamic make-up somewhere between the Porsche 911 and Ferrari 488, which is nothing if not a glowing testament to their optimism. More broadly, they admit the target cars for the LC's full repertoire include BMW M6, Mercedes SL and Maserati GT models, which seems altogether more realistic, and no less ambitious. 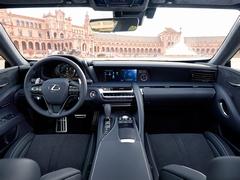 Our test cars were a V8-engined Sport + and a V6 hybrid in the standard trim. We'll start with the former, given it's more to PH tastes. More so when you discover it adds the Lexus Dynamic Handling system, including a variable ratio/variable weight steering unit, rear-wheel steering and a limited-slip diff.

The result is really rather special - partly because it is surprising to discover a Lexus can be so absorbing, but mostly because it is simply bloody good. At fast road pace there is a delicacy to the steering that's quite addictive. Sure, it is electrically assisted and you know it, but you certainly get a clear sense of what the front wheels are up to. That rear-wheel steer also adds an extra dimension, putting the rear end into play with the front. Odd cambers, big mid-corner bumps and seemingly optimistic throttle applications are dealt with, and the diff tucks it all in and launches you on. A firm low speed ride gains suppleness at higher speeds. Even heavy braking is dealt with without fuss. Here is a car that sucks you in and only resorts to some safety-first understeer if you really balls things up. The folk at Ferrari won't lose sleep, nor likely at Porsche, but here is a car that notches up some big name scalps among front-engined, rear-drive 2+2 rivals.

Up your game
Amazingly, the chassis shades the engine. The V8 is no shrinking violet but you do need to toggle it in Sport S mode (the penultimate of six on offer) for its punch to match its soundtrack. Once there, it's a peach, maximum torque arriving at 4,800rpm and maximum power at the redline of 7,100rpm. Response is instant and linear and for that we also need to give praise to the 10-speed gearbox. The top three or four gears are really there for refinement and economy purposes. The rest are evenly spaced and the selector is sage enough to switch up or down rapidly (as fast as any dual-clutch) to keep you in the sweet spot of the rev band. In auto mode it's a revelation, and the manual shift is pretty sharp too. 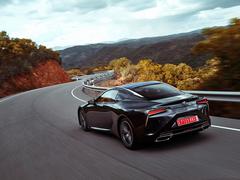 ... engaging drive was more of a surprise

On this road it's so far, so wow. But away from this environment it's a touch too firm in ride and, though beautifully finished and appointed, the interior is too fussy and the interface with the car too bewildering. Overall, however, it's a revelation. Lexus promises the LC500 is the first of many more sporty Lexus models, and on this evidence that's a very good thing.

Less so, the 500h, I suspect. But there are caveats, not least that the car we tried was the base model and - sans extra dynamic kit - it isn't as much fun. While the hybrid system is enjoyable at seven-tenths, it scrabbles around too much beyond that. The electrical assistance is impressive and intriguing, but the union with the engine is not as seamless as we'd like and the clever 'fake gearshift' system within the CVT-like gearbox not quite as beguiling as it is technically mind-blowing.

But let's not end on a negative: where the hybrid model is decent, the V8-engined model is truly a bit special, chiefly for the fluency with which you can make progress. Dwell on that for a moment, because it's quite a landmark statement to make about a Lexus and exactly what they were aiming for when they made this car.

The looks might be the natural place to start talking about the Lexus LC. But the drive will stick in your consciousness just as long.