Less weight, more power but more cost as well for the Evora - time to drive it!

Poor Lotus Evora. It is literally impossible to discuss it without attempting to put it into context against Porsches of similar money and purpose. Is it a step up from a Cayman or a more affordable alternative to a Carrera S? Damn, see, it just happened again... 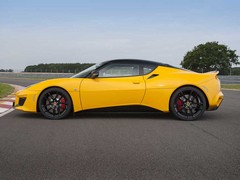 With its £72K pricetag and 406hp power output this new Evora 400 appears even more difficult to pin down. It's £10K more than the

you can buy (actually, you can't...) but a similar amount less than an equivalently powerful 911 Carrera S. So is it a mid-level sports car with ideas - and a price - above its station? Or a true junior supercar for half the cost?

Lotus will tell you the latter. The numbers suggest they might be onto something, the fact a development car slashed six seconds off the Hethel test track time of the Evora S it replaces underlining how much of a step up this is in performance terms. Six? Make that seven, Lotus development guru Gavan Kershaw casually slicing another second out of the time the other day in one of the production cars assembled for the press launch.

Some numbers, quickly. It's about £10K more than the Evora S it replaces, is apparently two thirds new and now weighs 42kg less despite gaining a bunch of new kit including a chargecooler circuit for the supercharger. There's a standard limited-slip differential, a new interior more easily accessed via lower, thinner sills and a bunch of other upgrades aimed at saving weight, reducing production time and improving quality while saving costs. The looks have lost some of the delicacy of the original car but add some visual weight to the promise of significantly more potent performance. 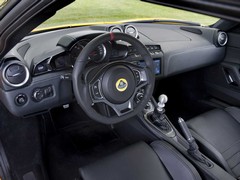 This, then, is the first really significant Gales-era Lotus, the brand's

combining hard-headed pragmatism about the Evora's need for headline grabbing punch aligned with core Lotus values like saving weight and managing cost. Portrayed as the bean counter Hethel desperately needed, Lotus insiders are keen to underline his long-held passion for the brand too.

First experience of the 400 is on the Hethel test track. The Evora has a much wider operating brief than the Exige S, which can get away with a degree of harshness in pursuit of hardcore track thrills. The Evora has to be able to channel that spirit but also have daily usability and compliance enough for the traditional Sunday morning B-road blast.

The Evora's dirty secret is that it's not actually that light, the 1,395kg unladen weight merely 20kg or so less than Cayman or a Carre- oh, there we go again... Its trick is in making it feel from the wheel like it is a sub-tonne Elise or Exige, the flickable sense of agility immediately evident in Hethel's opening corners.

Likewise the compliance that has always been a Lotus hallmark. You can take huge bites of kerb, the springing firm but compliant and perfectly matched with the revalved Bilstein dampers. Rates have been stiffened at the back to cope with the extra power while negative camber has been increased up front to give the front end extra bite, offsetting the push from the limited-slip diff - the reason Lotus has traditionally resisted fitting them. The power is such it's now required say the engineers. 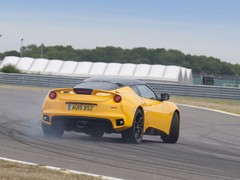 No rival can match the Evora's delicacy and feedback, the lovely wriggle of the wheel in your hands and fluidity of the passive damping a rare treat in the modern age. The brake pedal feel is bang-on too, bigger discs all round clamped by AP calipers giving huge confidence into the corners. Kershaw is a big fan, this and the stabilising influence of the diff under braking meaning he's happy to lean on full ABS intervention into the tight chicane after the squeaky-cheeks Windsock corner. We'll take his word on that but even at a more modest pace it's clear the Evora is absolutely planted under braking.

Comfort blanket
There's a little comfort blanket of understeer on turn-in but if you want things a little more exciting a nip and tuck lift to back the car into the turn gives you a host more options, dictated by four levels of stability control. Open-diffed Evoras did this too but with the extra power and the Quaife there's more throttle adjustability to play with. Helped by a new lighter flywheel the Toyota V6 fairly zings its way round the rev counter and has a lovely linear power delivery and instant, precise throttle response. The sight of the by-wire throttle servo isn't quite as evocative as visible linkages opening individual throttle bodies but nice to see all the same, the only downer being a rev limit that cuts in about 500rpm before you'd want.

No complaints about the pace though - this is one rapid car and able to pull hard from low revs and then sing all the way to the redline. The new three-inch exhaust sounds ace with the button-controlled flap open, there being the option for a quiet mode for noise-restricted track days or when you simply want to keep a lower profile. 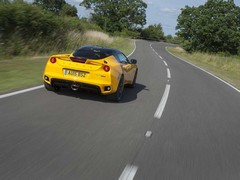 Still little to match a Lotus on a British road

Only the occasionally baulky gearbox spoils what is an otherwise rich sensory experience and an impressive plucking of the heartstrings by this significantly faster and more accomplished Evora.

Even the automatic option - disappointing in the Exige and previous 'IPS' guise in earlier Evoras - seems much improved. Hand on heart it's still no patch on the PDK or ZF eight-speed gearboxes used by many rivals. But shift speeds are quicker, reactions to the paddles are less hesitant and it does a passable job of keeping up with the pace when you take over via the paddles.

And it is. But while you can rationalise that increase in price with the extra performance and generous standard kit it still brings with it a level of expectation the cabin struggles to satisfy. There's a new dash and heater controls and it looks stylish enough. But whether driven by cost or weight saving (likely both) there's a flimsiness to the switchgear those accustomed to the German rivals will simply find laughable, the visible tremors in the new centre console over bumps and track kerbs an unfortunate visual reminder. Likewise the Alpine infotainment unit, the aftermarket vibe an inevitable compromise smaller manufacturers face compared with the economies of scale available to bigger manufacturers. 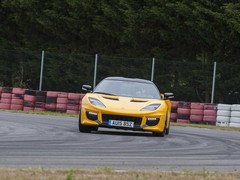 Now much quicker on track - is that enough?

It seems harsh to mark down the Evora on what are really superficial points when the more substantial ones like the driving experience are a cut above. But, sadly, day to day these things matter. Given the resources available and the need to keep to the Gales script of increasing sales but reducing costs you couldn't expect more from the Evora 400. And as a driving machine it has purity and feedback unmatched at any price, combining raw pace with a delicacy overtyred and overgeared Porsches can only dream of.

Whether that's enough to gloss over some lack of polish in the final details will depend on your personal priorities. It's got the traditional Lotus dynamic polish, now emboldened with some serious pace too. But it's apparently become more expensive while ending up feeling a bit cheaper, which is worrying given the increased expectations the pricetag brings. Gales has put his limited stake behind raw performance being enough to win over new buyers to the Evora. You can't argue with the logic and if the Elise and Exige are unlikely to bring in conquest sales that puts a heavy burden on the shoulders of the Evora 400. It's a brave punt and one you have to hope pays off.