It might sometimes seem that there's a bit of a cosy conspiracy between car companies and motoring journalists when it comes to magnifying the importance of small differences. Manufacturers enjoy some secondary PR impact for minimum extra bang by inviting hacks to come and have a turn in a new variant; we get to prove our critical superpowers by detecting and dissecting barely-there tweaks while topping up both air miles and suntans.

So it's fully understandable if your reaction to the 570GT is to say it's a Sports Series with slightly more luggage space. It pretty much is; yet it's also elegant proof that even apparently small changes can have big effects. 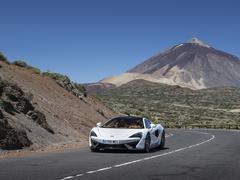 From Woking to Tenerife

McLaren had thoughtfully laid on for comparison purposes.

The GT's steering is fractionally lower geared than the S's - itself faster than the 650S. We're told the change was made to increase the feeling of stability at higher speeds, but it's only really noticeable in terms of the slightly increased hand angles necessary to negotiate hairpin bends.

The GT's chassis settings have been softened- spring rates go down by 15 per cent at the front and 10 per cent at the back when compared to the S, and the variable dampers are retuned to match. Rougher road surfaces persuaded me that the GT does ride better than the S, but then I switched to the S and found it more pliant than I remembered. Blindfolded and sat in the passenger seat of each in turn I think you'd struggle to spot a difference.

As for performance, there's really nothing in it. The 570GT weighs an extra 35kg over the S - about the same difference as brimming the tank from half empty - and there's zero change in the subjective amounts of wallop delivered by both. Indeed one of the challenges in the GT remains reminding yourself that, 540C aside, this is the entry-level McLaren. The official numbers put the GT two tenths of a second slower on the 0-62mph dash - 3.4 seconds is hardly hanging around - and another tenth adrift by 124mph (which McLaren claims takes 9.8 seconds from rest, versus 9.5 in the 570S.) Both 570s have identical 204mph top speeds. 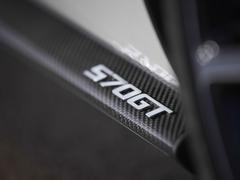 Yet the dynamic similarities don't matter in the slightest; the GT is an outstanding car, one that still manages to be different enough to broaden the appeal of the Sports Series without compromising any of its core values. Indeed, in the unlikely event I find £150,000 in coppers and old car wash tokens in the change jar, a 570GT would be pretty close to the top of the list of ways to spend it.

It looks good, like it was designed this way from the start - the taller rear looking just as valid a rear-end treatment as the S's kurz heck. Indeed the GT manages to deliver its own spoiler alert, with its lack of wingwork and the way the glass roof and tailgate flow together giving it the cleanest lines of any modern McLaren.

There's always something appealing about extra utility, especially when it's delivered as stylishly as this. The 570GT is no Audi RS4, but the 'Touring Deck' storage area that sits behind the passenger compartment and above the mid-mounted engine is a brilliant idea, as is the side-hinged glass tailgate that accesses it (with the hinged side changing depending on whether the car is left- or right-hand drive.) 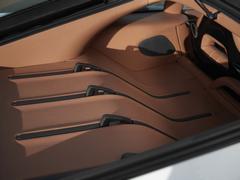 Space behind the seats is usable. Really

More space than a Focus

Yes, the Sports Series Coupe has some storage space behind its seats, but this can only be accessed from inside the cabin and carries a prominent warning label admonishing you not to put anything too heavy onto it. The GT's deck is properly usable; I honestly doubt that owners will trust anything to the fractionally bigger under-bonnet boot space (or 'frunk' as the Americans put it) unless it either won't fit at the back, or they need to hide it from view. Total capacity between the two compartments is 350 litres, although anything too big in the back wipes out rear visibility. For perspective, a Focus hatchback manages 316 litres with the rear seat in place, so on paper the GT has it beat.

The Touring Deck is trimmed with durable feeling leather and includes a couple of tie-down straps stout enough to get me considering a tortuous gag including a former motorsport boss's favourite party costume. Fortunately my lawyers advised me strongly against it. McLaren was clearly keen to allay fears that the heat from that mid-mounted V8 will broil anything that's carried above it, or maybe just concerned that I would starve between breakfast and lunch, and provided a Fortnum and Mason hamper packed with goodies - tough gig, this - which emerged from a 90-minute thrash along the amazing roads that climb to the Teide Observatory unspoiled. You probably wouldn't choose a GT to haul chocolates across the Mojave in the middle of summer, but it's still pretty impressive.

The GT's panoramic glass roof makes almost as much of a transformation as the rear deck does, making the cabin feel much lighter and brighter than the coupe, subjectively bigger as well. Despite the lower sills it's still a bit of a clamber to get in and out past those front hinged dihedral doors - the GT is unlikely to appeal to anyone giving up their Conti GT or Vanquish because of arthritis. Inside the cabin is beautifully trimmed, the central control screen looks good and works well, and there are lots of cubbies and storage compartments. Including ones in the doors well enough hidden to satisfy the all-important playboy jewel smuggler demographic. 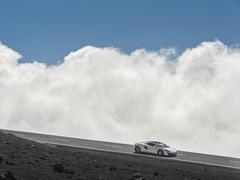 Take it to the road

McLaren claims that the GT is the most road-focused car the company produces, with owners likely to spend up to half their time in it on motorways and rarely taking it on track. And with both the powertrain and handling switches left in Normal (or simply not bothering to activate the dynamics control panel, producing the same effect) it does feel impressively laid back, especially when I deliberately adopt the sort of 80 per cent pace that better represents how an owner would likely drive these roads, rather than the typical flat-everywhere pace of a press launch.

Like the 570S, it's really good - light-feeling, responsive and keen without getting over-eager, the substantial torque of the turbocharged V8 making serious progress with little apparent effort even with the gearbox shifting early in Drive mode. Although the GT gets steel brakes as standard, McLaren had upgraded all the cars on the launch to the optional ceramics; a shame as I've yet to experience non-carbon stopping in a McLaren. These worked tirelessly, but felt slightly inert under gentle road use. Subjectively it doesn't feel quieter than a 570S, as there's still a fair bit of thrum through the tub and from both engine and exhaust, but the optional upgraded Bowers & Wilkins audio system we suspect many owners will be tempted into is astonishingly good.

Yet the GT is also just as good at going quickly, and doesn't feel in any way like a poor relation to the 570S. Nor - as we said when we first drove the Sports Series - does it really give much away on road to the 650S. Stand hard on the brakes and they come instantly good, the transmission does its back-punching torque bump thing with the powertrain selector in Sport or Track and - with the fuse lit - it's so horizon-nuttingly fast you have to keep reminding yourself how close to the bottom of the McLaren tree you are. 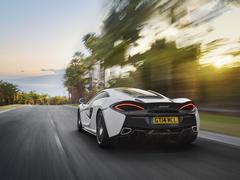 In the same way that mid-sized hatchbacks always find themselves compared to the Volkswagen Golf, it's the fate of every sports car to be contrasted with the Porsche 911.

The logical pigeon holing would be to see the 570GT as being closer to the Turbo or Turbo S while the 570S competes with the GT3, but that's definitely not the case - both McLarens are in the space between those two extremes of ultimate 911. The GT is definitely closer to the Turbo than the 570S is, but it's still got enough dynamic bandwidth to get close to the GT3 on raw thrills when you want it to.

Despite its name the 570GT hasn't been transformed into a pure grand tourer, although it's probably about as far down that road as any McLaren is likely to go. Both it and the 570S are responses to the same question, but both are equally correct answers.